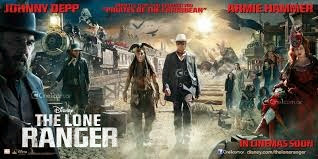 Despite their better judgment, my wife and daughter agreed to sit with me during the latest attempt to bring a childhood favorite hero to the big screen.

Despite every previous attempt during my lifetime being a total fiasco, I tried to keep an open mind.


Did I get to see successors with the same levels of presence and dignity as Clayton Moore and Jay Silverheels?


Did I see characterization and environments that followed the carefully designed rules that established a true definition of the masked rider of the plains?


Did I see the Lone Ranger as an unknown entity behind the mask, only appearing out of it when in disguise?


Did I see an unspoken bond between the Lone Ranger and Tonto that united them in single unwavering focus and purpose through their quest for justice, beyond trust and friendship? 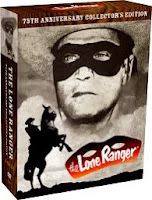 Did I see MY Lone Ranger, who’s image has been reinforced in my mind by the availability of digital media? (Thanx, Mom!) 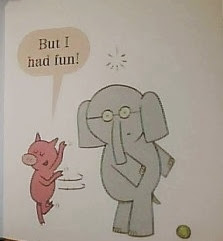 Seriously, this movie was a hoot and a half!

At one point my daughter complained that you saw the Ranger's face, and I had to explain,
"When the film is this good, and this much fun, stuff like that doesn't matter as much anymore."

It was chock full of adventure, humor and inspiring daring do for the whole family.

This is unsurprising giving the production posse’s previous piratical pictures.

A) A reference and homage to the creation of the characters in 1933 and their enduring popularity. Bonus points for showing the Lone Ranger and Tonto riding Silver together, as it started out on the radio series.

B) An indication that this is not the story, nor the individuals that would be known from the original tales.

C) A demonstration that the film makers understood the importance of the link between this kind of hero and children.

The adventure itself featured over the top, entertaining action, and emotionally engaging characters. More importantly, it maintained a fundamental feel good extravaganzaness, which along with the connection to kids referenced above was sorely lacking in one other super hero re-imagining this summer I could mention.  This was even demostrated in story through the proper placement of young Dan Reid.  His impressed reactions to his uncle's new persona and Indian companion personifies the connection these characters have to kids.  (And makes it believable that his tales will inspire his decendents into some masked adventuring of their own.)


The film was clever enough to both poke fun at, yet still make sure to use and show the importance of, certain out of place in a modern story elements of the Lone Ranger narrative:

The Ranger’s code against killing, and shooting the guns out of enemies’ hands

The Ranger’s use of old fashioned fisticuffs

The Ranger’s being polite and well spoken

The names Tonto and Kimosabe 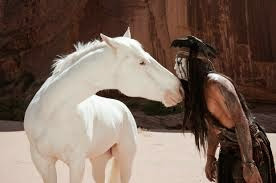 I was impressed by how they achieved displaying the mask was both
1) Silly
And
2) Important, central and iconic to the character.

The Silver Bullet also was initially mocked, but treated with the awe and respect it deserved when the time came.


It was the actors that really made the combination of humor and impressiveness work. 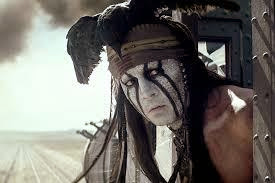 As can be seen in the trailers and the billing, this film was, for a large part, Tonto’s story. Johnny Depp was insane and awesome, which by itself is no surprise. However, it was impressive that he was able to pull off a completely different insane awesomeness from the Captain Jack insane awesomeness he displayed in the Pirate films.

Helena Bonham Carter added a spectacularly over the top performance as the lead professional in a house that the TV or radio Lone Ranger would never have been allowed to mention, much less enter. However, in the context of the new story fitting the characters into a more historically accurate West, it worked nicely. She was complimented by the more down to earth, but equally capable Ruth Wilson, as Dan Reid’s widow.


Disney is known for both its villains and the fates that befall them. Amping up Butch Cavendish to levels of horror beyond the typical western outlaw expanded his threat considerably. Kudos for the “Wendingo” reference. Even though it was geographically misplaced, it added to his menace.

Many Disney Villains have met their ends following a horrendous crash, a long fall, or being buried beneath enormous piles of rubble. Extra credit for managing to combine all three on this one, guys.


I have left Armie Hammer’s performance as John Reid/ the Lone Ranger and Hans Zimmer’s work on the music for last as they intertwined at THE key point in the film.


Zimmer’s score was epic as always and definitely worth adding to my ever growing pile of soundtrack albums. (Sorry, Honey.) It was a perfect complement to the gorgeous western vistas the movie took place in and around.

Hammer gave a fun and energetic performance as the over idealistic, law before all minded Easterner returned home. His interactions with Depp’s Tonto as his fish out of water tale progressed drove the plot.

In the “real” version of the Lone Ranger story, once he recovers from the Cavendish ambush, he simply had all the skills and prowess needed to be the Ranger. There were no details to the origin; he was what he needed to be.

I was concerned after seeing the trailers that this film would give us a Ranger completely trained and designed by Tonto, and I feared that would greatly diminish the character.

Those worries were unfounded, however. While he did take a longer path, and there were several stronger assaults on his belief system needed to reach his destiny, it did happen on its own. There’s really no solid, logical explanation for the transformation of the out of his element, Harvard trained lawyer, John Reid into the Daring and Resourceful Masked Rider of the Plains. It simply happened fully and completely when he realized what he needed to be…

And that was the point, where after only slightly teasing it earlier, Zimmer’s score blasted out with the uplifting strains of the William Tell Overture. 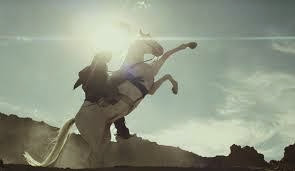 I am not ashamed to say it brought a tear to my eye.

Not only because it brought back all the emotions it generated, hearing it as a small child in my own thrilling days of yesteryear when I was first introduced to the heroics of the Lone Ranger,

But, more importantly, because I know it will serve as an introduction of a whole new generation of kids to my hero.

Good to read a review of this movie from a different perspective.
I originally thought that this movie was just a bad idea.
"Leave the classics alone".
But turning on a new generation to the story might just be worth it.

Many thanx. They really do go out of thier way to indicate it's a classic legend everyone knows, then provide a retelling with the same cores, but modern sensibilities.

Here's hoping enough people see it to get a sequel.

Wow...what a review! Great Stuff!
I wasn't sure if I wanted to see it for many of the same reasons...but you changed my mind!!!
My biggest obstacle now....babysitiing.

Thanx! Babysitter? Aren't your girls about the same age as my daughter? You don't need no stinkin' babysitter! We need to take this opportunity to get the cry if "Hi yo Silver!" echoing across the playgrounds again.