Ask anyone who’s seen me try; it’s a deep seated problem. I inherited none of the dancing side of the family genes, and any little bit of rhythm I possessed got channeled into juggling. I’d say the best I could do was a Baloo imitation, but that would be an insult to Disney, Phil Harris, and the grand circus tradition of dancing bears.

The worst part of these shows is: while it’s wonderful to watch your child on stage, there are a near infinite numbers going on before and afterwards, especially when they’re young and only have one or two dances.

My Dad summed up the problem nicely (which I shall now embellish to fill space):

The problem isn’t watching the oldest dancers, because they put on a well planned and performed artistic display.

The problem isn’t watching the youngest dancers, because anything can happen...

Considering their choreography consists of:

1) Rock back and forth for a minute.
2) Do one forward roll
3) Pray that everyone’s potty training holds out.
The myriad of events that occur on the stage is truly staggering.

Plus there’s the bonus entertainment of the occasional little boy drafted into classes by his dancing family. The lad’s body performs the routines perfectly, while his face is the personification of boredom and a desire to be elsewhere.

The problem comes from watching set after set of the dancers in between, who basically do what the older ones did, but badly.

Or to be more polite- do what the younger ones did, but without:
Wandering aimlessly into the stage decorations
Deciding to sing a song different than the one they are dancing to
Beating on each other at random

HELPFUL HINT #1
With the younger classes’ limited experience, sometimes it is very difficult to tell which style of dance is being performed. After having sat through far too many of these presentations, here is a guide to the dance types:

A stage full of what appears to be receptionists suddenly exploding with grace, fluidity, and high kicks that could take out a ceiling fan = Teachers’ Dance

There is one deep insight I gained into this art form from watching these shows. Anyone learning to dance can put their limbs where they should go at the proper beats of the music, but only a DANCER makes it look like they were supposed to be there in the first place.


The first intrusion of dance competitions into my icky boy movie filled entertainment spectrum came from catching So You Think You Can Dance on a family vacation. That show, however, lacked any real staying power in our house once the particular season ended and the draw of Benji Schwimmer and Travis Wall looking like the second coming of Astaire and Kelly was over. There were only two important long term effects.

The first was the beginnings of knowledge of the Ballas and Schwimmer families’ Axis of Power over nearly the entire competitive dance universe.

The second and more influential effect was my introduction of “Artsy-Fartsy” into my daughter’s vocabulary, complete with demonstrations. She’d dance in one direction saying, “This is artsy,” then reverse and say, “and this is fartsy.” (Surprisingly we never got any letters from her teachers about this, or any of the many other informative things I’ve taught her.)

HELPFUL HINT #2
How to tell if a dance has wandered dangerously into Artsy Fartsy Land
- Rolling around the floor
- Bare feet
- Slow motion walking
- Weird shoulder motions
- Trying to grab invisible objects
- Bonus points for trying to grab invisible objects while making weird shoulder motions and rolling on the floor in slow motion with bare feet.

NOTE: If the dancer starts juggling or doing contortions, you’ve travelled deep into Artsy Fartsy Land and have entered the Cirque de Soleil. Lock your doors and u-turn immediately.

When we similarly stumbled upon an episode of Dancing with the Stars, on a later vacation, I figured it would be equally short lived. Boy was I wrong. The show had much more staying power for a variety of reasons (not the least of which is a profound lack of artsy fartsyness).

First of all, let me say that it isn’t the costumes. My wife is from Peru and watches Telenovelas regularly, and has had occasional subscriptions to the magazine about them (which got me dirty looks from the neighbors when I pulled it out of the mailbox, and sad disbelieving head shakes when I said, “It’s my wife’s.”) There are ample opportunities in our home to see revealing costumes without pretending to like dance. (In many cases frighteningly ample…I swear some of those implants can block those women’s line of sight. They must be using helium instead of silicone.)

I believe the appeal of the show, for me, comes from two places. One is simply: I very easily get caught up watching people both knowledgeable and enthusiastic about a subject. This is why I didn’t get into Pink Floyd at all until I saw The Wall with my friend (a fan since shortly before his own birth) who talked me through the whole thing. I bought the album, and Dark Side of the Moon, the next day. The dancers and judges are prime examples of this level of informed excitement. 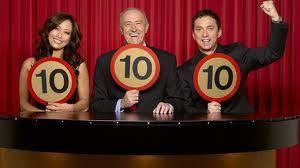 The other part is the teaching element. With the stars having to learn each dance and step, it creates an easy to relate to story line. Plus, because of all the instruction there is a great deal of explanation. I can’t completely enjoy something without understanding it. Besides trying to glean information from the lessons and comments in the show, I found myself looking dances up online and even picking up a bargain book about them. The reason for all the research was to try to figure out what the judges were talking about in their critiques (outside of their obvious focus areas of Technique, Emotion, and Performance. If you’re a fan of the show, you know who is who, and if not, I’m kind of amazed you’ve read this far…Thank you!) This led to an embarrassing side effect.

In order to watch the show all together, we record it after our daughter is asleep and play it back with her the next day. (We have tacos and everything, it’s quality family time with a catchy soundtrack.) What this means is we know the scores before we watch the dances. My wife was stating that she thought the performance we just saw was very good and didn’t know why the scores were as low as we’d read. I pointed out a couple deficiencies I noticed…and then Len (the head judge) repeated what I said nearly verbatim. This caused me to need to dodge a flurry of throw pillows while attempting to proclaim that I was, in fact, straight. The end of each show usually leads to our daughter doing her performance of the night (for which we give her nines and tens) and then her choreographing a number for me (for which she awards me, on a good day, threes. Real quality time, I tell you.)

There is also the additional appeal of seeing celebrities that have been off the radar for a while. It’s kind of like this generation’s Love Boat, but with the stars in better shape, slightly more highbrow dirty jokes, plus no one got voted off the Pacific Princess. (Seeing has been actors tossed over the rail might have saved that show for a few more seasons, but there’s no time for that idea right now.) Heck, there was even a Charro cameo in one sketch.

More entertainment comes from the differences between various types of stars. The actors work on throwing themselves into the role of each dance and trying to learn how to convey the proper emotions; whereas the athletes have the ability to use all physical criticism constructively and know how to practice for maximum effect. Reality stars tend to know how to coast on their own image. This highlights something I (and apparently every other fan) believe, that the voting system clearly broken.

First of all I think the judges, who understand the requirements far better than the general public, should have more power. (I think that about political elections too, but there’s no time for that idea either.) The multiple votes thing is the real problem though. It lets individuals with a small but rabid fan base outlast people with a much broader appeal and more talent. It’s interesting to see what behavior loses one’s support though. Apparently it is OK to be generally rude, classless, and insult the tradition of the dances…but fart on camera and you’re gone. It’s also educational to note that the American public will often reward improvement more than actual results…which may also explain much about our political system.


From watching this show, and those years of recitals, I have learned I will never be a DANCER.

This is not only due to a genetic lack of ability.

Real DANCERs exude a total sense of both individual freedom and a connection to something greater than themselves. It’s visible not only when performing, but even when they walk across a room if music is playing. I understand the complete devastation caused by an injury that would prevent them from feeling that freedom and connection again.

Considering I ripped a tendon on the second mini mosh jump to “I Wanna Be Sedated,” I won’t be trying to attain that great feeling, only to inevitably lose it, anytime soon.

On a more positive note: While the ladies of the house have gotten me into a show where hard hitting NFL stars earn the nickname “Twinkle Toes”, my daughter and I have managed to get my wife into SyFy’s Face Off. It’s basically American Idol for those who aspire to be Rick Baker. When it’s off Dancing season, we still have our taco night, watching heavily tattooed and pierced horror obsessed artists try to create the best viscerally mangled monstrous fiend… 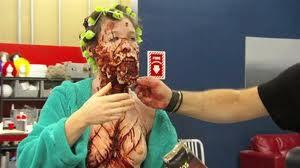 It's so true about putting you arms there, and making it look like they belong there. I'm at the point now where I finally know where my feet and arms are supposed to be at each part of the songs at Zumba, but nothing makes me feel more spaztic then dancing between the current owner and the former owner's daughter, they always carry themselves so beautifully, their arms "BELONG" wherever they put them, I on the other hand may get them there, but I always feel like I look like a drunken orangatan.

There's so much I could say about the drunken orangutang comment, but I'll just say thanx for reading instead.

What I don't find fair about this show is that you have a non-dancing star whose talent is say, singing, pitted against a 'non-dancing' star who is a figure-skater. Hardly seems fair.

I think that's where the "voting for improvement" thing evens the playing field. If someone starts good, but doesn't grow, they tend to get voted off.