Sometimes, there are no right words.

Most of the key emotional ties to Up the Lake are due to the kids.  Many adults aren’t visibly upset when the summer ends, until it's time to say good bye to the little ones.  Part of the connection comes from seeing the joy, freedom and activeness the place brings out in them, part of it is witnessing succeeding generations enjoy the same things you did, and part of it is watching them grow up as each year passes.  I feel a great sense of pride when now adults (that I still think of as kids) come back Up the Lake, and tell me they remember that I introduced them to a game they really enjoyed or a novelty song or comedy routine they still laugh at.  Those kinds of connections are what make Up the Lake as special as it is. One of the problems with strong emotional bonds, like anything worthwhile in life, is that the better and stronger attachments you form the more danger there is of being hurt when they're lost.

I still picture Jay as the little boy playing Marvel and Talisman and singing “Shaving Cream” over and over again with his cousins (or belching along to "Its a Gas"). Even though he wasn’t a little boy anymore, he was far too young.  Jay was only 22 when a car accident took him from his family.  I feel really stupid saying anything about pain and loss, because I know that even though Up the Lake is a family, the effect on his actual family is indescribable.

There are no right words for something like this. None. Everything is inadequate, nothing explains it and there is no justification.  As a defense mechanism, I guess, I fall back on quotations of others.
Read more »
Posted by Jeff McGinley at 2:00 PM No comments:

For the rest who realize the ‘80s were more of a state of mind than a time span: Join me, won’t you?
Read more »
Posted by Jeff McGinley at 2:00 PM 4 comments: 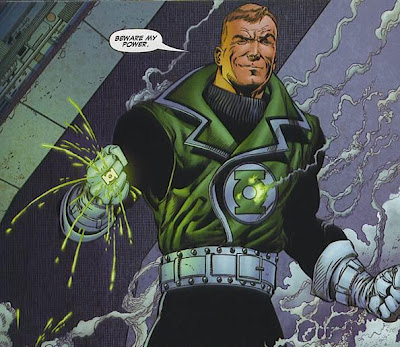 Almost two years after the exam that started my whole ride down the healthy life road, I needed to go back for some of the same tests.  The reason was a combination of “It’s a good idea” and “I had no symptoms when I had a major blockage.”
Frankly, I was extremely nervous because if I discovered that, despite all my changes to diet and exercise, and all my excellent medical care; blockages were still forming, what the hell do I do now?
Read more »
Posted by Jeff McGinley at 2:00 PM 4 comments:

A Carnivore’s Guide to Cardiology: Exercise to me is like standing still, only faster

Ever since my knees and calves have informed me in no uncertain terms that we would no longer be doing this running thing anymore, life has become a series of pieces of equipment designed to cause me sweat and discomfort in order to elevate my heart rate while remaining in one spot.  This recumbent bike is the latest example.
Read more »
Posted by Jeff McGinley at 2:00 PM 2 comments:

I’ve always been a fan of First Person Shooters. They used to feel much more immersive than third person games, adding an element of fun to the explosions.  I developed what (for me) was a decent amount of skill at Operation Wolf, Operation Thunderbolt, Space Gun, Lethal Enforcers, and others after countless piles of wasted time and quarters at the arcade.  That genre adapted particularly well to the point and click shooting method of PC games as well.  Therefore, I was very excited to find out how my previous skills would translate to the exciting new graphics and game play of the PlayStation 3.
After some initial research I settled on what sounds like a minor league sports score instead of a battle game - Rainbow Six: Vegas 2.  This was my introduction to the idea that there are different TYPES of first person shooters. All of my experience translates into the “run and gun” or arcade type…buying a tactical shooter may have been more of a tactical error.
Read more »
Posted by Jeff McGinley at 2:00 PM No comments:

I heard Katy Perry’s “Last Friday Night” recently, and realized that, compared to Friday nights back in college, that song might as well have been written on another planet.
Here are some lyrics that better match the Friday nights I remember at good old Rensselaer Polytechnic Institute. 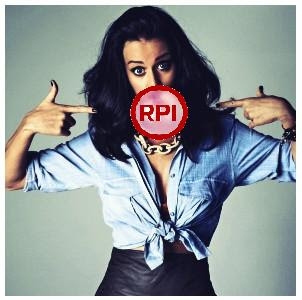 I make fun of G I Joe the Rise of Cobra a lot…because it deserves it.

However, I did see it twice the week it was released, several times since, and it remains   mindlessly enjoyable, a hoot and a half, and full of crazy action.
While not quite as good as the original Transformers, it’s also not nearly as dumb and drawn out as Transformers 2, and a close third place for the summer of 2009 (Star Trek is still way in the lead; I think I liked Monsters vs. Aliens a little bit more than Joe, it gets bonus points for jokes about classic Fifties’ sci-fi.)

Every time I try to talk about this movie, though, I can’t help complaining about what they did "wrong", proving that I'm a total geek, I suppose.

The overwhelming impression is that its a two hour big stupid pile of fun that flies by just as fast on each viewing. (There are probably spoilers below, but seriously, if you're looking to G I Joe for intricate secret plot elements, I can't really help you.)
Read more »
Posted by Jeff McGinley at 2:00 PM No comments: 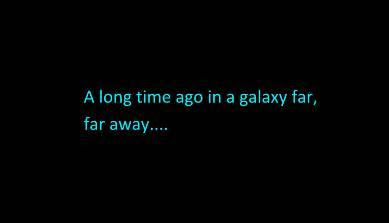 OK, it was 1977 in the Bronx, but I can be forgiven some poetic license on my hundredth post, can’t I?

My folks took me to a movie I hadn’t seen any trailers for, but the newspaper write ups made it sound like my sort of thing.  (I kind of pity the youth of today, who have access to every single detail of films months before they premier, now.)  After a lengthy mysterious underground trip we arrived at the theater. (Again, probably just a subway ride, but - poetic license.)

The room darkened, the above words appeared, and suddenly the screen exploded with the most awesome thing I had ever seen in my young life.  There was a brief pause for my brain to process: 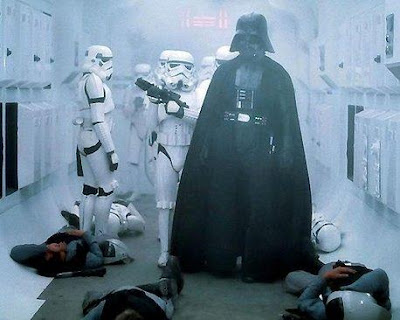