Almost two years after the exam that started my whole ride down the healthy life road, I needed to go back for some of the same tests.  The reason was a combination of “It’s a good idea” and “I had no symptoms when I had a major blockage.”
Frankly, I was extremely nervous because if I discovered that, despite all my changes to diet and exercise, and all my excellent medical care; blockages were still forming, what the hell do I do now?
I went in for both a nuclear stress test and an echocardiogram on January 17th.  I reached level five yet again on the stress test, which would have made me feel good…except for the fact that the last time I was complimented on making level five; I was in the cath lab the next morning.
Additional good news of the technician telling me “I wouldn’t worry,” after the echocardiogram helped a little, but I remained quite clenched for the rest of the day. I was outwardly calm, though, only checking my phone every thirty seconds or so.
Fortunately, I got a message the next morning indicating all the numbers were great, I’m very healthy, and should have no concerns.  This called for a major celebration.
Even before the diet change, there was a fair amount of healthitude in my eating, due to knowledge of my genetic history, and a wife and mother willing to work at it to help me.  My mother’s cheeseburgers are always made with super-lean beef and fat-free cheese, and my wife’s are more often than not chicken or turkey.  Therefore, in the past, once every couple of months, I’d splurge and have a drippy real cheeseburger. (Or as Uncle Billy calls it, a REGULAR PEOPLE'S cheeseburger.) Though the cravings still hit, I have ignored them for the past two years.
My daughter has recently discovered she likes cheeseburgers. (Which almost doubles the selection of things she likes on many kids menus…apparently picky eating is genetic as well.)  Therefore, due to her new expertise I let her pick the location for the New Comics Day-Cheeseburger celebration.  We made a stop at the Blackthorn in Parsippany, before my returning to a life of rabbit food, grilled lean things and oatmeal.   I splurged on a near mooingly rare, bacon and blu, Jack Cheddar, half pound Angus burger, with fries and a draft Bass ale.  The only conceit to my new lifestyle being the addition of grilled portobellos. (That is how far I have fallen…nothing tastes right without mushrooms on it.)
The reason for all this meal detail is I would love to be able to share all the numbers I achieved through diet, exercise and medication:  Ejection fractions, cardiac output, etc.  Sadly, I cannot do that, because after that decadently delicious dinner, which may hold me over for the next couple of weeks, there is only one thought in my head: 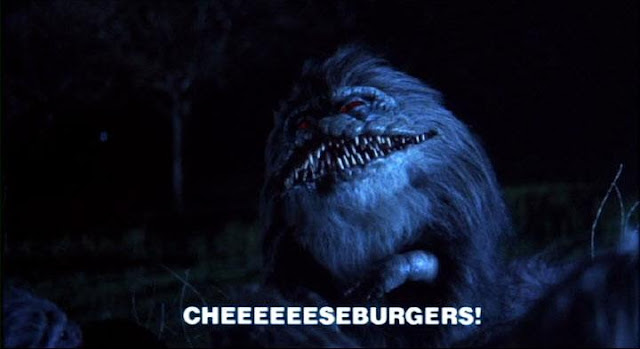 Because of that, instead of helpful medical insights, I will let Mr. Lunt leave you all with the song I have been singing since I got the message from the cardiologist.
Posted by Jeff McGinley at 2:00 PM

Many thanx, the hard part was remembering how to eat the thing...there was droppage.

Very awesome Jeff, I am in awe. You know, saying AWEsome and all.

Many thanx Bri, and thanx for overusing the word "awesome" it's a good segue for Thursday's post.