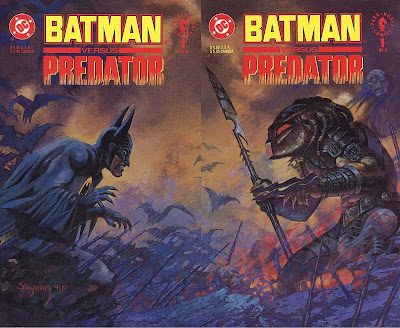 My first exposure to the four color version of Predators wasn’t in their solo comics by Dark Horse Publishing.

Dark Horse (as illustrated by their name) was the first comics company that decided they couldn’t compete head on with DC and Marvel in superhero worlds, and took a side route of focusing solely on licenses, some of which the big two previously held and allowed to lapse.

Instead they had multiple series based on different movie and TV show franchises.

The first Dark Horse title I bought was an absolute “need.”

On my weekly pilgrimage to Aquilonia, the comic shop in downtown Troy, December of my Junior year at RPI, I walked in the door, and was greeted by both alternate deluxe covers of Batman vs. Predator with the two foes facing each other.

In 1991, Marvel and DC hadn’t crossed over in nine years, and the new age of them crossing over that would lead to the Amalgam Comics series was still a few years away.   And the lead up to that was DC crossing characters over with Dark Horse and other third party companies.

These crossovers helped the Yautja stand out in ways that didn't happen in their own solo titles.

First of all, a large section of the standard Predator comic had to deal with the introduction and definition of the creature’s human opponent.  In this case, that’s covered by two words, “I'm Batman!”  That allowed much more panel space to focus on the Predator’s style and culture.

The other huge advantage in an intercompany crossover is that since money and legal deals have to be exchanged for it to happen, the top creators get assigned to it. In fact, multiple pages in each issue were top artists showing the two square off. 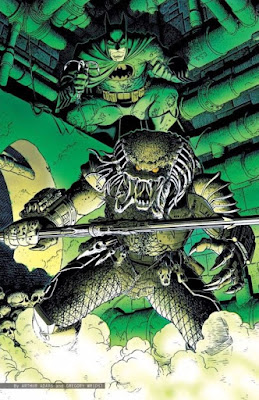 That first one I bought was written by Dave (Watchmen) Gibbons, and drawn by Andy and Adam Kubert (of the Dover, New Jersey Kuberts). 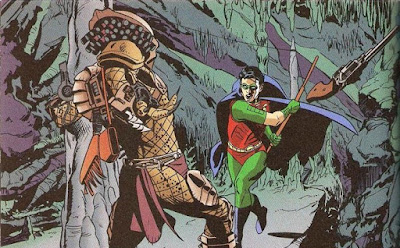 The two sequels extending the interaction with the Bat-clan were written two of the top Batman family writers of the era, Doug Moench and Chuck Dixon.

Besides the Batman battles, a Yautja also met Superman. Micheline and Maleev’s tale brought the Predator to earth along with a space virus that affected Big Blue’s power level, to prevent it from being three panels long.  At least it allowed the fight to take place in the jungle setting of the original film. 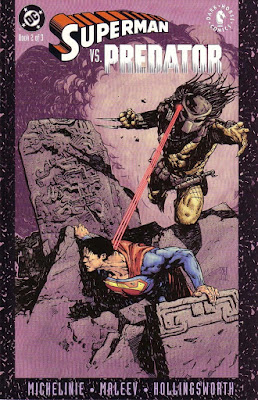 For a power level and gadget match up, Batman works better. There was even an acclaimed short fan film, Dead End!

The “enhanced creator” effect also happened when Dark Horse crossed over licenses within itself.  Walt (best Thor ever) Simonson wrote the feral conflict that brought in two of Burroughs’s mythologies in Tarzan Vs. Predator: At the Earth’s Core. 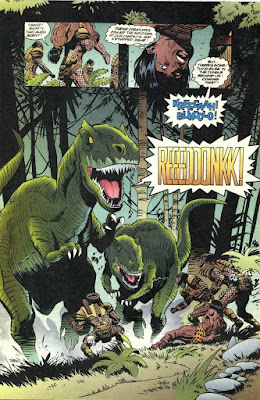 Those trophy takin' space monsters fit in really well in Mega City one and the Cursed Earth as well, spawning epic battles with Judge Dredd.  Actually, the Batman/ Dredd crossovers were awesome as well. We really need one with all three. 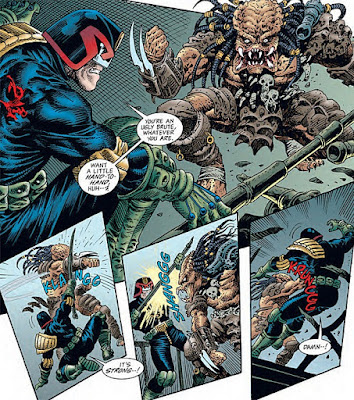 The most bizarre mix was unquestionably 2015’s Archie Vs. Predator.  The storyline, and violence, followed in the footsteps of the critically and commercially successful Archie horror line.  Yet the art was done in classic Archie style by Fernando Ruiz.  It was a fun, yet twisted version of the Yautja, tearing his way through a Riverdale gang who somehow retained their identities and innocence, when not being ripped limb from limb, as they referenced the original film. 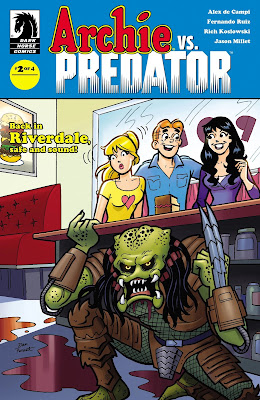 Reggie claiming to be a, “Gosh darn sexual tyrannosaurus.”
And
Veronica, “Ain’t got time to read.”
Or the most classic line, shouting out another classic eviscerated by TV censors:
“You are one ugly melon farmer!”

Batman, Superman, and Judge Dredd also met the Xenomorphs (separately, sadly) with similar artistic success, and they all also met them with the Predators (Bruce and Clark together this time), but that specific type cross over is where the Yautja shined the most, and will be covered next week.