At work, we had many lengthy meetings trying to find a failure mode root cause by using a Fishbone Diagram (sorting reasons into Man, Machine, Method or Mother Nature).  At home, I was reading a lot of Dr. Seuss to my daughter.  We also had a great deal of snow to clear off the driveway. This is typical response my brain has to large amounts of stress, rhyming and unpleasant labor.

Fishbone of my Heart
Lyrics by Jeff McGinley 3-16-2008
The kind of song Dion and the Belmonts would have sung…
If Dion was an engineer…
And at least partially insane. 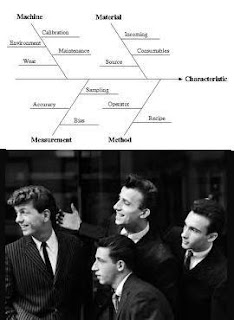 Email ThisBlogThis!Share to TwitterShare to FacebookShare to Pinterest
Labels: songs

A twit by any other name...

There should be a gadget to make this notification, but apparently it is broken. Just how a virtual gadget can
"break" is beyond my limited webby knowledge.

So here's a link for ya. 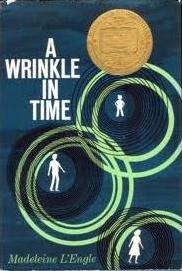 When I first pulled A Wrinkle in Time off the Riverview Elementary School classroom  shelf, little did I know that I was about to stumble into the first book that would expand my mind, giving me a headache in a good way.  There are a fair amount of other books that can do this for the same age group, but this was the one I actually found at that age. One reason it was important is it provided a topic of conversation while a favorite cousin and I avoided all the sport related activities at family gatherings. Equally as important, however, was that it provided an introduction to a few themes that have stayed with me throughout my life.
One of the big themes is that it stresses a balance between science and faith.  Most narratives heavily side with one, casting the other as the enemy. This balance holds true for the first three books in the series, although the faith side takes over a little too strongly for my tastes in Madeleine L’Engle’s tales of the family after them. (Horrible heretical heathen that I am.)
Read more »
Posted by Jeff McGinley at 2:00 PM 5 comments:

A Carnivore’s Guide to Cardiology: Up the Lake Swimming Journal

I got back into swimming the first summer Up the Lake after the stent (2010).  The lake is about a ninth of a mile wide, so after several weekends of getting my wind back, I tried to do five times a day (making it a little over a mile).  Usually I did it in sets of two laps or on a good day three.  There were a couple of times where I made six trips. On those days I earned a bonus cookie or brownie or something in addition to my weekly desert.  I probably could have done more, but just going up on weekends: Fridays we get there, Saturday night is church, and Sunday we leave.  Therefore, besides not swimming during the week, there was a time crunch. (Plus I like to actually spend some time playing with my daughter in the water.)  What follows is the end of summer weekend day by day record of how this innocent exercise blossomed into a full blown obsession.
Read more »
Posted by Jeff McGinley at 2:00 PM 4 comments:

Email ThisBlogThis!Share to TwitterShare to FacebookShare to Pinterest
Labels: A Carnivore’s Guide to Cardiology, Up the Lake

To say I was excited when TRON: Legacy was announced would be a gross understatement.  In 1982, a film about a computer superhero made by Disney hit almost every chord possible for my family and me.  When I first saw information about the sequel, I was perhaps overly ready.

I marked the release date on my calendar, in case I wanted to take a half day to go see it, and I dug the original out to watch it in preparation.  I then learned the problem of being too connected to geek culture as the time drew closer, with no increase in advertisement.  I found out that I had the right release day, but was off by a year.
Read more »
Posted by Jeff McGinley at 2:00 PM 2 comments:

Up the Lake: B B Guns

Amazing Air-Rifle Antics
Or
Boys, B-B's, and, um, Something Else That Starts With "B"

Even as alleged adults, my sister and I often resurrected one of our most common, fun filled (translation: exceedingly dangerous) childhood activities.  It usually started innocently enough (by Up the Lake standards) when, for example, we were trying to figure out the most entertaining way of suspending a doll into the fireplace. (See, perfectly innocent.)  This inevitably led me to the dollar store to get some more test subjects.  While there, I purchased some army men, which I figured we could also creatively immolate.  We've all learned that it is very hard to stop burning toys once you start.  A mentality of, "That burned well, we should burn it more often," grows very rapidly, until what started as getting rid of one old broken toy becomes an experiment filled house cleaning of epic proportions.  However, before placing the little injection molded soldiers into their funeral pyre, we decided to try to shoot them, because it is far less fun the other way around.  We stood them up in a little group on a dirt hill, and took pot shots at the doomed diorama with my old Daisy .177 caliber BB and pellet gun.
Read more »
Posted by Jeff McGinley at 2:00 PM 2 comments:

Why Little Jeff is Sad when DC and Marvel Fight

Comic Should Be Good just finished their Superhero March Madness, where comic fans voted on which characters would win a fight. The rules were: the characters know which fight is coming, have a half hour to get ready, and have to use their normal resources.  Reading through the posts after each voting and results round made me sad.  Not sad because my favorite fictional characters lost matches based on the outcome of random internet fan voted results concerning pretend contests between imaginary people with impossible powers, mind you. Incensed, and filled with nerd rage maybe, but not sad. (And not nearly as upset as my mother, it's apparently genetic.)  What made me sad was how many different comments in the voting threads said, “I can’t imagine character A EVER beating character B.”

In fictional worlds where huge personal tragedy and huge doses of radiation produce not a major need for counseling and a major case of death, but people with powers, abilities, and drive far beyond the norms, who choose to wear funny pajamas and fight crime: you can’t imagine something.

In a story setting, where what any sane person would call “surpassing insurmountable odds” is called “Wednesday”: you CAN’T imagine something.

In a medium where Doctor Doom has fallen to Squirrel Girl and Robin II defeated Mongul (in the arctic, wearing a polo shirt and a green scaly version of “tighty whiteys”; the same costume Robin I survived forty four North Eastern winters in): YOU CAN’T IMAGINE SOMETHING?

I weep for some of my fellow fans.  After all the comics I’ve read, I could readily imagine Galactus being trounced by Perry the Platypus. 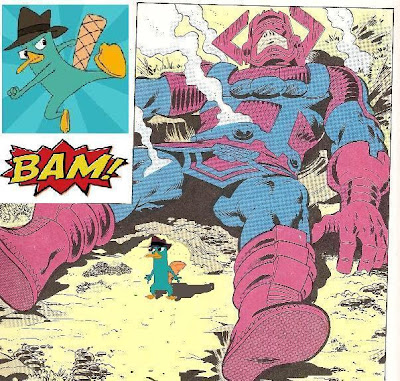 A Star Wars Trilogy of oldies parodies.  Highlighting my skill at bad rhyming, and my lack of skill at image manipulation. 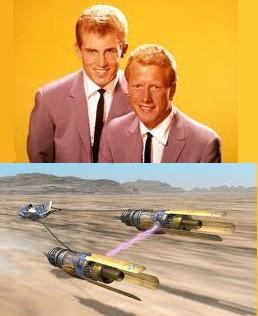 THE LITTLE YOUNG JEDI FROM TATOOINE-AH
(to the tune of The Little Old Lady (From Pasadena))
Lyrics By Jeff McGinley 6-10-99
Music by and apologies to Jan and Dean
Read more »
Posted by Jeff McGinley at 2:00 PM No comments:

LORDS OF LIGHT! It's the Greatest Cartoon Ever

It’s always nice to return to a series fondly remembered from youth and have it live up to the memory.  (Heck, after seeing reruns of Automan, sometimes it’s nice just seeing ones that don’t induce nausea.) There are surprises seeing what holds up and what doesn’t.  The original Transformers cartoon is still a great deal of fun, while the similarly produced G I Joe faired far worse.  I credit the ability of robots to blow the bearings out of each other without getting stopped by TV censors. Luckily the old Marvel G I Joe comic series is being reprinted so I can read quality stories with the cartoon voices in my head…as opposed to all the other voices in my head, which may explain my focus on old cartoons. The old cartoon that both my regular voice and the voices in my head quote more than any other is Thundarr the Barbarian. 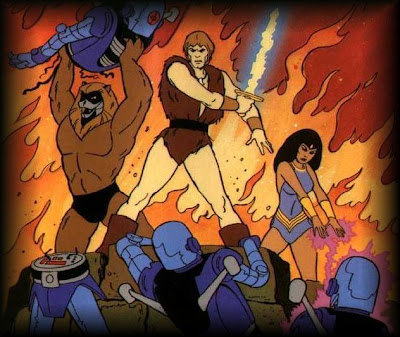 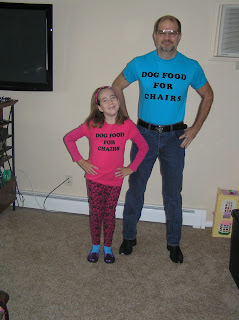 Since well before I used the name on this blog I've gotten a semi constant stream of questions on the phrase used in the title.  The questions break down into either, "What does it mean?' or "Where does it come from?"  The answers to both questions are, surprisingly, very different. While in the past, I've made up phony answers to both to entertain myself, today I have decided to post the true story here to clear up any confusion.