The Nearly Empty Magic Kingdom, (And the Equally Empty List of Anabelle’s Food)

Following the Pluto Incident, we were concerned about Tuesday’s breakfast with Pooh and friends in the Crystal Palace before park opening.  We were expecting yet another disaster from waking Anabelle up extra early to encounter the Lurking Horror of Eeyore.
Read more »
Posted by Jeff McGinley at 2:00 PM No comments:

The Magic Almost Ends as it Starts in Epcot (Saved by a Journal and Crayons)
After entering Epcot on her fifth birthday, Anabelle informed us she had decided she didn’t want to go on any rides at all, only see characters. We were near the character stop, which should have been a good place to start given that revelation, and then ease her into other areas once she was “happy”.  She excitedly waved at everyone through the window as we went inside.

The Land of a Million Dreams (And a Few Nightmares)

Luckily, Anabelle didn’t notice the tornado of confusion and activity during the days before we left, so she was suitably confused when I returned from the driveway with both the Sunday newspaper AND Grandma.  We told her there was one birthday present that Grandpa really wanted her to have, and gave her a folded piece of paper.  On it was: a picture of Cinderella’s castle and the phrase,  “We’re all going to Disney World!! Surprise!!!! Happy 5th Birthday”

Click here for other Disney Adventures (below the 2013 Index)

I have a lot of them, but more importantly, while I have been known to obsess about it regularly, I haven’t mentioned Tron in far too long.

There is a vampire film that is a textbook example of how to do a movie remake. 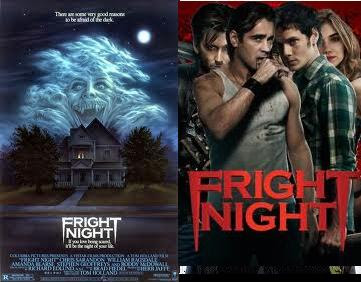 Technically, I should have written this when the film came out, but I missed the theatrical release due to exhaustion and being behind on something I was writing last August. (In other words, to keep an entry from being a week late, this post is almost a year late.  Time Management has never been my forte.)

Favorite Spoiler Moments from The Avengers

I held it together and wrote a review of the new Avengers movie without specifically referring to any spoilers that couldn’t be figured out from the trailers.

However, doing that has made me darn near ready to explode into an uncontrolled, nerdly rave filled, “HOLY GUACAMOLE, DID YOU SEE THE PART WHEN…” without being able to stop myself for weeks on end because the film was simply way too much fun.

Therefore, in no particular order, here are ten moments I wouldn’t have wanted given away before I saw it, but I really need to geek out over before I burst.

DON’T READ FURTHER IF YOU DON’T WANT TO RUIN SURPRISES IN THE AVENGERS 2012 MOVIE!!!  GRAB THE KIDS, GO SEE IT, HAVE A BLAST AND THEN COME BACK!
Read more »
Posted by Jeff McGinley at 2:00 PM 3 comments:

"And there came a day, a day unlike any other…

When Jeff saw a superhero movie and wouldn’t shut up about it for days.”

OK, that day is pretty much exactly like any other, but that’s not the point.

The point is - we got an Avengers film.

More importantly, we got THIS Avengers film:  the superhero movie I’ve been waiting my whole life to see.

The first comic books I bought with an eye on continued collection were from the Avengers’ family.  I followed Thor, Iron Man and the West Coast Avengers all through high school and into college.  (Stopping shortly before the whole Crossing mess made Marvel, amazingly, even worse than it already had gotten in the nineties.)
﻿

How I Learned to Pay Attention More

MIAMI!﻿
Back during my single days I went to Miami for my Great Aunt and Uncle's fiftieth wedding anniversary.  As they had frequently come north for family events in our area, a horde of Bronx born Italians and our kin descended on southern Florida.
Read more »
Posted by Jeff McGinley at 2:00 PM 7 comments: