There’s a new Predator film out.

See down below for a spoiler free review. 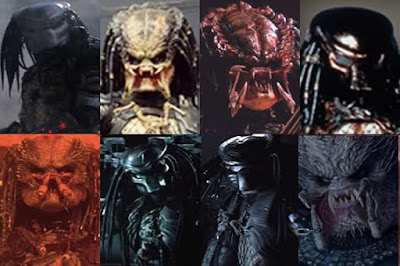 More importantly, this serves as an introduction to a long delayed tour of the whole franchise.

For Fox’s science fiction monsters, the Predator has always been the unfavored child.

The Yautja (named in expanded materials outside the films) are far less popular, profitable and prolific than their Xenomorph “cousins” from the Alien franchise.

I prefer the Predators though.  To use a comic book analogy (because it’s me) Aliens are more like the original appearance of Doomsday: a specific set of scary powers and abilities without real depth, to be used an obstacle to the hero.

Predators are more like Bane. Yes he’s designed to fight the hero, but he was fleshed out as a  character first (based on Doc Savage) and has had evolutions as new creative teams guided his destiny.

Aliens are, by design, faceless scary monsters; Predators have personality, and a cool and interesting tool box of lethal accessories to play with!

One thing I truly appreciate about Predator cinema stories is, even though the release dates are few and far between, the filmmakers have always gone out of their way to make sure the Yautja are presented as being part of the same World each time.  New items and revelations grow out of what has come before. 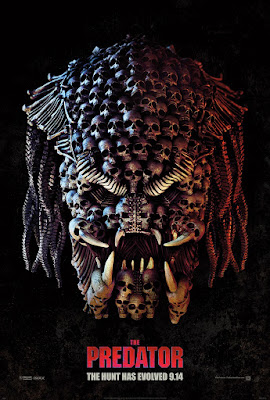 This year's film reteams the guys who brought the world The Monster Squad. (YAY!) Fred Dekker also worked in another franchise I like more than its more popular associate, when he wrote and directed Robocop 3.  While Shane Black is known to Yautja enthusiasts as Hawkins in (and a silent script doctor on) the first Predator.

It’s not only the names of the bullies in this movie that reveal the Monster Squad past of its creators.  Like that film, there is a mix of real horror monster action with dark humor spaced throughout.

Anyone who says the original Predator didn’t have a lot of humor must have missed all the subtle (and much of the no subtle) parts of it. There will be more of those thoughts in that film’s post, but it isn't a coincidence that John McTiernan went on to direct Last Action Hero.

Predators remain formidable and terrifying foes, and their lethality is showcased by a combination of high end computer graphics, and the practical effect focused world of Tom Woodruff Jr., Alec Gillis and the rest of the gang at Amalgamated Dynamics.  They've nicely transitioned from being "the Alien guys" to "the Predator guys."  It doesn't hurt that they're another link to Monster Squad.

The film delivers a fitting representation of  the Predator franchise.

There’s an equal amount of both levels of references.  Many lines, moments and characters are call backs, usually with an entertaining twist (and occasionally poking fun at some of the more ridiculous ideas), of the previous installments.  The in  story continuity references to past events and logical progressions from them are equally present.

“Logical progressions” may be too strong a description for stories about invisible beweaponed big game hunters from space.  Work with me, people.

Audio references, a strong suit of the franchise, continue to be used.  Musical cues, and more importantly organic and technological sound effects create links through the series making the current installment sound correct.

The cast also matches the gangs seen in previous outings. They’re an excessively over the top group of unique in their own style and competency combatants, which are entertaining to follow through their battles with the creatures and other opponents.  There’s also a sufficient amount of “Cannon Fodder” unpleasant personnel, and authority figures who foolishly underestimate the threat around to keep the carnage levels high.

That last item is important.  The original movie could hang its plasma caster on suspense for much of of the time, with the multi stage reveal of the Predator yielding several payoffs.  Now we all know what a Predator is, what it looks like, and what it can do…and we want to see it in action as much as possible.

This film lays out a decent mix of previously seen weapons and tactics, with new items, ideas and Yautja society reveals.  Thanks to improved effects technology (and probably the success of Deadpool) we get more visuals of the results of those Yautja weapons and tactics. Woo hoo!

It's a giant pile of bombastic and gore filled mayhem, chock full of goofy yet highly deadly human opponents, with commanding leaders demonstrating that it's not just our weapons, but the the human mind that makes us their most dangerous (soft) prey.  There are enough science fiction elements to elevate it above a standard “deadly monster” film, and it both showcases what we’ve seen before, while enhancing and adding to the overall Yautja mythology.

In other words: it's a Predator film!
My daughter and I cheered the whole way through. (That’s my girl! I'm so proud.)

Anyone else who’s followed an enjoyed the franchise as its bumped along shifting from creator to creator over the years will likely do the same.