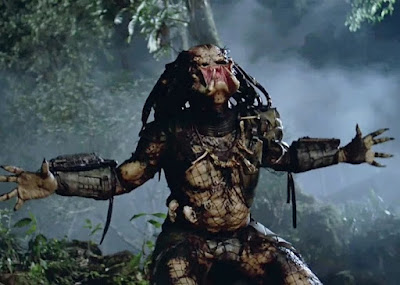 The original Predator is showered with praise by fans of that sort of thing.

And I think one of the big reasons that the sequels failed to live up to the expectations of the first for many that are not me, is that folks are a bit confused about what “that sort of thing” is.

The reason the original succeeded came from it teasing out the reveal of the Predator over the first half of the film.  The movie starts out as an over the top Eighties military action flick.  If you ignore the brief space ship scene at the opening, no hard evidence of alien intervention shows up for about twenty five minutes.

The reveals get grander and grander until the film changes genre to a horror movie half way through.  It’s also not just any horror movie, it's an Eighties slasher film with the Special Forces gang taking the place of cheerleaders or sorority victims.

The genre shift was HUGE and inspired subsequent film makers. (Tarantino used the idea in From Dusk Till Dawn.)

That’s the first problem the sequels have to face. Similar to many innovative creature films, you can only have an awesome reveal once.  Now that the Yautja is out of the bag, we all know what the amazing Stan Winston designed being looks like and what it can do. (Voiced by Peter “Optimus Prime” Cullen!!! I did not know that!!)

The other problem future outings face is comparisons to what surely was the most macho and testosterone filled manliness fest in cinema history. 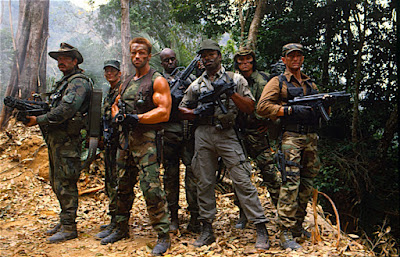 That’s not really what the original Predator was, though. This is why I chuckle whenever viewers complain there is too much humor in other Predator films.

The original Predator was much more of a SATIRE of macho and testosterone filled manliness fests. The problem, much like with Spinal Tap and the real world of heavy metal, is the source material is so patently ridiculous that it’s hard to tell the satire from the real thing.

John McTiernan admits that whenever the studio asked for scenes with a bunch of gunfire, he’d make sure (like in both Die Hard – shooting the elevator and Predator – defoliating the forest) that it was completely ineffective.

This is the man who made The Last Action Hero; satire of action films is what he does.

Yes, there is a near constant stream of macho-isms, but almost every single one is cut down to size shortly thereafter.

Jesse Ventura even titled his autobiography, Ain’t Got Time to Bleed.  But Poncho completely deflates Blain’s line with, “You got time to duck?” right afterwards.

Come to think of it, there isn’t a single line Ventura speaks that isn’t so patently over the top that it comes out just as goofy as it is awesome.

Side note: If anyone told me when I first saw it this film would have three different stars with gubernatorial campaigns, two of which were successful, I’d have told them they were nuts.

These card carrying members of the ridiculously manly squad are rapidly transitioned into panicked school children in the latter half of the film.

Yes, Poncho’s “I can make it” after being smacked silly by one of his buddies log traps in another display of the how wildly ineffective the Special Forces are against a Predator was inspirational.
That is, until he didn’t “make it” shortly thereafter.

Billy’s super testosterone fueled “last stand” on the natural bridge looked like it was going to be legendary when he draws his massive, in no way symbolic, knife and marks himself.

His battle against the Predator was so short all that appears on screen is Billy’s voice screaming like a “leetle gurl.”*

The point where it is the most serious veers the furthest away from traditional manly moments. It’s Mac’s reflection on the past over the body of Blain.  It's a heartfelt tear jerker moment about the bonds formed through hardship and emotionally dealing with loss.  More Hallmark than Dirty Harry.

Even the manliest of the manly men, Arnold Schwarzenegger himself as Dutch, finds all his technological terror type weapons are worthless against the beast. While he does take it out (but using primitive means and intellect), he also gets the ever loving snot beaten out of him before being laughed at and blowed up.

Predator was a fantastic, genre switching action film that introduced the world to yet another awesome and terrifying Stan Winston creature from another world.

But let’s not for a moment pretend it was serious.

End admission:  My picking on this film by no means diminishes my belief that a prequel showing Dutch and his squad in their prime going on standard Special Forces rescue missions would have out awesomed every other film made in that decade, and several before and after.

*Footnote - This is in no way meaning to cast aspersions on girls, little or otherwise. It’s merely a quote of my friend’s wife describing our reaction when she poked her head through the curtain of the Jurassic Park shooter we were playing in the Disneyland Arcade.  I probably didn’t need to clarify this, but since we both also pointed the light guns at her while engaging in high pitched screaming, it’s funny and I wanted it written down somewhere.

Many and manly thanx!