Universal Monsters Through a Kid’s Eyes 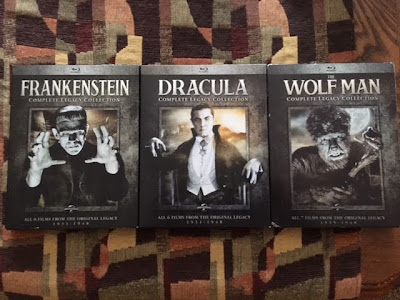 I should probably take Grandma’s advice and change this to “My Kid’s Eyes” as she gets older, but there’s no way I'm going back and relabeling all the old posts, I’m behind as it is.

Speaking of being behind, with the release of the legacy  edition monster films on Blu-Ray marked down for Halloween sales two years in a row, I can overcome one of my child’s biases against “stinky, grainy old tapes” in my multiyear quest to get my young horror fan to watch the classics.

Hey, she says Van Helsing is her favorite scary movie, why wouldn’t she be interested in its source material?

The answer, of course, is her natural bias against black and white.  Now, in-spite of my currently owning far too many copies of digitally enhanced Abbot and Costello Meet Frankenstein, we haven’t made much headway.

I’m woefully behind on material, but since this year is the 200th Anniversary of the publication of Mary Shelley’s book Frankenstein the Modern Prometheus I'm going with what I have for now, maybe now that she’s read Dracula and  Frankenstein someday we’ll watch more of them.
Later edit: Nope!  Her resistance to black and white continued, then she went to college. Rosa and I watched them all together though. My vast warehouse of useless monster knowledge coupled with her never having seen these before led to fun commentary anyway.