Here is a reminder of what this week is“10 DAY MOVIE CHALLENGE.”
Following the same guidelines as the animated films, after the original list of course:

The rules are: you have to post an image of a NONHUMAN NONBLOCKBUSTER movie character that affected you in some way. Even if it was in the background or had only 5 seconds of screen time. Doesn't matter. ***NO JAWS, STAR WARS, ALIEN, THING, ETC. IT'S A CHALLENGE***

I really wanted to include Ice Pirates (1984) somewhere in this mess of lists. I watched it a bunch as a teen, and it has space herpes in it for God’s sake. 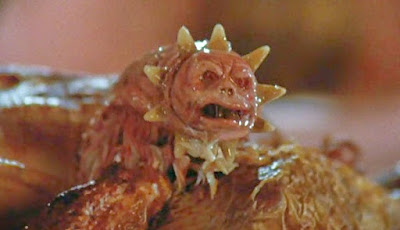 But I can’t really remember it at all outside of the disco robots, Bruce Villanch’s disembodied head, and the time speeded up ending. Guess I need to seek out the blu ray.  This process is expensive, making my head accelerate from, "I haven't thought about that movie in years," to, "Amazon, click click click."

We work the "I want the sword" "I want the axe" thing into daily conversations too often, but I'm pretty sure these guys still counted as human in 1987...barely. 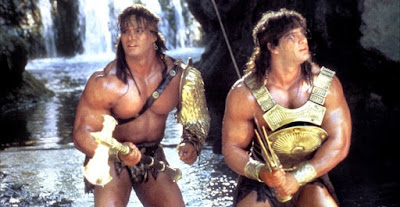 Anyway...on to this week’s images/ clues.  Answers will be added to the post or as a comment next week. 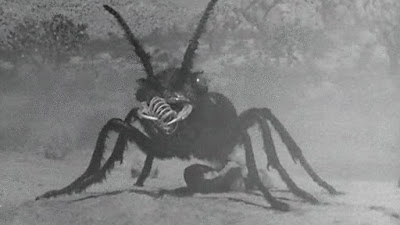 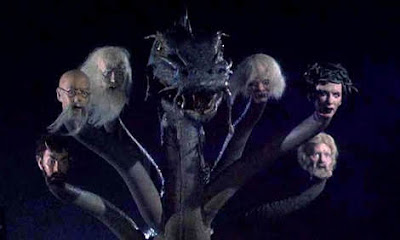 The quote, “When you look at it the right way, the whole world is a circus,” hangs in my office.  Tony Randall and Barbara Eden being more awesome than we already knew they were from sit-coms.

The creepy little bastard from this anthology film tormented my dreams.  Thank you Stephen King for more nightmares. 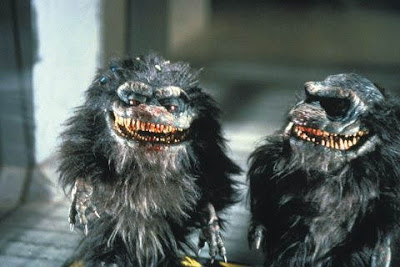 Not a Gremlins rip off. This was in production at the same time, and was much more science fiction than fantasy.  Can’t believe I forgot the alien bounty hunters were named Ug and Lee.  I also can't believe how long it took me seeing these films and thinking, "Where have I seen Terrence Mann?" and looking at my CDs of Broadway shows thinking, "Where have I seen Terrence Mann?" before realizing how many legendary original casts Ug was a member of.

More Stephen King, I was tempted to go with the electric knife or the soda machine, but this was too cool looking.  All you young 'uns who thought it was cool that the Iron Man soundtrack used AC/DC...King did it first, and better. 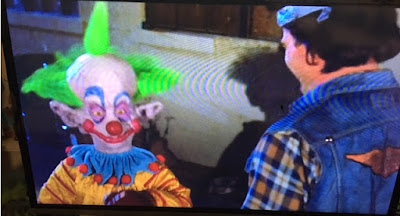 They keep promising a sequel for this one with the same cast and crew.  Living balloon animals, deadly popcorn spawn, a catchy theme song and a literal knock your block off joke…what more could you want in a film? 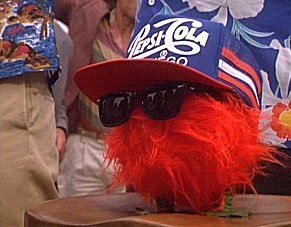 It says a lot about my messed up noggin that I felt the 1978 original was far too mainstream for this list.  John Astin is awesome as always playing the scientist who creates this creature in one of George Clooney’s earliest movies. 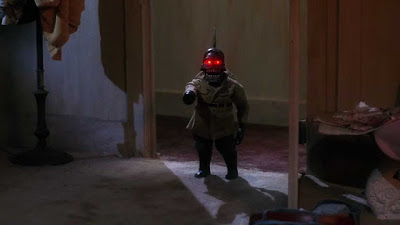 Part one was fun too, and had worthy characters for this list. But this guy here in the sequel is where the franchise really opened the crazy throttle and ran with it. 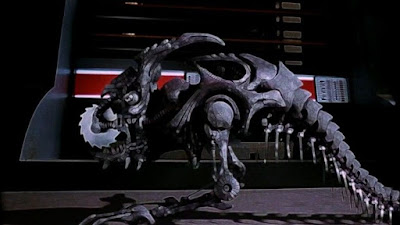 Another Science Fiction short story made into a movie of futuristic fear. Peter Weller, a near empty space colony, and some freaky kids round it out.

More cool and weird French science fiction.  She's part of a beautifully edited scene of intrigue, emotion and action.  This film is close to qualifying for the original rules.  The impact wasn't obvious when I saw this in the theater with my family, but the more we watched it the more it grew on us.  I've since inherited my Dad's favorite and often quoted line, "Listen lady, I only speak two languages...English and bad English."

Hey, looking at all these lists, I could probably do a top ten of just plants! Gotta get working on that! 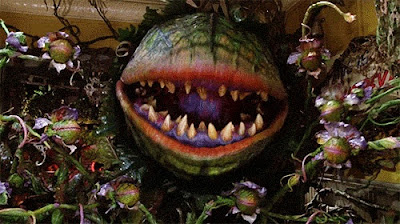 And Frank Oz directed it…

Oh crud!
I forgot the “fancy” Henson films. They’d be perfect for this challenge.

I'd favorably compare the World Building of Dark Crystal (1982) to any modern film franchise. Creating a culture is one thing, but creating an ecology is something special. Years later Scott and I would deliver excellent dueling Fizgig impressions.

I don't remember the first time I saw Labyrinth (1986).  I do remember watching it at Jesse's Drama Club's party when visiting Massachusetts.  The girls all argued about who "got to be" David Bowie, and yelled at Jesse when he started contact juggling.  The entire group, who had known me for a grand total of twenty minutes, turned to me as one and declared with no argument allowed, "You're Ludo!"

Seriously, I could do a top ten for each film genre, easy!

No, no, let me go… I have so many movies to talk about.

I've got to be close to the ninetieth movie reference for this "Top Ten" exercise... 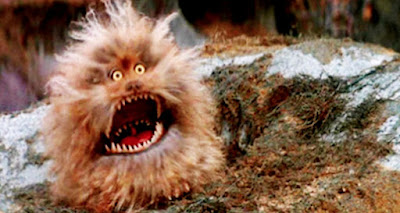 Oh well, I guess this is time for my exit… 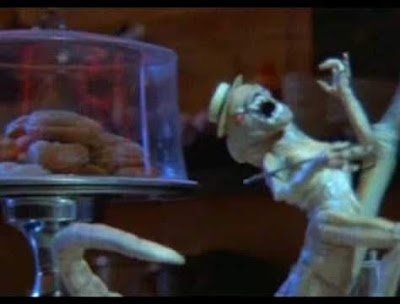 ICE PIRATES!!! That one wandered out of the memory bank. KK sequel? CGI could kill it but who knows.

I know, right? I don't even know what triggered the memory of it. Thinking about stuff we got from the old Denville video store I guess.

Its the Chiodo brothers talking about it, and they're pretty entrenched in practical effects. A bigger hurdle is going to be financing the thing. I don't think they can sell it on "Chris, Jeff and Jeff in NJ will go see it."

Thanx for reading, and posting.

The old Denville video store. I'd forgotten about that. Is n't that the place with the "King Kong Lives with the Three Amigos" incident?

How could you forget about the source of most of the movies we quote.

Yes, that was the oft mentioned home of the "King Kong Lives with the Three Amigos" incident.

Someday I will write that film.