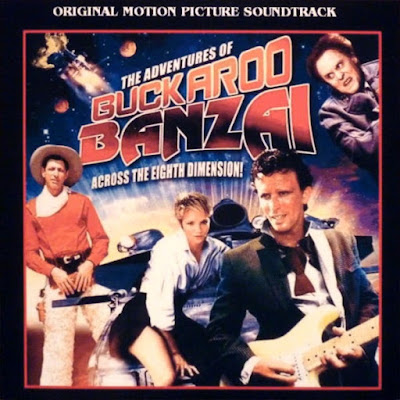 The Barbarians 1987 Kutchek and Gore

The guys who initiated this whole thing started asking around for new challenges.  I tried to think of one to go along to the ones passed on to me.  However, I realized they were posting films featuring “What the hell was that scene” scenes, like I was, but that even I had forgotten or never heard of.

Instead I decided to shift in a whole different direction to showcase a different part of my warped brain.

The challenge I’ve made for myself to allow a continuation of talking about family favorite films (which, lets face it, I would probably do anyway) relates to soundtracks.

A significant percentage of my record/tape/CD/magical non corporeal music files collection has always been soundtracks.  I’m not sure if it means I’m visually based, since the music I listen to is related to specific images.  It may also mean I am auditory based, since I connect so strongly with what is heard in the movies.

Evaluation tests of visual / auditory dominance usually put me square in the middle. It’s kind of like when I take the test to see if I’m right or left brain dominant, and the results show my focus is in the empty space between brain hemispheres.

What was I saying?

Because I enjoy recreating the film experience, I get crabby about my soundtracks.  After years of hunting I finally got the Buckaroo Banzai soundtrack, thanks to my sister finding it on a weird website.  (YAY!)
It meets most of my criteria:
It mixes score and individual songs.
It contains quotes from the film.
It’s not missing any key or title songs.

There’s one area it fails at, though, which is the most common one.
It’s not in movie order.
I don't understand why that is even an option but most soundtracks don't match the music order of the film.

Luckily, here in the future, the internet and playlists let me rectify that. 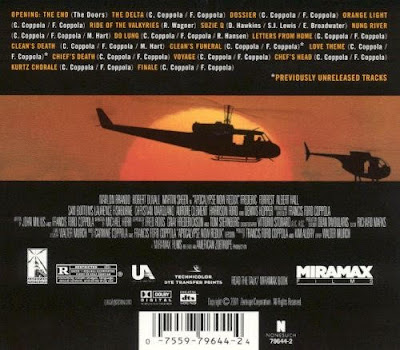 For reference, the Apocalypse Now two disc soundtrack is the best one I've ever seen at meeting all categories. Before I got a good copy of the film, I often put on headphones in a dark room and relived the story in my head...which is what soundtracks are supposed to do according to me.  There's something disturbingly soothing about Martin Sheen's haunted narration.  (Thank you to Brian for the recommendation on that one.) 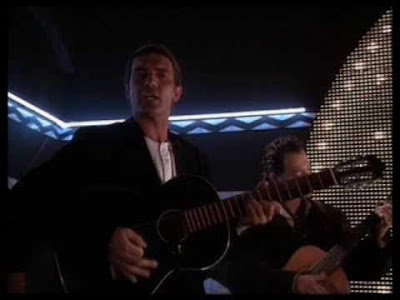 Movies by Robert Rodriguez and John Carpenter also usually meet most of the criteria.
Probably not coincidentally, both are musicians. 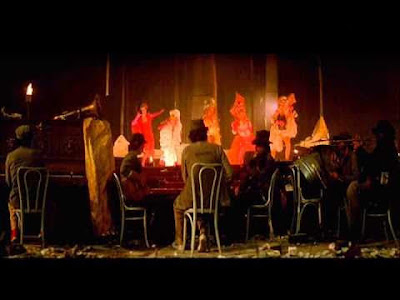 Anyway, on to the challenge.

I definitely enjoy a good musical, but what I think I enjoy more is when a full-fledged, completely realized, over the top musical number shows up in a non-musical film for no reason whatsoever.  It satisfies both my warped sense of humor, and my audio/ video connection thing.

As always, I need to clarify a few points before getting to the list.

I’m not talking about a well-executed background song on the soundtrack used to score a scene here.

Zeppelin’s “The Immigrant Song” in Thor: Ragnarok (2017) was outstandingly epic both moments it kicked in. 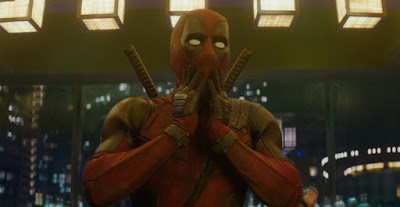 Dolly Parton’s “Nine to Five” was…lets go with a different sort of epic… in 2018’s Deadpool 2.

However in both cases, this was background music that the audience heard, that wasn’t taking place in universe, and that the characters were not performing.

Man, singing superheroes, now THAT would have been uber epic!

Small Soldiers (1998) had an outstanding Poledouris score and excellently used songs throughout.  Then they screwed up the soundtrack album by having all master mix versions. 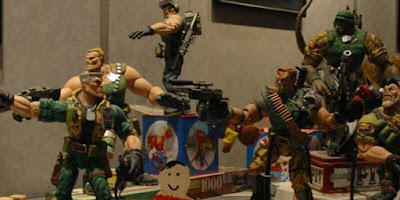 There are a huge number of films that would be a perfect example of these same issues.  (Like Suicide Squad) However, I should have gotten to this movie long before now in this exercise.  Joe Dante directed, Stan Winston designed, living, battling toys where Spinal Tap meets the Dirty Dozen meets Buffy and Wednesday.  Apologies for waiting so long.

Back to the rules:

Performances taking place on stages or dance parties in story also do not count.  This disqualified both movies the Carpenter and Rodriguez images above were taken from plus: 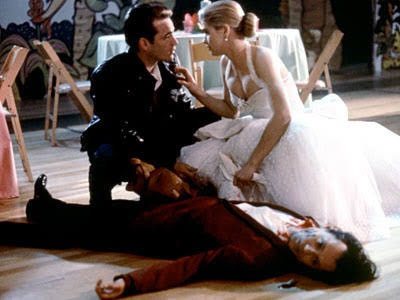 The vampire prom scene in the 1992 original Buffy the Vampire Slayer, 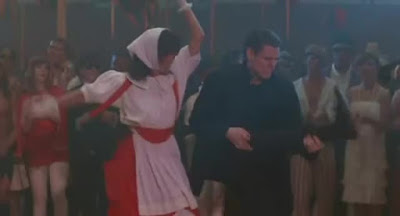 Jim Carrey participating in the awesome dance off between Lauren Hutton and Karen Kopkins in 1985's Once Bitten, 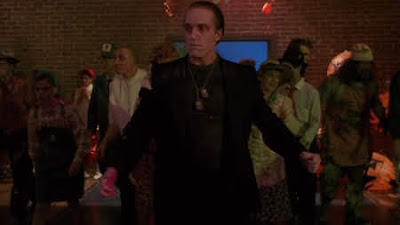 Similar to the “stage act” rule, and on the opposite end of the spectrum from well executed soundtrack songs is characters performing parts of the regular score.

Any chance I get I will rave about the world building of The Dark Crystal. (1982) The chanting Uru, the celebrating Podlings and the Gelfing boat duet were all incredibly beautiful and otherworldly musical moments that added to the immersion in Thra. 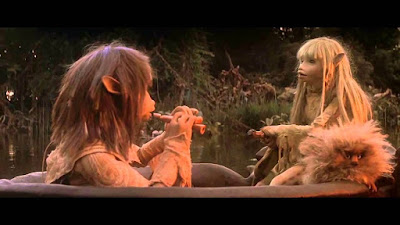 However that’s how the music functions, as internal portions of the score.  They’re gorgeous, but they fit in too well, and lack the “completely out of nowhere” element I’m looking for.

The Star Wars franchise juuuuuuuuuust misses the list for the same reason. Most of the “out there” musical moments in Star Wars, such as the cantina band, or Sy Snootles performance in Jabba’s palace, are on a stage. The exception is the end of Return of the Jedi.  (The original, 1983, (a.k.a. the good) version) 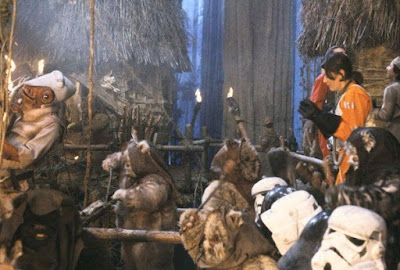 The Ewok celebration (affectionately called “Lug Nuts” by some of us) where they played music on the corpses of their slain foes probably is goofy and out of nowhere enough to barely make it onto the list.  The fact that, despite the awesome catchiness, it does fade directly into the end credits music disqualifies it. 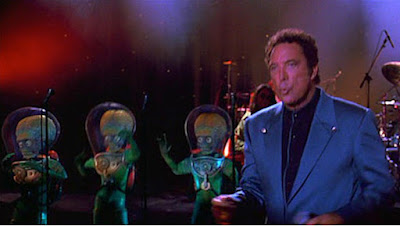 Mars Attacks from 1996 has the same issue.  The first appearance of Tom Jones singing “It’s Not Unusual” is on stage.  And the reprise on the island with dancing wildlife, while staggeringly odd, also fades into the end credits.

An absolutely perfect example would be “Tomato Stomp” from 1978’s Attack of the Killer Tomatoes. In the middle of planning how to stop the enemy, the army suddenly breaks into an Elvis type song for no discernible reason. 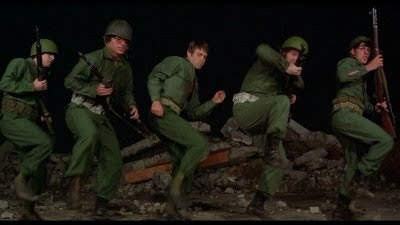 Yes, it could have been perfect, until I remembered the romantic ballad between Mason and Lois at the end…

And "The Mindmaker Song," the advertising man’s insane patter number… 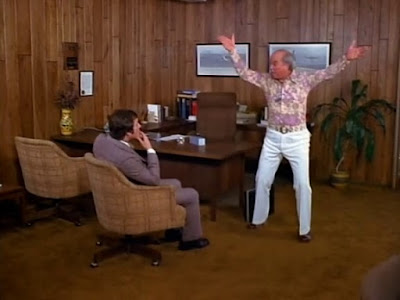 Yes, Attack of the Killer Tomatoes IS a musical.
An awful musical, but still, a musical. 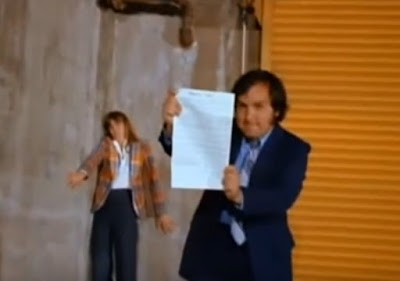 A better perfect example would be Jack Jones showing up in the spotlight searching for Ted Stryker as he escapes the Ronald Regan Hospital for the Mentally Ill in Airplane 2: The Sequel and belting out the Love Boat theme to full orchestral accompaniment. 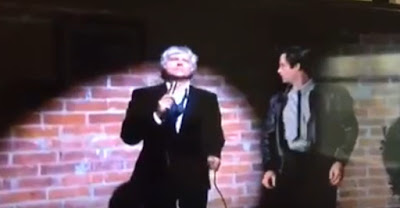 Or it would be if he finished the song.

Come back next week for real examples in the actual list, or more accurately, another lame excuse to remember some movies I’d like to talk about more, or forgot on other lists.

Thanx for the comment, but probably not a "whoa."

More like I thought of a bunch of extra non human things where music was involved and needed and excuse to keep talking about movies.