The Creature Walks Among Us Through a "Kid's" Eyes 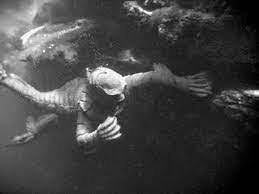 We finished watching the Universal Monsters collection (Or at least the large portion of it I own) with the last Gill-man flick on the 66th Anniversary of that movie's release.
Back on "Alien Day," April 26, 2022.
It is possible planning this blog too far ahead messes up any anniversary celebrations.
While Rosa did enjoy all of these films,
(Almost all anyway...
Looking at you She- Wolf of London)
When I suggested starting over again she said:
"NOOOOOOOOOOOOOOOOOOOOOOOOOOO!!!!!!"
Twenty three films and only two stinkers. (Sadly, including this mess.)
Not a bad record at all.
Rosa was up for a follow up viewing of Van Helsing, which Anabelle suggests regularly.
And I think everyone could easily watch the Monster Squad at any given moment.
But now, we have sadly reached both the end of the Gill-man franchise, and the end of the (extended) classic era of Universal Monsters.
Once again, the underwater filming is massively impressive. This is due to Ricou Browning, the man in the suit for the underwater scenes. He deserves the same recognition as any of the other classic monster performers.
In the Aquaman film, the very Gill-man looking leader of the Fishermen Kingdom was named "King Ricou."  Nice tribute! That can't be a coincidence, right?
To bring things in a full circle, Ricou (the real one) is related to Todd Browning, director of the first film on this journey- Dracula.
He's also related to Pat Browning, an excellent fencing opponent and friend for a long time. This has nothing to do with the movie, but I enjoy pointing out she has the coolest family tree I've ever heard of, also including the inventor of the Louisville Slugger among others. 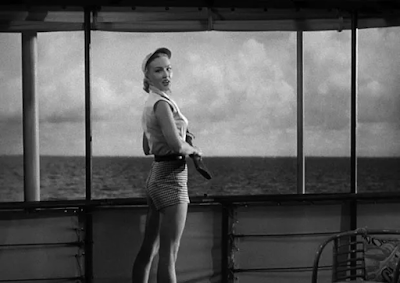 On Marcia randomly firing a rifle off the boat at sharks:
Rosa- "She just shot a fish?"
On mad (and jerky) scientist Doctor Barton explaining he wants to convert the Gill-man to air breathing to help mankind explore beyond Earth:
Rosa- "Outer….
Space…
What." 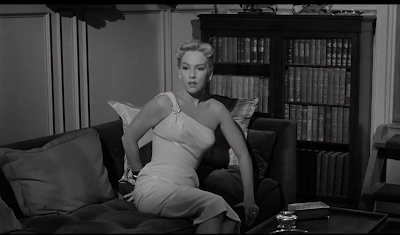 On Marcia in general:
Rosa- "I don’t like her. She’s thinks she’s better than everybody."
On the Gill-man's first appearance:
Movie- "bum Bum BUUUUM!"
Me- "I love that he has his own musical sting."
Rosa- "Did they say it’s the same one from the other movies?"
Me- "Hmmm.
Not specifically.
They should do a sequel like Aliens- CreatureS From the Black Lagoon."

What will they use when he kills someone?"
Me- "Probably 'bum Bum BUUUUM!'"
On the boat's SCUBA diver access point:
Rosa- "There’s steps on the boat.
He’s going to walk in."
On the loud bird screech when they bring the hunt back to the Everglades:
Movie people- "What was that!"
Rosa- "That’s an animal."
Me- "I think they want more specifics."
On the light sources after the Gill-man breaks the spotlight:
Me- "Aren't they in a wooden rowboat?"
Rosa- "Yeah, why?"
Me- "They're filling, and sloshing the fuel around, for gasoline torches."
Rosa- "Ooooh."
*The scientists harpoon and then set the Gill-man on fire."
Rosa- "How is the boat not burning?
That's a trick and a half." 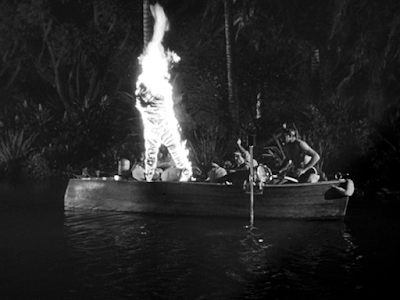 On the water they were just recently using sonar to track the depths of:
*Scientists fall out of the boat and immediately stand up*
Me- "The water is two feet deep?"
On the fully bandaged Gill-man:
Rosa- "Now the Creature is a Mummy too!"
Me- "He did have third degree burns."
On this film in general-
Me- "This one's kinda slow."
Rosa- "This is very slow compared to the other ones.
By this time we’d already have a bunch of dead people."
"The other two were so much better."
On Fifties styles:
Rosa- "Which one is her husband?
Everybody looks The same."
Is it me you’re looking for?"
On the "scientist" in the movie scoffing at not changing the Gill-man:
Scientist- "Nature hasn’t made a new species in four hundred million years!"
Me- "Thats...
Incredibly wrong."
Rosa- "Right? Isn't it?"
Me- "Well the dinosaur extinction was only Sixty-Five million years ago so...yes."
On Marcia and Rhodes Reason:
Rosa- "She's gonna end up with that guy."
Me- "Maybe she’ll end up with the Creature."
Rosa- "Better than her husband." 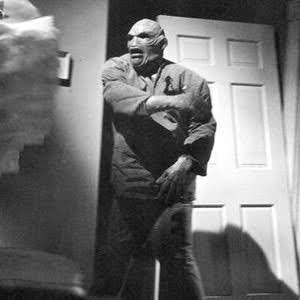 On the converted, land dwelling Gill-man:
Rosa- "He looks a lot less scary."
Me- "He looks sooo tired."
On the Gill-man trying to escape to the water:
Rosa- "He had a little gill left over."
Me- "No."
Rosa *as Gill-man*- *choking noises* "What did you do to me"
*as herself*
"Why are you fighting? He’s trying to help you lunatic.
That's a long time with no oxygen."
Me- "No they're sharing the hose."
Rosa- "Ew...COVID." 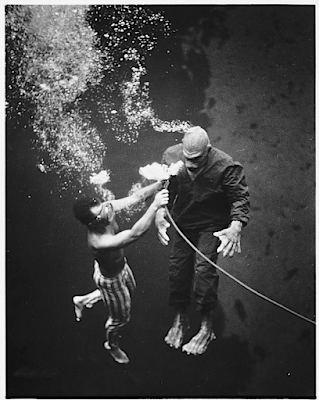 On the Gill-man with the EEG wires in him:
Rosa- "They give him a perm!"
On the Gill-man...in a suit...put in a pen with sheep:
Rosa- "He's going to get scared...
Or eat them."
On the background shot of the Golden Gate Bridge:
Me- They travelled with him to San Francisco all the way from Florida and he didn't kill any of these jerks on the way?!?!"
Rosa- "How sad."
Is he doing yoga?"
On the Gill-man attacking the jerk husband:
Rosa- *covers face*
Me- "Did you just close your eyes for a movie made in 1956?"
Rosa- "Maybe."
Me- "He tossed him off the balcony and they didn't even show the ground."
On there being only seven minutes left when we had to pause:
Rosa- "No...there's no way they can fix everything."
an’t live in either place. What’s he’s going to do?
*He walks toward the ocean and the end title comes up*
Rosa- "Don’t tell me that’s the end."
Me- "Maybe his changing powers let him evolve back to underwater.
In any case, its a crappy way to end the franchise."
Rosa- "It's a crappy movie.
I need to watch one of my mysteries now to cleanse."
Click here for Universal Monsters Index
Posted by Jeff McGinley at 11:00 AM

My favorite line from you was about the music being intense and from Rosa about who is the husband, everyone looks alike.

I'm too lazy and tired to find the exact quotes, Sorry.

I sometimes have a hard time with characters looking so similar. OR if there are too many characters...not realizing an important character even exists.

Thank you.
All this one had that was intense was the music.

Its harder in black and white. But the characters were really cookie cutter and non diverse as well.