It was Savagely Sensational 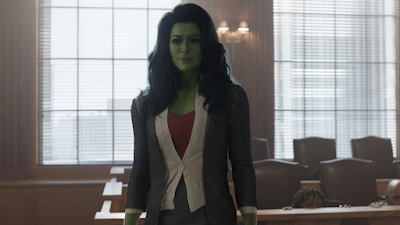 I realize I am way behind on a boatload of reviews.
The upside of this is that means it doesn't matter what order I do them in, or if there are spoilers.
I had a blast watching She Hulk  for many reasons.
The first was that it felt like a normal television comedy series. Most of the other Marvel shows seemed more like segmented movies, or a special, or even an old school mini-series, with a defined over-arching tale to tell.
She Hulk was a sit-com, and significantly better than most sit-coms currently in production. I could tell this because not only did I laugh out loud several times each week, but more importantly I did not give up and stop watching after only a couple of episodes.
It was a nice change of pace that the most important thing in many episodes was not the "Season Arc." In that way it reminded me of older comic books as well.
This may have been the most true to comic sources thing Marvel has done. The fourth wall breaking, the lighter attitude, the mass of cameos from hugely popular characters down to the weirdest minor individuals are all normal in several runs of She Hulk comics. Tatiana Maslany did an outstanding job as both sides of Jen. (Or, more accurately, both views of the same Jen.) 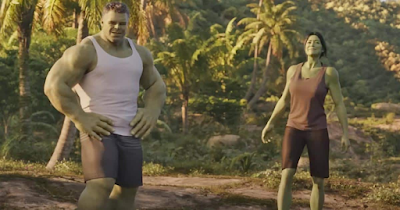 The rest of the cast was great, but a few bear extra mention. First is seeing Mark Ruffalo's Hulk story continue was a nice bonus. Also, he was excellently used to show the difference between his DID infused Hulk, and Jen's mentally together version. 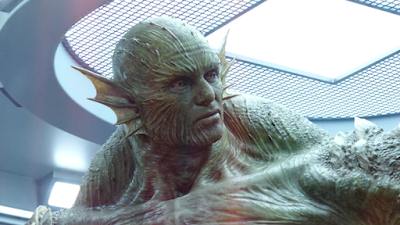 Tim Roth was really interesting before his full transformation in The Incredible Hulk. It was wonderful getting him back, and having him be hilarious. (Half the Avengers are reformed villains in most configurations of that group, Marvel thrives on that stuff.) 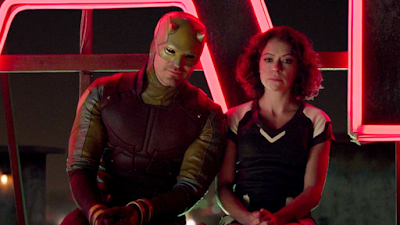 Speaking of abominations...why did they go with the yellow suit?  Anyway. Yes, the Frank Miller dark and gritty Daredevil stories are the character's most famous. But light hearted, smart ass, fun Daredevil has happened many times in the comics. (Mark Waid's was a more more recent version of this, but Stan Lee's take was that attitude as well.) Charlie Cox remained perfect in this interpretation of the role.
My Favorite Year is a film I've always loved and its great seeing Mark Lin-Baker (Jen's Dad) hasn't lost a step in his comic timing.
It's always fun to see Wong. Also I believe I have done Juggling shows along side Donny Blaze's magic act.
Because it was handled as a TV series with individual episodes, that meant they never had to resort to "Main characters do stupid things to set the narrative back a bit and make the arc last longer." They simply had episodes about other, completely unrelated things. 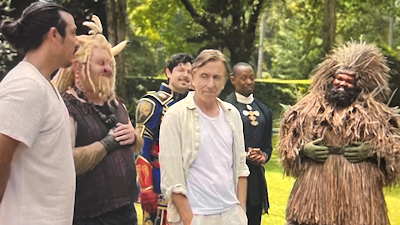 DC is still trying and failing to get more than one good film in a row with it's major characters, and Marvel is presenting a conversation between Porcupine and Man Bull in the same series where there's a huge battle against the Fabulous Frog Man and his "henchgoons." 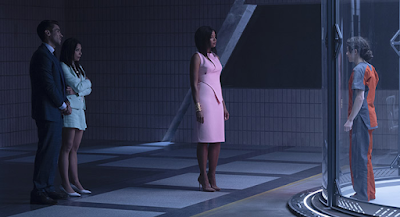 Not only that but we got Mallory Book, Pug and several other fun, non powered characters from Dan Slott's run.
I think my absolute favorite thing about this series was the fact that the creators knew EXACTLY the kind of people who would whine and complain about it and made fun of them MERCILESSLY in multiple different forms for all nine episodes.
Bring on season two!
For comic fans, Rainbow Rowell's current run is equally hilarious and well done.
My only (minor) complaint is the show didn't use the joke from the beginning of Dan Slott's go with She Hulk that convinced me to buy his entire run of the character. 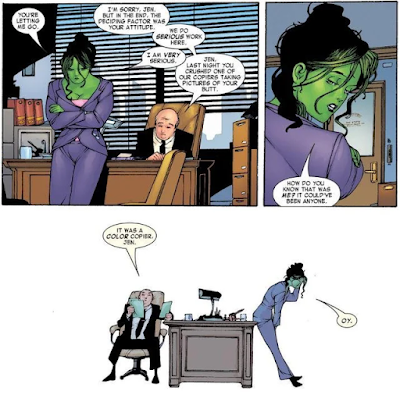 "Speaking of abominations...why did they go with the yellow suit?"
SAY IT LOUDER FOR THE PEOPLE IN THE BACK

As always, you are hilarious.

I loved all the minor 4th wall breaking "smash stuff.. and Matt Murdock" but I was meh on the finale.

Fair assessment. I liked it, it continued to poke fun at those who'd attack the show, and was straight out of the comics. There was an issue where she stormed the Marvel Bullpen writers room.