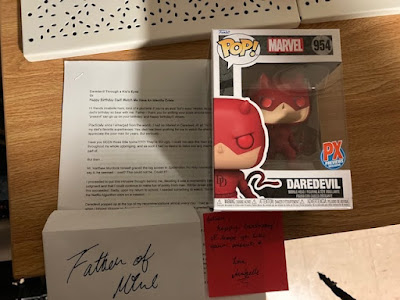 Daredevil Through a Kid’s Eyes

Happy Birthday Dad! Watch Me Have An Identity Crisis

Hi friends Anabelle here, kind of a plot twist if you’re an avid “kid’s eyes” reader, but it’s my dad’s birthday so bear with me. Father - thank you for shifting your posts around so this “present” can go up on your birthday, and happy birthday!!!

Practically since I emerged from the womb, I had no interest in Daredevil. At all. Yes, he’s one of my dad’s favorite superheroes. Yes, dad has been pushing for me to watch the show or at least appreciate the poor man for years. But seriously…

Have you SEEN those little horns?!?!?! They’re SO ugly. I could not take this man seriously throughout my whole upbringing, and as such I had no desire to delve into any media he was a part of.

Mr. Matthew Murdock himself graced the big screen in Spider-Man No Way Home. And dare I say it, he seemed… cool? This could not be. Could it?

I proceeded to put this intrusive thought behind me, deciding it was a momentary lapse in judgment and that I could continue to make fun of pointy horn man. Winter break passed, and this succeeded. Sadly, upon my return to school, I needed something to watch. This was when the Netflix Algorithm went on a mission.

Daredevil popped up at the top of my recommendations almost every day. I had a brief reprieve when I binged Victoria on Amazon Prime (Clara!), but other than that was greeted with a “WATCH DAREDEVIL RIGHT NOW” on quite the regular basis.

I held back. Surely I would not give in, right?

Wrong. I got sick of it popping up, decided “screw it, I’ll start one and turn it off if it bores me. Which it will.”

That night I watched the first 3 episodes. And proceeded to continue on until I finished the show.

I…like…Daredevil. (Phew that was tough). As I watched those 3 episodes, I decided it would be hilarious if I surprised my own father and kept my Daredevil-liking identity crisis a secret. Since I couldn’t share my thoughts with him as I watched, the idea for this “birthday present” was born. Here are my general comments/reactions for the Daredevil series (and Defenders also because I have read you *have* to watch it before season 3…surprise!) - you’re welcome :)

PSA - this isn’t entirely in time order, it’s kind of grouped together by subject and then by time

Thank you so much for this baby girl. It made me laugh bunches and I'm so glad you enjoyed it.
love
Daddy