I might as well start the same way I have when talking about every other superhero before getting to the new Daredevil show.

Yes, I can cite an issue of Daredevil as one of the first comics I had, in fact I can cite two at separate times. This is because:

A) I have way too many comics
B) I am extremely creative about how I define “first comics.” 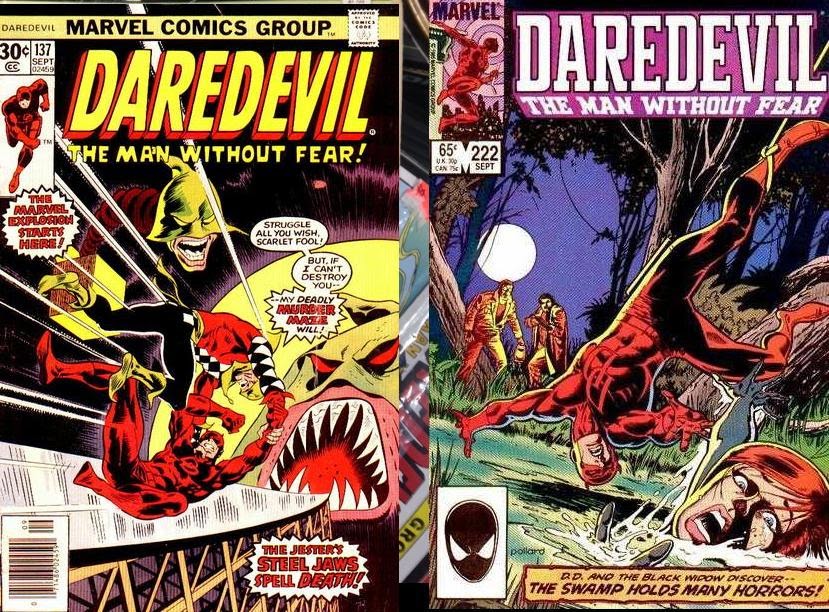 A Daredevil issue was one of the initial comics I got as a hand me down from my cousin back in the 70’s and also one I bought alongside the Avengers themed group of my first self purchased comics back in the 80’s.

Daredevil is one of the few characters that, from my admittedly bizarre perspective, has been creator proof.  This translates into me having a large pile of Daredevil comics.

As opposed to those other large piles of comics I have for entirely different reasons.

Yeah, that “full of crap” thing may be rearing its head again.

Anyway, I find as much enjoyment in the light and fun Stan Lee or Mark Waid Daredevil as I do the dark and gritty Frank Miller and Brian Michael Bendis Daredevil, or the introspective faith challenged Ann Nocenti or J.M. DeMattis Daredevil.  Whether he’s on a separate track (Brubaker) from the entire Marvel Universe to have a “realistic” take, or having breakfast with Doctor Strange (Smith) on the off chance a weird coincidence is due to interdimensional magic, I like em all. Conway, Chichester, Kelley, Lobdell, Kessel…it’s all good.

OK, done showing off.  The point is, I know the depth and breadth of Daredevil. 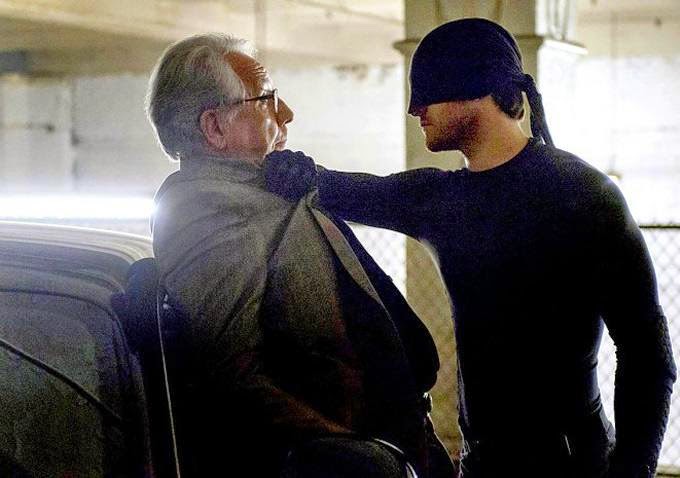 The new show is a fantastic representation of the dark and gritty stories of ole horn head, maintaining the humor that the comic always seems to have in it, even at its most bleak.  It’s often black comedy, or the dark side of smartass humor, but it’s there.

As much as I’ve been enjoying Fox’s Gotham- Netflix’s Daredevil beats it hands down as a not for kids superhero show.  Young Bruce and company suddenly seem a bit duller and much more convoluted than they did before.  The first of the Defenders' series eclipses it because:

The characters are more interesting.
The stories are more compelling.
The moments where I yell “HOLY &$#@!” out loud are more frequent.

I still have a problem with them swearing in a superhero show that makes me swear, possibly indicating my affinity for the highly screwed up and contradictory Matt Murdock.

Something I’ve mentioned before flavors my view of the series. It plays within the Marvel sandbox proper, instead of blatantly creating a new world to play in.  References to the comics and the existing Marvel Cinematic Universe are all in play.

The characters all behave as one who knows their comics counterparts would expect, but exist “realistically” in the world the Avengers films and S.H.I.E.L.D. show have created.

The array of villainy - physical, financial and psychological - is a blend of the terrifying, comical and unusual. There’s just a smidge of supernatural, super normal or perhaps “Inhuman” (wink wink) to hint at ties to the larger Marvel universe.

The main inhabitants of this world are as they should be.

Ben Urich is a crusading reporter harkening back to the publication dates of the comics he originally starred in.

Karen is plucky, perky and charismatic, but has a steely resolve along with a hidden, broken dark side, as do all of Matt’s (assuming eventual) love interests.

Claire Temple has similar qualities, replacing perkiness with acerbic wit and medical skills though. I can easily see her becoming the Phil Coulson of the Defenders shows, acting as the glue that holds them together. 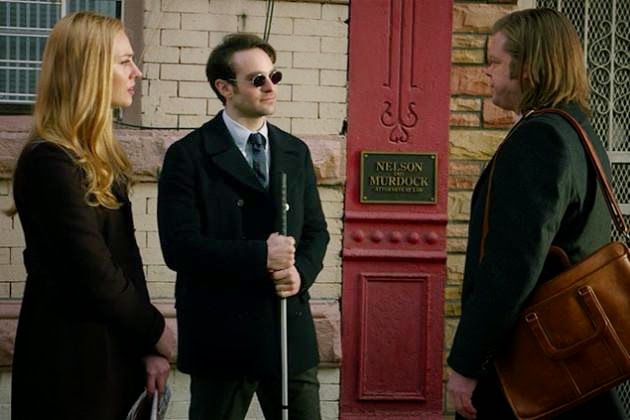 Foggy is…
Well, he’s Foggy.  He’s fun loving, smarter and braver than he looks and the voice of practicality if not truly reason. Despite this leaning, he often acts as the conscience of the group.  His biggest “power” though is being Matt’s best friend, and putting up with the insane amount of baggage that requires.  Even though sometimes it doesn’t look it, his safety and friendship is one of Matt’s chief goals, and though Foggy reciprocates, he also calls his partner out on the tremendously long list of mind bendingly rude and dangerous things he does.

Daredevil himself is presented as the pile of opposites he’s always been, which is befitting a blind man who can see much more than others.

This makes sense for someone trained by Stick, an extremely likeable and funny total and complete jerk.

Matt is a top notch lawyer who believes in using the legal system to protect the downtrodden, yet he ignores most of those laws to play vigilante at night.  He’s equally at home in worlds of expensive suits and high end real estate, as he is in a bloodied torn costume in the slums.  He’s a devout Catholic who struggles nightly to maintain his own moral code.  He has a secret identity, that he is absolutely horrible at protecting.

I know it’s from Man without Fear, but it was hard not to worry when he came out looking like Rex Smith.   Fortunately, they seem to have gotten everything else right.

The stunts and fight choreography are amazing. Daredevil’s parkour looking martial arts moves are captivating and fluid.  (Particularly in the famous “oner” from episode two.) However, when he reaches the point where he “lets the devil out” on his opponents, he drops back to the boxing style he’d have seen his dad use.

The Catholic angle is also used well.  He hasn’t turned away from the Church, but he’s not overly Jesusy either.  Most fictional uses of religion tend to overshoot one way or another. Matt uses his beliefs, and contacts with his priest as touch points for conscience and wisdom.  Father Lanton is not shown to be a condemner, hypocrite, evangelist, maverick, or a saint.  He’s just a man of faith providing counseling to one who needs it. He may be the most positive presentation of a priest in a TV show since Father Mulcahy.

The counseling is important, because of the whole Matt being crazy thing. It’s rare to see a superhero that displays such a combination of assuredness that his cause is righteous, and constant self-doubt that his methods justify any difference he's making.

His combat situations are similarly imperfect.  Unlike Superman, who shrugs off most injuries, or Batman who hides them until Alfred can tend to him back at the cave, Daredevil is frequently obviously beaten, busted and bruised.  This is the trained but still normal level human fighter who fought both Namor and the Hulk in the comics. Granted, they both beat the living snot out of him, but that's not the point.  The beatings never stop him, because he is the Man Without Fear, even when it comes from seemingly insurmountable foes beyond the physical level like the Kingpin.

Fisk is the one character I’m not sure about. That is, I’m not sure if I prefer him developing at the same time as Daredevil.  He definitely displays what's expected of Wilson Fisk, and excessively powerful in the scope of the show, but is also visibly breakable.   In the comics’ version, Fisk’s empire and outlook was solidified before heroes started trying to punch holes in it and him.

I believe the first season will end with Matt as the Daredevil we know (the gritty one, anyway) with his array of friends and allies.  Similarly we’ll see Wilson Fisk become the true Kingpin of Crime, with his relationship with Vanessa as the only link to the humanity buried deep within him.  She's still part of his world though, while he wants to protect her, as we've seen in Bendis's comics, she's in no way soft.

I’m saying “believe” because as of this writing, I haven’t seen the end yet.

This brings me to my one major complaint about the series, or more accurately its fans.

The day after all thirteen episodes appeared on Netflix, there were reviews and guides for every single one.

Masses of people spent over half the day watching the whole thing in a row.  Boom, done!

I feel very sorry for those people.  It’s a TV series, not a thirteen hour film.  There are specific breaks in the narrative.  They exist like the spaces between panels in a comic book, and for the same reason. (Thank you Scott McCloud.) Important stuff is supposed to happen in the viewer’s head in those spaces.

Zooming through in a single blast prevents one from savoring it.  Part of any media experience is interactive.  Puzzling about clues, meanings, trends, and personality shifts can’t be done if it’s all taken in as a single, rapid fire pile of Daredevil.

Sure, we’ve binge watched a series on DVD, but that’s as a “refresher course” after we’ve seen it broadcasted already.

I become enmeshed in an episode each night while exercising.  If I didn’t have work the next day, I’d watch a second one afterwards.

Robert Klein made fun of speed reading citing authors can agonize for days over a single word, and how the reader will miss the nuances barreling by at a thousand words a minute.  There’s a basis for that in fact.  The speed reading course we tried at work actually suggested slowing down for fiction for just that purpose:  sacrificing efficiency to enjoy the artistry.

The binge watchers got just over a half day experience of rushing through the story.

I got a week and a half of immersive entertainment, including mentally processing alternatives, possibilities and mental theories that kept me engaged and thoughtful far more than the thirteen viewing hours.

That’s also why I’ve avoided spoilers in this write up. To honor those with more patience than I capable of savoring Daredevil’s first season even longer than I did.

OK, I finished.  I have to agree with an on screen character:

Yes, it was awesome. However it wasn't only dynamic super heroic awesomeness.

Both conflicting sides of Mathew Murdock achieved victory.  As for which was most successful overall, another quote from an on screen character covers it nicely.

Princess Bride does predate Millers Man Without Fear mini, but I think they're both stealing from Zorro.

Thanx for playing along, though.