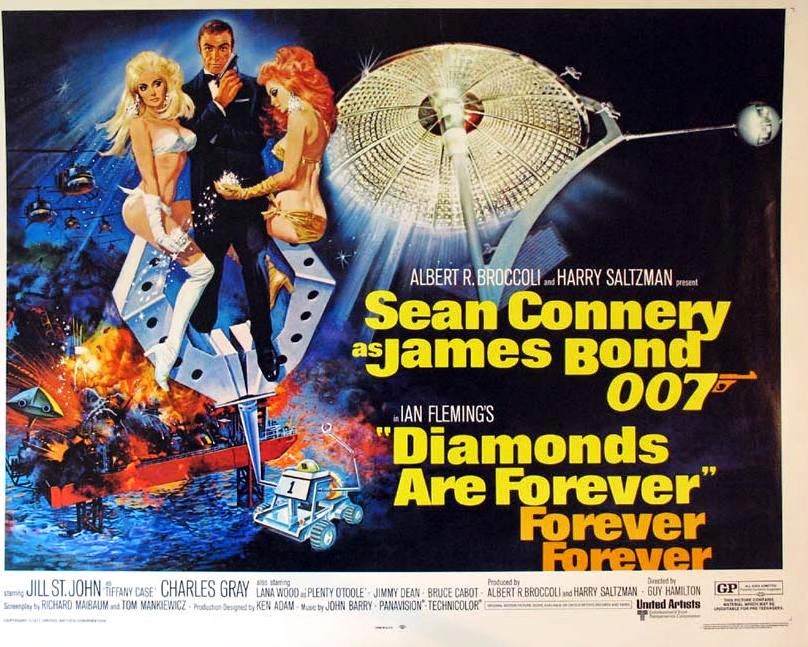 After constantly complaining about George Lazenby’s single turn as super spy 007 my daughter was enthusiastically awaiting the return of the original James Bond.

Therefore her initial reaction was a bit of a letdown:
“Wow, he looks really old now.”

Although she did later acknowledge he was JamesBonding Plenty O’Toole the “right way.”
There are some things a father doesn’t want clarification on.

His floor bound dive in the pre credits sequence was greeted with: “What was that?”  I tried to explain that it was a combat roll, which she’d seen Captain Kirk do many times.

Her answer, “I know, Captain Kirk does them much better though.”

She recognized Shirley Bassey by sound if not by name, but still thought the Goldfinger song was better…and she’s right again.

Since she’s my daughter, she thought the scorpion assassination, expertly used to break up a long bit of exposition, was hysterical.

As Bond traveled the world she was surprised when he ended up in Holland.  I pointed out he mentioned going to Amsterdam several times.  She was fully aware Amsterdam was in the Netherlands, she just missed the multiple conversations where the city was mentioned.

Sometimes she’s far smarter than she is attentive.
Yeah, that’s from me too.

Overall she enjoyed the ride, and made a few more astute observations.

She got decidedly indignant when 007 stole the moon buggy when I explained it was supposed to be where they faked the Apollo landings:
“They DID NOT fake the moon landing!”

When Blofeld dismissed blowing up Kansas because it would take too long for anyone to notice:
“That’s rude! People would notice, that’s where the Wizard of Oz happened. And isn’t that where Smallville is?”
That’s my girl!

She also did a spot on impression of Tiffany Case knocking herself off the oil rig with the recoil from the sub machine gun.  This led to another historical lesson about how it took a while for women’s roles in action movies to expand.

They’re not only entertaining, it’s educational!


The climatic fight scene at the end with Wint and Kidd had her from its initiation. As soon as she recognized them she let out an, “Uh oh.”  Although she required more lessons on the mechanics of action movie physics.  When Wint went overboard, she thought he might have survived because I had explained that jumping underwater protects one from any explosion in these films.  I needed to clarify that the rule only applies when one isn’t sitting on the bomb.