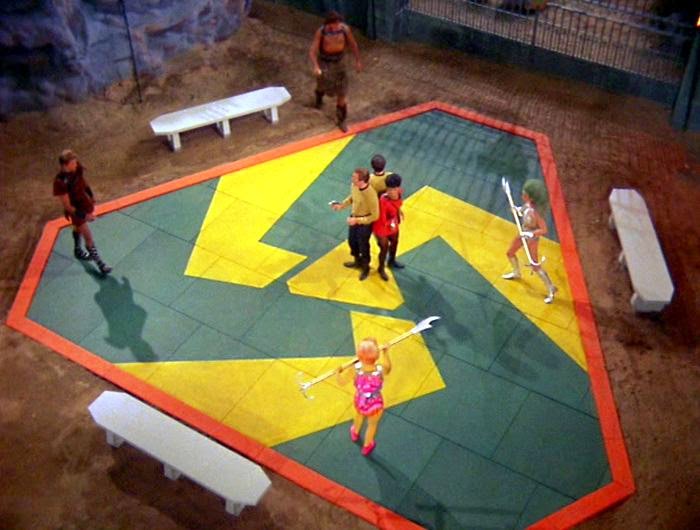 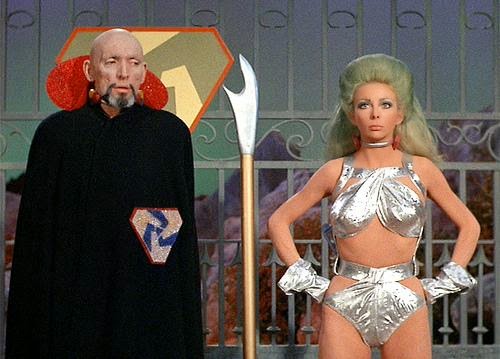 The Providers aren’t completely non-corporeal though, they’re disembodied brains.  Maybe they’re a failed group that didn’t make the full evolutionary step. Either that or the brains are fake.  Again, I’ll keep watching.

Captain Kirk has some displays of magnificence in this one, but the rest of the gang gets positive highlights too. 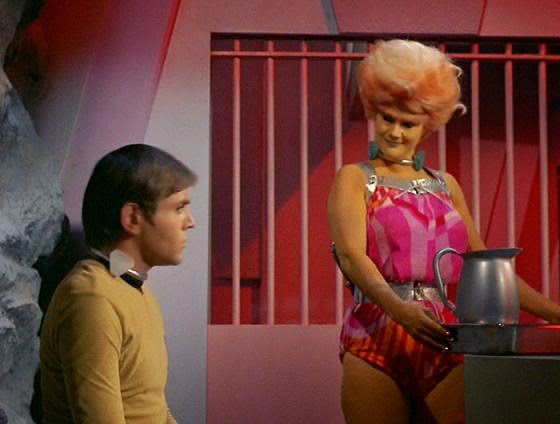 Except for poor Chekov again, who screams some more and is generally abused for laughs throughout the adventure.  No wonder Sulu continues to hide.

Back on the Enterprise there are a couple of gold clad, command grade women officers at both Navigation and Communications. Hey, I think the show itself supported my crazy theory explaining Uhura’s uniform color change. Go me!

The next three senior officers all show their abilities in tracking down the missing crew members, but without Kirk’s guiding influence, their interpersonal connections fray. 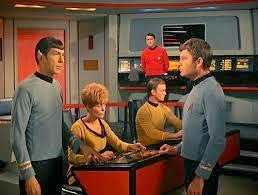 I think we have a first sighting of McCoy’s profane sounding question, “Are you out of your Vulcan mind?”

He and Spock argue much more, and at a much nastier level, when it’s born out of panic over Jim.  Scotty, as the other old excitable guy, usually sides with the doctor.  Though they pan out slower than his commander’s, Spock’s logic based hunches are always better than anyone’s except Kirk’s.  Once he finally reaches subtle but obvious levels of exasperation with his fellow officers, he lays into them with a “put up or shut up” speech. Given the option of officially objecting to his actions, as opposed to simply complaining about them, their loyalty to the first officer becomes obvious and unquestioned. 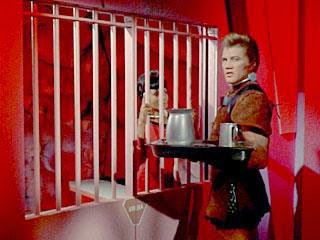 Back on the planet, Uhura makes an excellent showing, sadly off camera.  Lars the thrall ominously approaches her in the cell, and the Captain appears to attempt breaking his cell bars by the pure force of overacting. 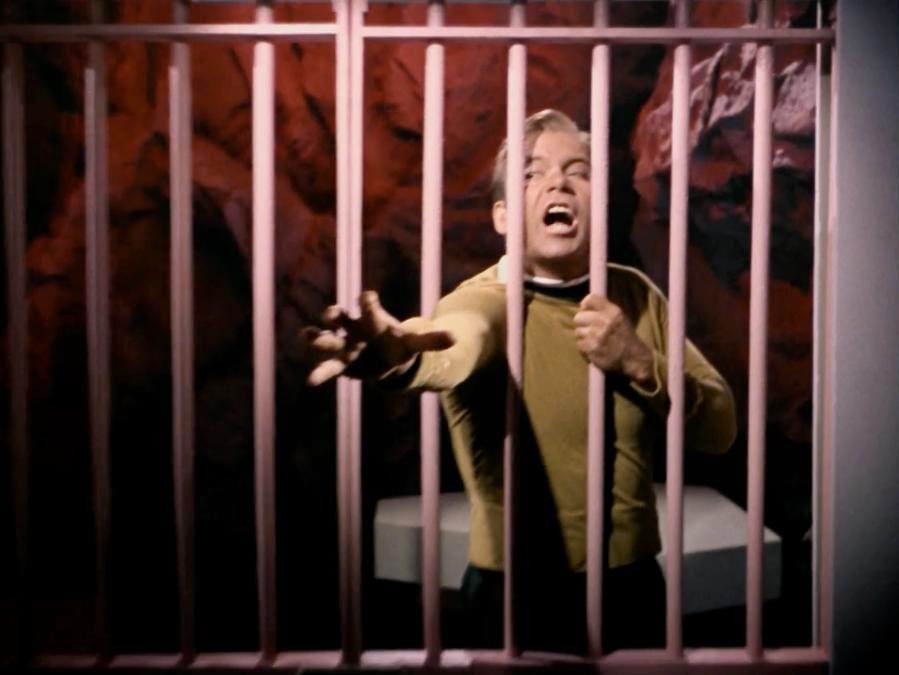 We don’t get to see what transpires, but the aftermath and his later deference to her clearly indicated Uhura handily kicked Lars’s butt.

Captain Kirk is still logging in his head, since we see him when it’s happening and at one point he’s being whipped. Perhaps he’s delirious?  More likely it’s a compulsion he really needs to work on as mentally itemizing his secret plans by date when being held captive by telepaths is probably not the best idea.

It is easy to make fun of the Captain, for his attitudes:
He points out that freedom and love are the most important things, unless he thinks they’re stagnating the culture, then struggle is. 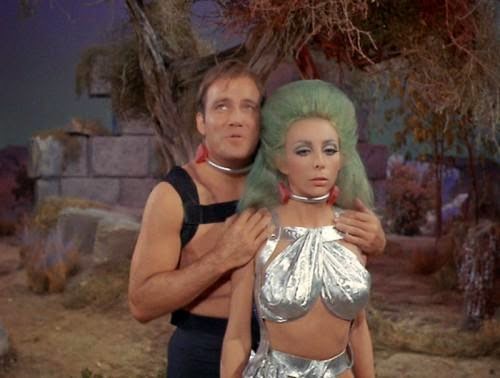 His initial strategy to escape involves seducing an innocent.

He’s the only one in the opening fight that manages to get his shirt torn off.

However, this is looking at him through a modern lens.  Yes, the shirt tore, but he’s also the only one to emerge victorious from the opening combat.

Similar to other 60’s era male heroes, such as Tony Stark, Hal Jordan, and James Bond, Kirk is looked down upon for being overly egotistical and self-important.

This misses key facts about that era’s heroes…

The Captain agrees to take a brutal whipping in place of Uhura. It’s the action that generates infinitely amplified loyalty from her for the remainder of the franchise.

Sure he runs to scream at center stage in an over the top protest of any harm done to one he’s responsible for, but then he’ll back it up with ending the existence of those responsible and going as far as dismantling an entire society in retribution.

Kirk’s greatest moment comes from what, at first glance, appears to be dangerous and irresponsible arrogance. 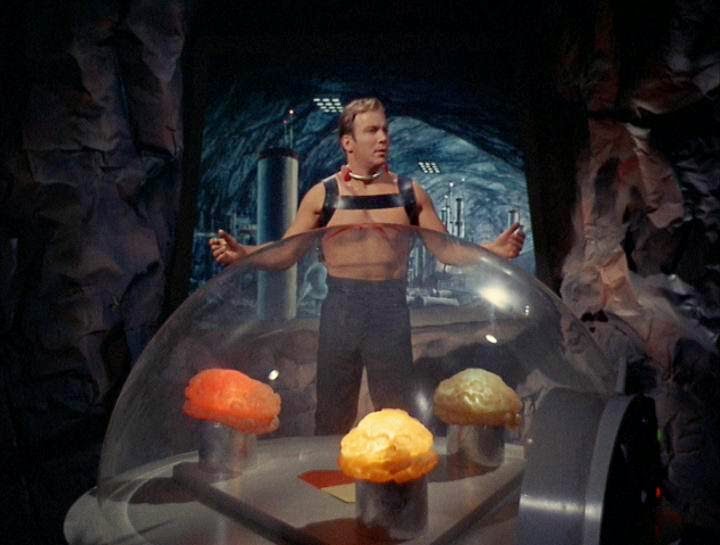 When facing the Providers, he begins by his standard tirade of insults, until he realizes the Brain’s weakness for poker like situations.  What appears to be one of his more brazen bluffs – claiming he could defeat multiple thralls by himself - puts everyone under his command at risk when the multicolored minds call the bluff.

Fortunately for all four hundred and thirty crew members, he is, as mentioned, awesome.
This time, he wasn’t bluffing.

Kirk had the time to observe and interact with quite a bit of the gladiator society.

There’s a very small population of Thralls with no children, possibly indicating the breeding pool is relatively new. However, Shahna states she has been there her entire life, actually indicating the Providers are terrible at keeping them alive.

One of the Thralls training exercises is fighting against a completely bound opponent.  No skill advancement there.

The weapons used appear to be fishing implements. 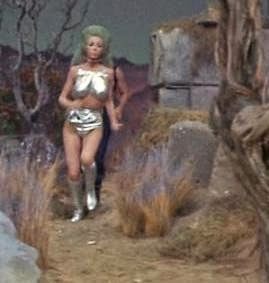 For a supposed warrior, Shahna runs like a complete sissy. (OK, that could just be her trying not to fall out of a tin foil bikini.)

His communications officer kicked the snot out of one of “their best” in a no rules situation. 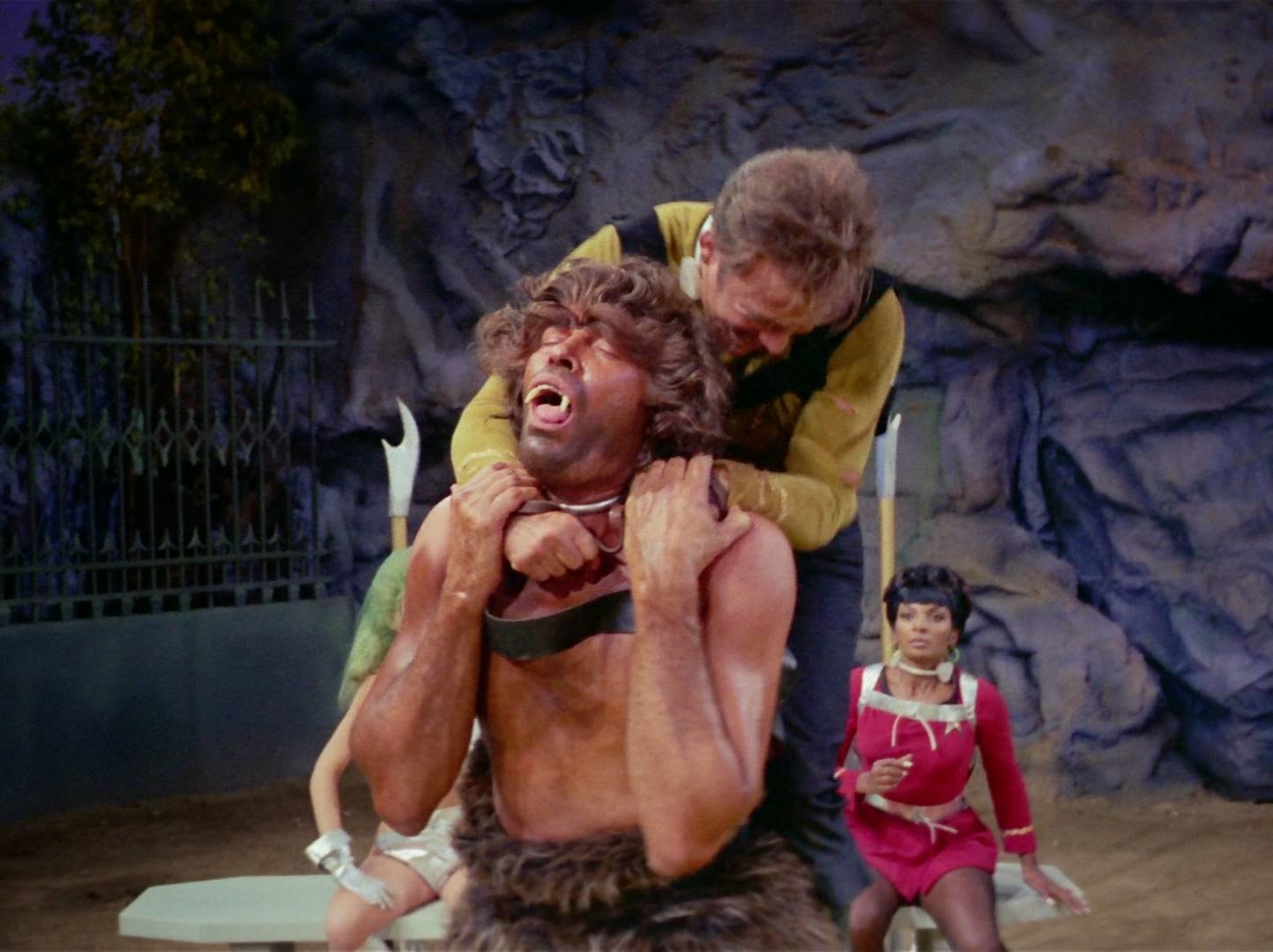 The Captain already defeated one warrior easily during the aforementioned shirt ripping, and was later victorious with his hands tied and facing the toughest Thrall.

Kirk realizes that the mentally superior Providers are absolutely atrocious at any combat training of the Thralls, who’s fighting skills are laughable.  There’s no bluff in his claim to be able to defeat three of them. (Including a criminally wasted Andorian) It’s a foregone conclusion based on his command and observation abilities.

There are questions though:

Everyone stepped off their colors in the final fight, and it ended in surrender after starting as a “fight to the death.”  The Providers aren’t the most trustworthy of organs in a jar, there’s no reason to believe they’ll change their ways, perhaps they knew Kirk would win, and that’s why he was brought there.

Maybe capturing the Enterprise officers was all part of their plan to rid themselves of the most unruly and uncontrollable of Thralls.

Without the bet, the Enterprise could have simple beamed all the Thralls up and left.

The Providers physical appearance and plans being a phony cover up for part of the extra galactic energy being conspiracy does answer one lingering question from this story.

What does a brain need with Quatloos? 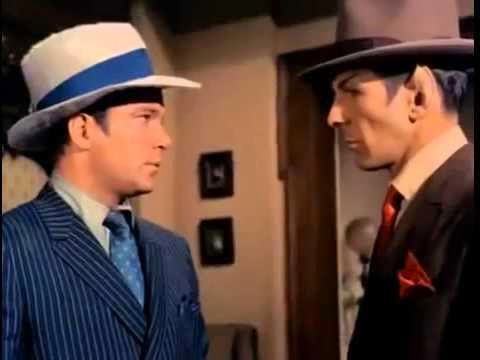 Note: She doesn’t need a “Mom title” for this one either, but that’s her favorite part.

Man, all the great ones are in Season Two aren’t they? This one is in close contention for my absolute favorite.

For the trivia hunters this has the famous pre-credit smiling “Vulcan.”  The clearly human extra turns up in later episodes, but the quick pass over him at Spock’s station before he embarrassedly leans out of shot causes some confusion on initial viewing.

Uncharacteristically, Kirk truly tries to follow standard federation policy on Sigma Iotia II. Initially he does believe, as he does in most cases, that the Prime Directive doesn’t apply, this time due to the Horizon contamination.  Bones and Spock straighten him out on that one immediately.

He sets out trying to maintain as much noninterference as possible.  In Jojo Kracko’s office it’s visually obvious the exact moment he realizes his second honest attempt has failed miserably and gives up, deciding to handle things the fun way. 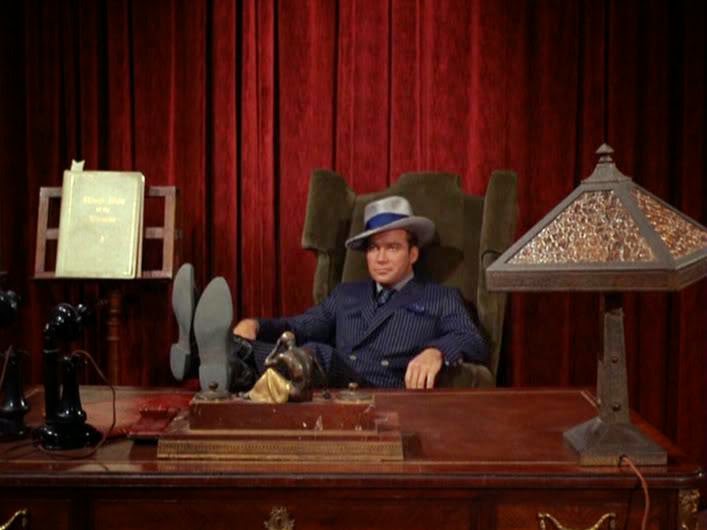 Captain James T. Kirk gets to combine two of his favorite hobbies:  being a historian, and impersonating a leader in a totalitarian society. 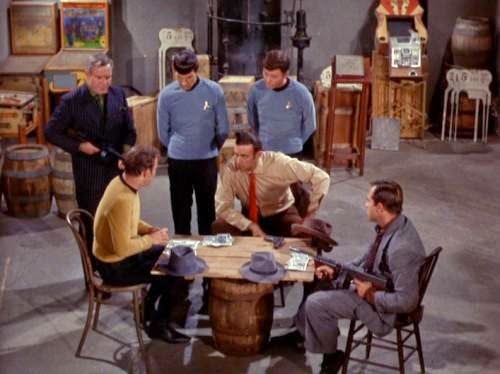 Even before he’s fully committed to the illogical path (following requesting and gaining Spock’s consent that, “Logic and practical information do not seem to apply here” of course) this combination allows the master of bluffing to pull off his all-time greatest:  Fizzbin. 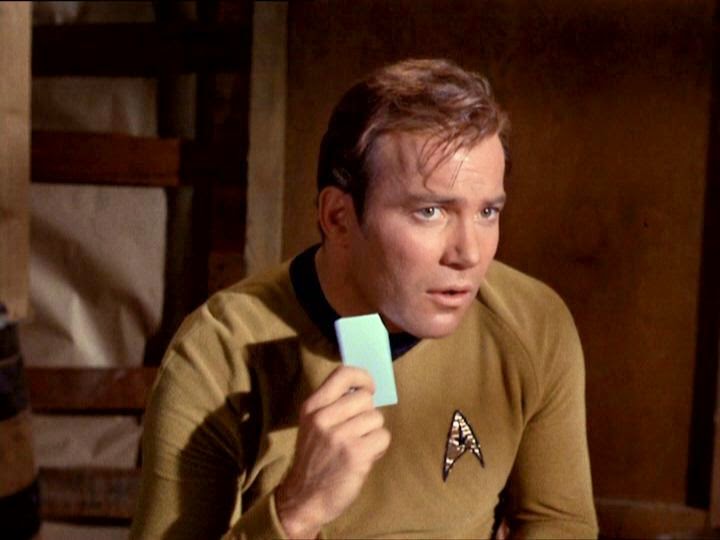 What makes it a truly magnificent bluff is that the reactions are real. William Shatner improvised the scene describing the rules.  In both real life, and in story, Leonard Nimoy and “Spocko” catch on immediately to their friend’s plans and join in to enhance the experience for everyone.

Scotty, while not at one with his commander’s thoughts as the science officer is, continues to be awesome although he has nearly no idea what’s going on. 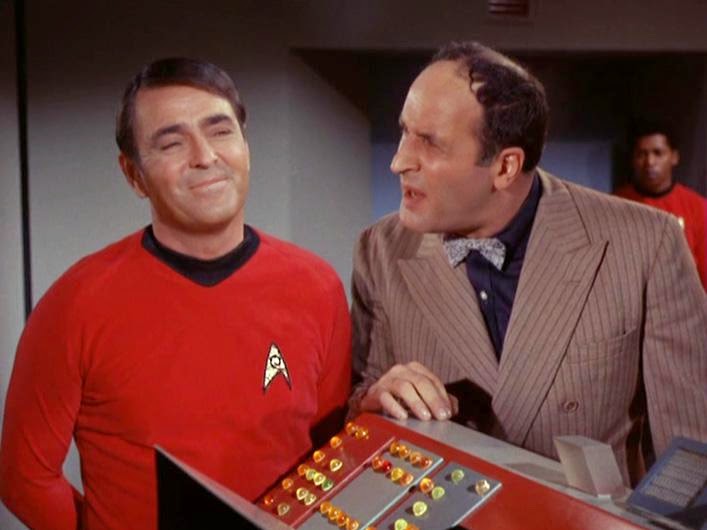 “You got nothin'. You mind you place, mister, or you'll... you'll be wearin' concrete galoshes.”

Kirk makes no such gaffs and his interactions with the kid: 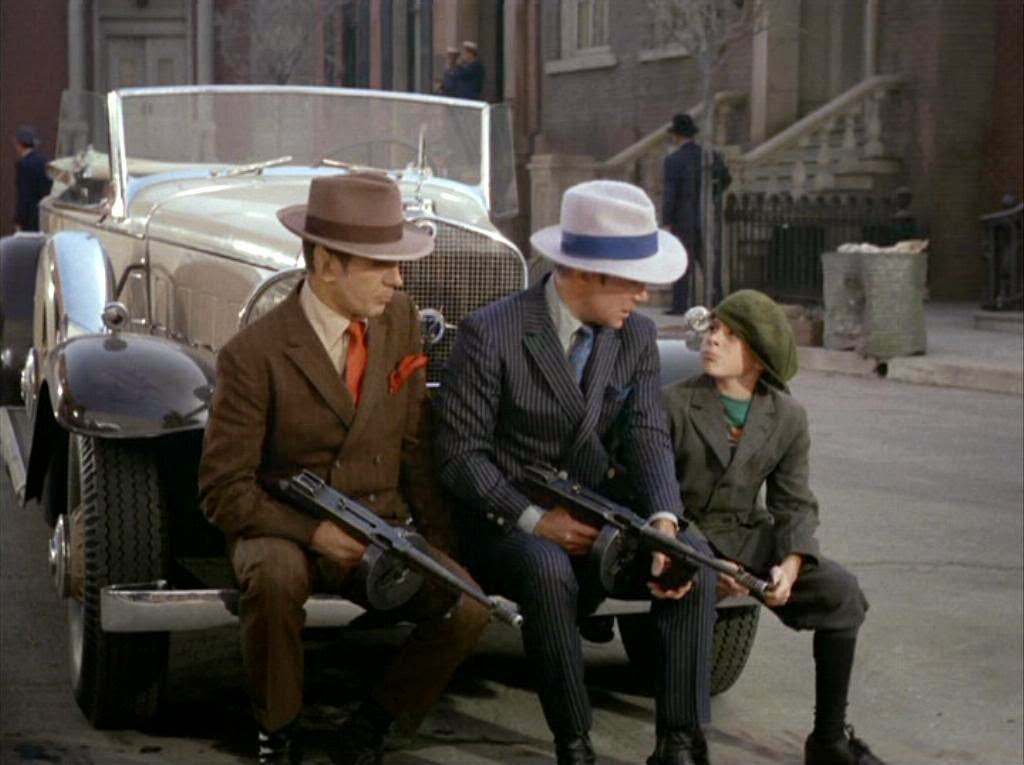 “I'm callin' you a babe, but there's nothing personal in it.”
And every other situation he gets into and out of demonstrates how easily the Captain inserts himself into whatever system he discovers.

While blending, he’s always prepared for action.  He’s obviously coiled like a spring in response to the overbearing Kracko.  His reaction to the seemingly amiable Oxmyx is just as prepared however. While relaxing with a friendly game of billiards, he continually holds his pool cue like a prepared weapon.

As always with the fun adventures, the threats from both men and their gangs remain deadly serious.  Hey, did anyone else notice that the mobs are wardrobe coded.  All of Bela’s boys wear fedoras and neckties, all of Jojo’s boys wear straw boaters and bow ties.  Topo and the rest of the gangs wear bowlers.  Kirk ends up incredibly lucky due to the uniforms of the organized criminals.  Look close, the guy who dies in the opening is wearing the exact same suit Kirk steals off Bela’s boy in the later act. 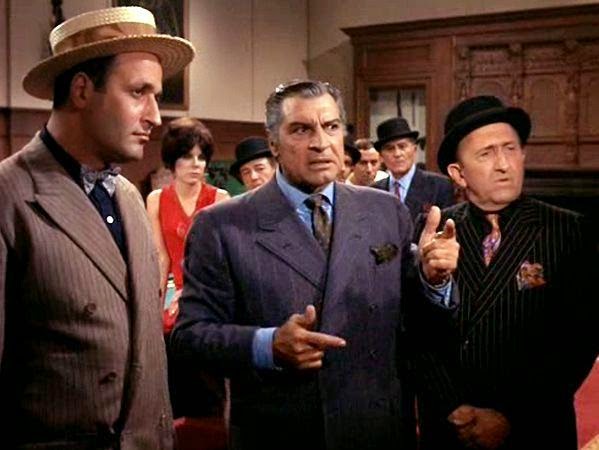 I think the Godfather video game I wasted many an evening on matches the world of Sigma Iotia II far more than the actual films it’s based on.

Spock relies more on his memories than luck, using the radio skills he obviously picked up visiting Edith Keeler in in Earth’s past. He’s also been spending far too much time with his Captain, as the Science Officer is keeping a log when captured. At least he’s telepathic; it makes a smidgen more sense.  Of course once Kirk is in full takeover bluff mode, Spock's practical experience gives way to following the Captain's lead. 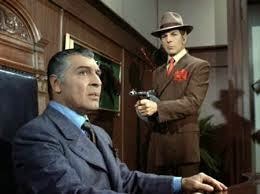 Makes one wonder if the Horizon carried any other books?
Was Chicago Mobs of the Twenties the only printed tome on board, or just the most exciting?
What would have the world been if it was a book on Ancient Egypt, or a treasury of Peanuts comics?  Happiness is a warm Vulcan?
If it was a history of Chicago mobs, why does everyone talk with a New York accent?
(Because it’s cooler, and better, that’s why.)

An exceedingly rare occurrence happens for the second time in two episodes. Kracko call’s Kirk’s bluff.  Once again, though, the Captain isn’t bluffing.  Besides being incorrect that the two other guys on the Enterprise are the only ones there, he misses two important facts.

1) Kirk and Spock, being only two guys, took out six armed mobsters on their own, in a fight scene far too awesome to be shown on camera.

2) The Enterprise herself packs a heck of a wallop. 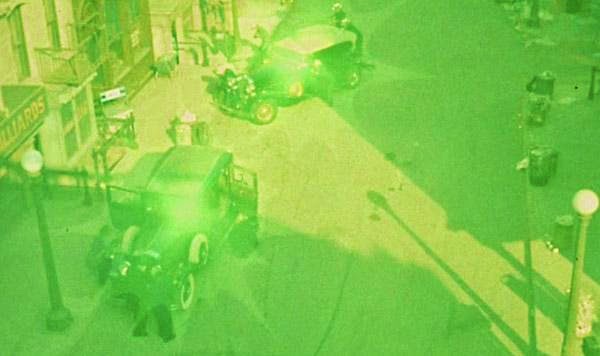 Then again, how could Jojo have known about the ship’s phaser’s capability of stunning a wide area when no member of the crew seems to remember this fact any time before or after this story?  Shame, it would have pulled them out of a dangerous situation about once every other episode or so.

Captain James T. Kirk continues playing Fizzbin right up until the final freeze frame.  He clearly is making  up his plans on the fly and pulls the whole, “I propose our cut be put into the planetary treasury and used to guide the Iotians into a more ethical system,” right out of his personal photon torpedo tube. 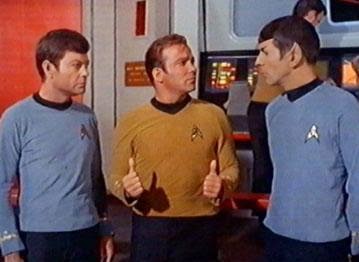