Why I Should be Legally Barred from Keeping a Dream Journal 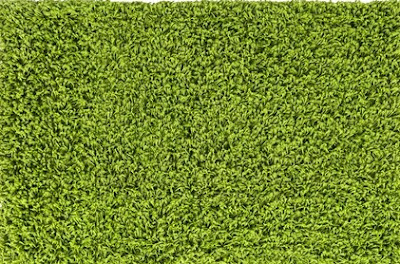 Introduction:
My dreams are usually weird enough to begin with that there should be injunctions against me trying to record them.  A few weeks ago, however, things went completely off the rails.
I had a nightmare.
Big deal, everyone has nightmares.
I myself have had them regularly since my earliest memories...
creating some hellish memories for my parents as well.
They have continued through what passes for adulthood, likely because I barely ever get enough sleep to remember my dreams. It is a common occurrence when one finally does get enough sleep, the first recalled dreams are nightmares.
This time, I had a nightmare that lasted all night.
But I didn't sleep through the night.
I woke up repeatedly, and every time I fell back to sleep, no matter how I tried to distract myself when awake, the story continued, in a very neat five act structure.
Surely my brain has better things to do than go on multiple coordinated location shoots to scare the crap out of me.  As usual, at the points I realized it was a dream (which was pretty obvious since it continued all night) I could nudge things here or there. Trying to take full control wakes me up, and that is how I leapt out a couple of the times.
Act 1-
The story was clearly set Up the Lake but brain location scouts did a fairly rotten job of it. It's possible that the Lake needing to be smaller and much easier to walk around to serve the suspense of the plot led to the shoddy recreation. The action all took place on the shoreline around the(far smaller than it should have been) Lake.  There were a bunch of dream extras filling in for family and friends, and the Lake itself had only a few tiny buildings and occasional trees around it. Perhaps they were conserving the budget as they knew the length of the project. 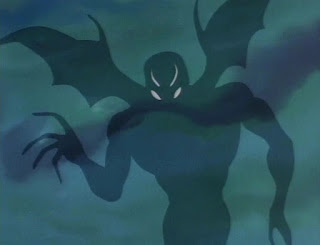 The gist was: there were these smoky, spooky things that would possess people, or kill them...or something. It's a little fuzzy. They were definitely bad.  In hindsight, they looked kind of like the Shadow Demon from the old Dungeons and Dragons cartoon.
Now that I think about it, the "Source of Evil" was connected to the old Friary, which is where I put the published Dungeon when I made an Up the Lake D&D adventure.
Maybe it's not a coincidence? 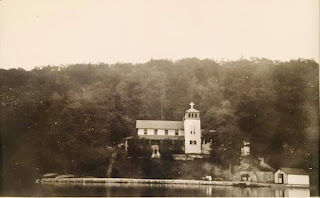 I woke up with an unpleasant start when the smoky things were coming for us en masse.
Act 2-
Once I calmed down and konked out again, there was a time jump.  My dream scriptwriter was too lazy to figure out how we got away from the approaching smoky, spooky things, I guess.
Sometime while I was awake, we determined we had to go up to the Rhinebeck Fair to stop the evil, or escape the evil, or something. It probably wasn't to escape them since the half abandoned fair grounds were clearly connected to the evil somehow.  Possibly whatever happened at the Friary during the time skip revealed the true source of the smoky, spooky things.
Wandering around the new shooting location, it looked like a mix of the actual Duchess County Fair with almost everything closed, and the Harvest Festival on a really cold and dank morning before anything opened. There were some creepy carny people around but they didn't seem connected to the evil.  They only had their natural creepiness. If the dream writing staff was paying attention, there could have been a nifty cross over with the floppy neck guy dream from a while ago.
Skulking behind some tents, I figured out where the creatures were coming from, and I had to go there. The dread got stronger and stronger as we approached.
Then I woke up all flustered again. Plus, I had to pee, because I'm old now.
Surely, this would break the chain.
Act 3-
Spoilers- the chain was unbroken... And don't call me Shirley.
When we last left this poorly connected story, the true main source of the evil was identified at the fair grounds. It was a mix of the actual Disney World Haunted mansion,

the Psycho House (not the real one, the one on the Universal tour) 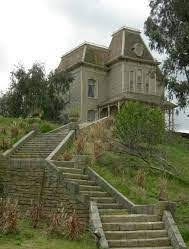 This led to a mix, of impressive Disneyesque effects, and some truly lame and awful looking ones within. However, all the effects were operated by genuine evil, smoky, spooky, demony things.
Therefore, this part of the dream matched most of my nightmares as a perfect blend of terrifying and stupid. There was a panel open showing behind the scenes where all the real monsters were. I woke up in a sweat yet again as they came out to get us, and we leapt out of the poor excuse for a Doom Buggy preparing for Fight or Flight.
I got up, walked around, drank some water, read a little and tried to shake the inevitable feeling that not only was I going to return to my night of horror, but it was going to get even dumber.
Act 4-
We got out of the Faux-nted Mansion...in an unknown way... but were still in the town.  We greatly desired to leave.  Unfortunately, when I turned around, the minimum wage earning dream extras playing Rosa and Anabelle were nowhere in sight.  I started calling them, and a woman nearby, in an extremely clever ruse, asked their names, typed on her phone, and suddenly I got a text from an unknown number saying, "We'll be back in a couple of hours- this is from Rosa."
I was not fooled by this mastermind scheme.
Aside- I believe this was the first dream I have ever had with texting in it. That should give an idea of how long the dream prop department lags behind reality. 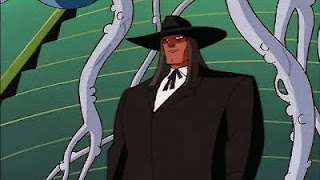 I was also not fooled because the few people visible in the town had that creepy, evil evangelical vibe going on. It was like the "Unity" episode of Superman: The Animated Series.  Clearly they were all worshiping (or possessed by) the evil, smoky, spooky, demony things.
With no other recourse, I had to wait in a hotel room featuring the ugliest green shag carpet I have ever seen, or imagined I've seen, I guess. It covered the floor, walls and ceiling. Considering how much budget savings there was throughout the night, the gang could have sprung for better set decorations.
Rosa and Anabelle returned, played by uncredited extras yet again, and not the same ones. That was probably important to the tale being told, but using dream nudging abilities, they were neither possessed nor obvious duplicates. I really hate those plot clichés and since I was going to have to live through it, I refused to deal with them.
The townsfolk, however, were problematic. We could see them shambling menacingly toward our building through the window.
I woke up traumatized once more to take my morning pills, which I always do about two hours before I have to get up...
Because why should my dreams be the only weird thing about my life?
Act 5-
Unlike all of the other "commercial breaks" in this interminable nightmare, when I fell back to sleep in the morning, the story and threat were exactly where they left off.
I guess it was more of a bed and breakfast than a hotel, fitting for the quaint (if evil) little town. Whatever we did on the fair grounds must have worked, as I knew if we escaped, the demonically possessed yokels would remain at their home address and not yield a global take over.  Perhaps we shut down a portal in the Mansion Attraction, and the evil-vangelicals lacked the numbers and the desire to leave town.  Still, they were coming for us. We went out the side door of our room (possibly nudge created) and ended up in the garage where they had stashed my Bronco. (I have not owned that vehicle for almost twenty years. The dream prop department SERIOUSLY  lags.)  The garage was also covered, floor, walls and ceiling, in the same hideous green shag carpeting. 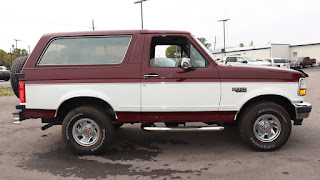 We drove out with the townsfolk entering the garage right behind us...and learned they had built a hallway coming out of the garage for MILES, covered with the repulsive green shag carpeting. Great use of funds there, dream set builders.  Maybe this construction effort was why the possessed people weren't going to take over the world, they were too tired.
While evil, they were considerate enough to install windows in the hallway here and there. We could see signs of civilization along Route 9 outside, (amazingly, that they got that location right) but there was no way to exit.  The only choice would be stop and get caught by the car following us, or turn around, dodge that car (it was a disturbingly large hallway) and head back to likely be captured at the rustic yet possessed village.
Luckily, a blast of logic cracked through the (stupid but still genuine) dream terror. If they had built this ridiculously long hallway in the brief time I was in the bed and breakfast, they must have used balsa wood to do it in time.
Therefore I took a hard right, smashed through the thin wooden wall...
And ended up driving inside of a mall in a fairly decent recreation of the Blues Brothers chase scene. I guess that's where they spent the majority of the budget for this fiasco.
It turned out there was only one car following us. As we left it behind in the rubble my alarm signaled it was time for what would be a comparatively dull day at work. 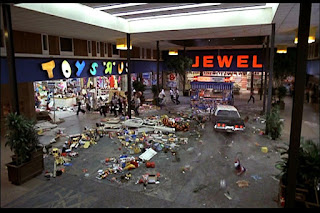 Your head is a very strange place, thanks for letting us visit.

Thank you. It is an interesting place to visit, but I wouldn't want to live there.

I love how you describe the illogical, inconsistent, annoying aspect of dreams.

I find it so frustrating to record these aspects of my dreams.

Thanx much, and thanx for reading.

Maybe its because I've grown used to dealing with illogical, inconsistent, annoying things while awake?