I Miss the Circus

Lately, I've been missing my childhood's annual arena trips to see Ringling Brother's and Barnum and Bailey Circus. We did take Anabelle to see it one of the seasons shortly before it closed down, but she doesn't have a connection to it, and doesn't understand mine. 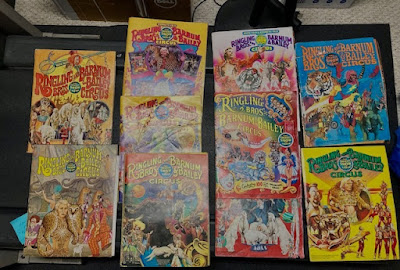 Yes, these pictures are terrible and I could have gotten better ones online. (But hey! So could you!) However, going through these old programs really brought back the memories, and more importantly the wonder, into sharp focus. (Even if the pictures are not in sharp focus.)
By the point we took Anabelle to "The Greatest Show on Earth," the animals were gone, it was down to one ring, and  there were strong influences by Cirque du Soliel and flashy, Vegas type magic acts.  That removed it from American Circus history...which is similar in a lot of ways to two of my other obsessions, Vaudeville and Professional Wrestling.
We went to the Circus every year when I was a kid. Eventually to the Meadowlands in NJ, but originally to Madison Square Garden itself.  That historical venue added quite a bit of magic on its own. There was a participation atmosphere for us "Children of All Ages" over and above the cheering, ooh's and aah's. In later years they sold flashlight bodies with what looked like emergency vehicle lights on them that could be spun in celebration, lighting up the audience. When I was really young they sold little pen lights (that looked like cigarette lighters) on the ends of long vinyl strings. Those would be spun and the crowd was filled with larger circles of light. I begged my parents for one each year. They finally got me one...and I immediately spun it into an impact with the guard rail, shattering it into a zillion pieces.
Before that little diversion into childhood disappointment, we were talking about the circus itself, weren't we?
It really did have a magical feeling to it. However, I'm finding it hard to describe to people who never experienced it. Part of it is that Cirque, which has far reaching influence these days, tries so hard to be creepy and weird, while Ringling was all about being overwhelmingly flashy, fast and fun.  The other part that's hard to get across is the sheer amount of things going on at once. 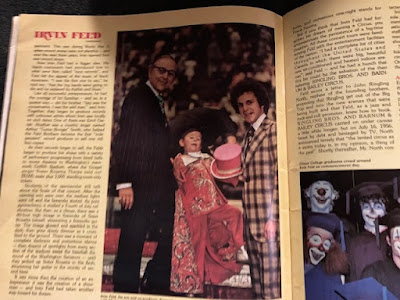 Ringling Brothers and Barnum and Bailey's Circus was the World Wrestling Federation of circuses, with the Feld brothers in the Vince McMahon role. They took what had already expanded from tiny travelling tent shows and made it an international, arena filling spectacle, while retaining the sense of history. Yes, that is Michu, the world's smallest man and one of their star performers...who for the anniversary celebration dressed up as Tom Thumb, one of Barnum's star performers. There was showmanship with an understanding of its own past throughout. 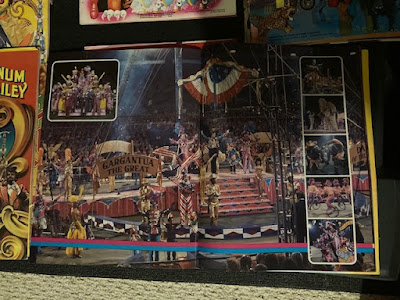 It was incredibly varied and huge. Misdirection was the name of the game back in the carnie days. P.T. Barnum espoused and enhanced it extremely well during his time, and it worked in the arena shows on a grand scale. Having three rings of action going on at once yielded two outcomes. 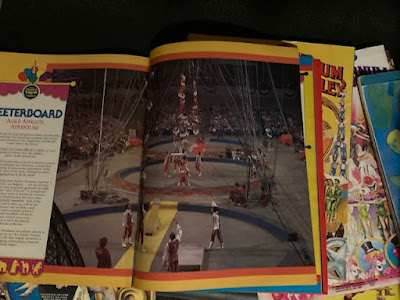 1) There were amazing things going on everywhere you looked. The sheer volume was too much to take in. In that way it overwhelmed noticing if there were minor individual drops in quality, and guaranteed at least one cool thing could be seen at any moment.
2) The feeling that when you watched one act, you could be missing something even MORE SPECTACULAR in another ring added to the excitement. 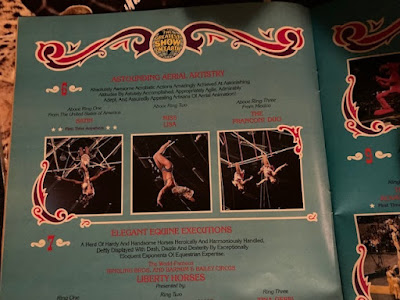 Even the trapeze acts would go on two at a time, alternating the more impressive stunts, while most of the time (even for aerialists,) there were three acts going at once. 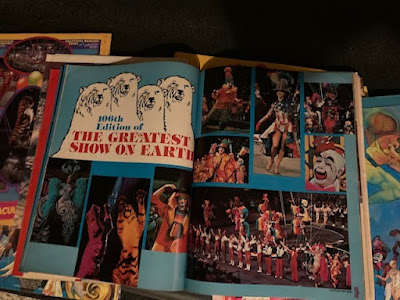 The variety was astounding. There were animal acts from small dogs to elephants. (Including freakin' polar bears!  How does one figure out they have that skill?) Human performers were acrobats on land and air,  historical shout outs to famous performers of the past, graceful dancers, human cannonballs, and anyone else with an unusual talent they could stick in a sparkly outfit (or a monkey suit on some occasions) and send out there. I felt an extra sense of excitement for the unicycle basketball team - The King Charles Troupe. This is not because of any affinity for basketball or unicycling, both of which have led to embarrassing failures and injuries. It's because within that enormous international cast, that group came from my home town of The Bronx. 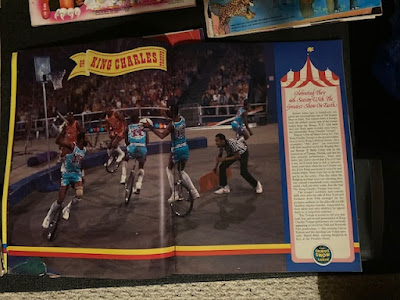 It was only when the huge headliners would go on that there would be one a single act, dramatically announced "IN THE CENTER RING!"
I got to see two of the best, multiple times. 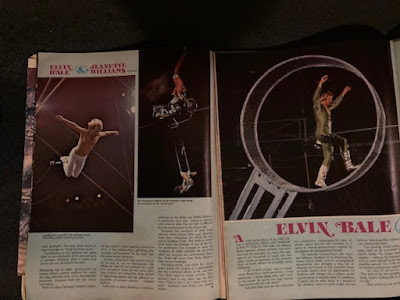 Elvin Bale "The Phantom of Balance" and "The World's Greatest Daredevil" was a fourth generation performer who's family went all the way back to Vaudeville. (I feel like he was my Mom's favorite, I'm sure she'll confirm or deny it when she reads this...hi Mom!)  He did insane high wire (on a motorcycle), solo trapeze (heel catch) and other impressive stuff. He did things on the Wheel of Death that most performers couldn't do on the ground.  Sadly, a human cannonball accident at another circus paralyzed his legs. He became a booking agent and worked in management for Cole Brother's, because the circus does not leave people behind. The other was "The Lord of the Rings" Gunther Gebel-Williams. He was my absolute favorite and his wife and kids also performed as animal trainers. Yes, I know the small travelling circuses were horrible for animals. And I've heard some first (or first and a half) hand accounts of what an irritated elephant can (justifiably) do to their fellow performers when chained up back stage.  But the animals at Ringling's looked healthy, and the bonds Gebel-Willams had appeared visibly strong and caring in his performances, the multiple TV specials I watched and other information I looked up.  He really seemed to have a strong and respectful connection with tigers, other big cats, and multiple other species he shared that center ring with. 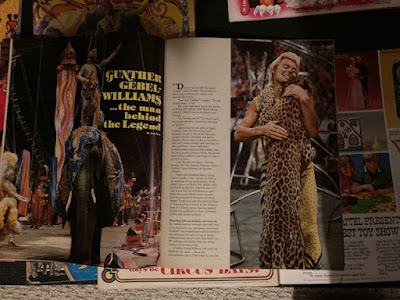 The circus was an uncontrolled amount of fun.  The feats, the presentation the over enthusiasticness of the ring master, it all worked together to deliver spectacle after spectacle.
Even stuff like "The Living Unicorn!" worked. Yes, it was clearly a fluffy goat with it's two horns naturally(ish) fused together. However, the goat wasn't the point. It was the presentation, the pizzazz, the giant circus parade around the arena with pomp, and animals and performers that made what at any petting zoo would be an odd looking resident become the drama of THE LIVING UNICORN!!! 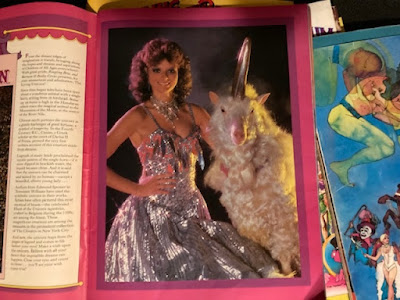 Speaking of pomp, the Circus band!  Playing live, with three acts going at once, and always hitting their cues to point out the highlights of all three rings!  Their loud, brassy style was a big part of the fun.
Woo hoo!
There was constant amazingness filled with thrills, laughs music and fun, featuring catchphrases that highlighted it all.
And there was always something going on, except for the intermission. Whenever set up time was happening, they'd -
SEND IN THE CLOWNS!!!
For those of you raised in the world where it seems only horror based clowns exist...boy did you miss out.
I blame Cirque and their creepy sunken eye, slow motion walking, boxing glove wearing, audience pestering version of clowns for this too. Steven King probably has a lot to answer for too.
Much like classic professional wrestling was really designed to play to the arena, Ringling clowns were designed to play to a similar large and distant audience.  That's why the clothes, shoes, props and faces were excessively exaggerated.
They weren't hiding behind bushes with sharp teeth, angry eyebrows and fake bloodstains to jump out in your face.  They were performing classic, burlesque, baggy pants style slapstick.
Trust me, they were funny, and they tied the whole show together. 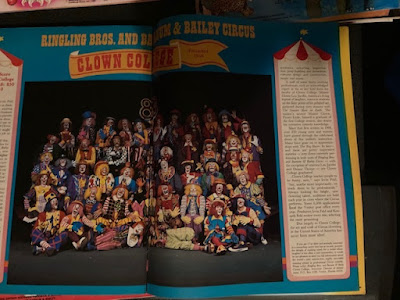 Aside- Yes, there really was a Ringling Brother's Clown College. Sadly, it never occurred to me that it would only be an eight to thirteen week program. (Shrinking over time.) I may have been tempted when I was young, in shape, and juggling all the time to expand my performing and comedy writing abilities.  Foolishly, I assumed "college" meant it must be a full four year program, and who had time for that?
Another connection to wrestling (and Vaudeville) was that there were families who'd been in this travelling based world for multiple generations. Sometimes they'd continue with the current act, and sometimes they'd do something completely different. (Many of Elvin Bale's family members, and his wife, were animal trainers.) 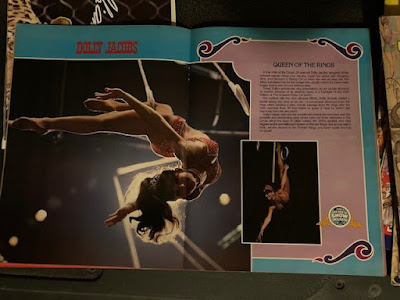 We had seen Dolly Jacobs, a fantastic center ring aerialist who swung by her hair among other things, on several occasions.  My greatest thrill came from seeing her father, though. Lou Jacobs was one of the greatest clowns of all time. He invented the red ball nose, the clown car and many other gags. Called a natural born teacher, his written notebook of clown sketches was said to have enough material to last fifty years. He was the first person to be featured on a US postage stamp while still alive, and an inaugural inductee into the Clown Hall of Fame. 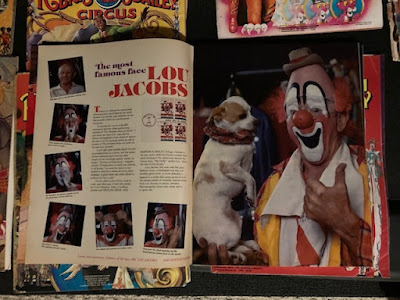 We got to see him live! Even from up in the arena seats, and with him getting close to retirement, he could expertly play the crowd, and draw out laugh after laugh. It was an honor to watch him work. 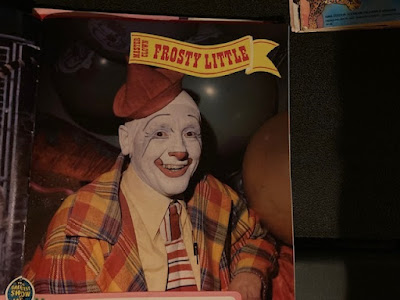 We also got to see his protégé, Frosty Little. He was just as entertaining, and it was very cool to hear the announcement that he was given the title Master Clown.  Yes, there were clown rankings. Boss Clown was the head of that particular show, and Executive Clown was over both touring Ringling Brother's units. But Master Clown... only four artists ever received that lofty title. Jacobs and Little were the final two, and we got to see them both!
Aside-There are three main clown types, based on makeup and the personalities that go with them. Little was a Whiteface, Jacobs was an Auguste.  The third is the Tramp, an American invention.  Emmet Kelley, Red Skelton and of course Charlie Chaplain are classic examples. (Ironically, Benny Hill did some great, and very sweet, pantomime sketches as this type.)  Some places list Character Clown as a fourth type. I always felt that those were other types of clown with a specific role. But what do I know? (Other than all that clown information I just vomited forth.  Maybe I  missed my true calling?)
I've expressed missing the non-stop spectacle of The Ringling Brothers and Barnum and Bailey Circus through these random memories, but I still don't think I've truly captured it. The perpetual onslaught of bright and impressively unbelievable acts that came from the king of arena circuses was something you really had to be there  to understand and appreciate.
Thank you for coming along in my attempt to celebrate it.
AND MAY ALL YOUR DAYS...
BE CIRCUS DAYS! 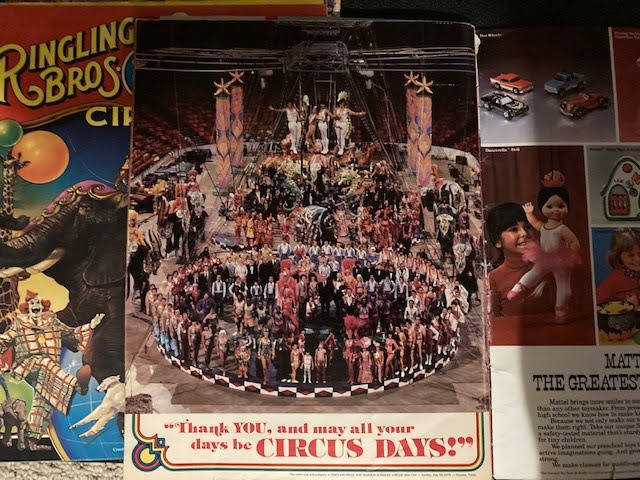 Email ThisBlogThis!Share to TwitterShare to FacebookShare to Pinterest
Labels: random neurons, The Stage