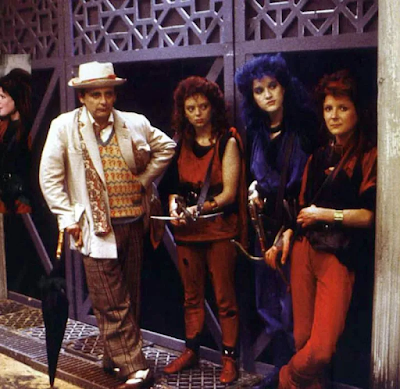 That first year, snow or not, we had more contacts with official Fraternities than we would once we were fully isolated from them, by choice, in the E-Dorms.
Most weekend nights freshman year, our gang would be in the hall, playing Cosmic Wimpout or something. Our side job was steering the drunk folks who staggered back into Bray Hall towards their rooms. It's nice to know one can provide a public service.
I went to exactly two Fraternity parties in college. The first was during pledging time, I don’t remember who talked us into stopping in, which of us went, or what fraternity it was, not that it mattered. There was music and flashing colored lights in a room filled with solo cups. I spent a while observing the alien culture, trying to figure out the rules and signs of their social hierarchy for a while. Then we left. That was more than enough.
The second, like much of my life, was a matter of strange timing and ridiculousness.
Fraternities all had individual images, and it was usually campus based.
Although Alpha Chi Ro aka, “The Crows” played the role of “the fraternity fraternity” on every campus I’ve ever visited.
Looking up names, I see they’re currently on probation at RPI from March 2018 until next December. Nice to know some things don’t change.
Some were quiet and, some were known for partying. Theta Xi, “The Zoo” has the Alpha chapter at RPI, which means it can’t be permanently closed. However, it was temporarily shut down a couple of times to let all current members graduate before starting up again.
Unsurprisingly, “Delta House” (Delta Tau Delta) was known for causing trouble. The whole thing was closed for a year before we arrived because they cut down a giant pine tree in front of someone’s home. The pledges in the class when it reopened all made paddles that looked like Christmas trees, saws and axes.
Some were sport based, some were cultural or arts centered, and several were service fraternities. Alpha Phi Omega was the lead in the service group. They really were filled with genuinely kind people. And I'm not just saying that because of the cute and intelligent redhead I tried to meet who was a member. Especially since her dweeby boyfriend was also a member, offsetting any bias.
Zeta Beta Tau (sadly, now closed due to lack of interest) was known on campus as the geeky fraternity.

I’m going to let that sink in for a bit.
ZBT - a fraternity at an engineering school in the Eighties- was known by attendees at that school for being the “geeky one.”

I said…
In my head…
About a week and a half later than that night when I really said:
“OK, I’ll show you what room she’s in so you can both leave right now.”
Once again, illustrating, quite clearly, the reasons behind my non-existent collegiate dating life.
Click here to continue to the brilliance of  sanctioned water guns in our dorm
Click for Bray Index
Posted by Jeff McGinley at 11:00 AM

RSE had free pizza and would screen a Monty Python movie before Monday night football every week.
They bid me, stating they were impressed by how much I could pack in and that I knew so much of the dialogue.
Seemed legit shocked that I instantly declined

I had forgotten there were two TVs at that PBS thing. It made it hard for me to pay attention! Loved that diner, though! When they brought the second dessert for Tom, I thought his eyes were going to fall out of his head! As always -- I'm so glad you remember all this!

Scott, thanx for joining in! Didn't know that about RSE. Never entered that building. I do remember the poor pledges with the hose standing outside all night in the winter to make their ice rink. You made the right decision.


Jesse, thanx much. It was definitely a weird set up. We all kept saying "Tom...are you SURE? The desserts here are really big." Oh well, he learned eventually.