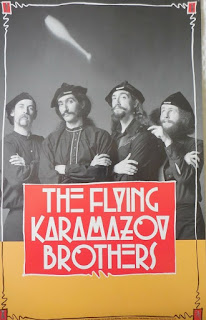 There were two moments in our college career where the RPI Juggling Club had contact with some of the greatest Jugglers of our time.  Woo!

The first was when the world-renowned Moscow Circus was playing the Knickerbocker arena in Albany.  Being poor college students, we could only afford the furthest seats in the whole place.

About a dozen of us sat with our backs against the upper wall, and no aisles between us, for there was no higher one could go in the Knick without sitting on the roof.  Sitting on the roof probably would have cost more, due to the better air quality.

The rest of the circus was fine, but we were waiting intently to witness the Russian Jugglers, trained since birth in their art.

They did not disappoint.

They also highlighted the difference between audience tricks and juggler tricks.

Their lone female member usually had point in their passing patterns, feeding clubs to the four men in the group in turn, and alternating timing and throws the whole time.

When each man did a forward roll and continued juggling on their back, our cheers could be heard above the rest of the applauding arena.

Then, the feeding lady did something astonishing.

She put one arm behind her back, and continued a four person variable feed with one hand.

NO ONE IN THE ARENA NOTICED!

No one, that is, except the group of lunatic college student jugglers up against the high back wall, who immediately stood up on their chairs screaming, clapping and hollering enough to draw the attention of our entire section.

There was one massively unpleasant side effect to this show.  All of us who attended were convinced we could learn how to juggle clubs while lying on our backs.  Some got it, but It took a great many introductions of our faces to the equipment to convince the rest of us otherwise.

There were only a few times time that level of injury surfaced in the club, and that includes the near constant combat juggling sessions.
Combat Juggling Definition- last one juggling wins, you can hit the other people's props but not the people. Jokes, insults, yelling like a nut and other distractions are all fair game and actively encouraged.   Occasionally this led to "who can juggle the longest with the lights out?" also leading to many injuries.  Ah, the joys of clueless youth.

The earliest damaging day came when the baseball team left their pitching machine set up in the padded and net lined ABC Room of the 87 Gym, also used for wrestling and juggling practice (not simultaneously).  We loaded it with tennis balls and tried to catch them into a juggling pattern as the dual roller fired them toward us at threatening velocity while we held two other tennis balls.  There were many a bruised forearm and I think only Mike, a local non-college student member with more experience performing than most of us combined was successful.

Another time was after we sponsored Remo Williams: The Adventure Begins.  Of course, there were insults that grew out of it, such as, “You juggle like a baboon with two club feet.”  More importantly, there was the day I tried juggling beanbags laying on my back while Jesse stood on my stomach.  I was able to maintain a stable pattern for quite a while, until Brian walked in, letting fire with a derisive chuckle followed by one of his trademark,
“You guys…are idiots.”
This caused me to laugh and almost die.

Around that same time, possibly inspired by the same reason, Jesse and I were chatting on the wooden floored, non-padded section of the room, where we kept the balance board. 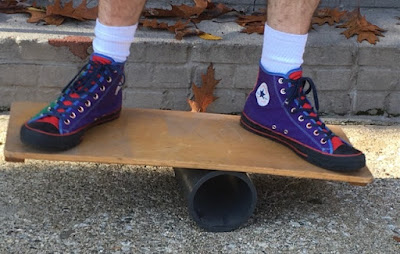 (Photo of my feet by Anabelle who informs me that "room and board" is not sufficient payment for her photography skills to allow me to leave off credit.)
A balance board is a piece of wood with stops on each end of the underside that sits on a large piece of PVC tubing acting as a roller. The top of the club board had instructions that led to a constantly repeated Juggling Club quote.  The instructions were close enough to these-
1) Place one foot on each side of the board with one end on the floor.
2) Push down on your raised foot.
3) BALANCE!
For some reason while we were standing there, we each put a foot on opposite sides of the balance board between us.  We felt it reach stability and stared at each other with wide-eyed excitement.  We then put one arm over the other’s shoulders, stepped our inside foot on the board making it evenly spaced on the roller.  At this point the entire club stopped practicing to see what we were doing.
We counted simultaneously, “one…two…THREE!” and hopped our other feet onto the board.
Based on eyewitness accounts, we were in perfect balance…

For nearly three hundredths of a second.

Then the board shot across the room as a lethal projectile in one direction, the pvc tube rolled at an unsafe speed into and up the opposite wall, and the two of us flew into the air, rotating until we were horizontally in parallel with both our ally in non-balancing and the floor.  After a hover about as brief as our balance, we crashed onto the basketball court like ground in an unceremonious pile. 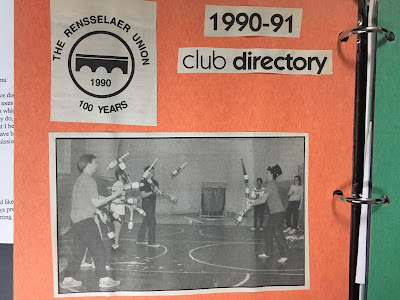 The second moment of fame brushing was with four of the originalish line up (four out of five anyway) of THE greatest theatrical juggling performers of the late 20th Century.  A team who knew how to combine outstanding skills, riotous comedy, and multiple other art forms (from Shakespeare to electronic music) with juggling.

The Flying Karamazov Brothers!
Jesse would complete the set, meeting and juggling with Randy Nelson when visiting Pixar years later.

Many of us had seen them live, and various videos of their shows.  We knew about “The Challenge.”

The audience was allowed to bring in items which “the Champ” (Ivan) would have to juggle.  The items were limited by rules of size, weight, and could not be a live animal or prevent the Champ from being a live animal.  The Champ was allowed three modifications and if he could juggle them for ten throws, he got a standing ovation. If not, he got a pie in the face.

We racked our brains in the weeks before the show, and tried a bunch of strange things.  We’d seen people bring in open quarts of ice cream, bags of dead frogs, oddly tied together shoes, and a freeze-dried octopus. We knew what worked, what didn’t and what was easily modified.

Finally, on the way to the performance we bought a supermarket made, extra flaky, blueberry pie and slit the tin  to allow dropping only the dessert itself on stage.

On top of the confection, we stuck a small note stating,
“With love, from the RPI Juggling Club.”

The show was as outstandingly impressive and funny as theirs always were.  When it came time for “The Challenge,” Jesse unveiled our pie, ran up the aisle of the theater, and deposited it on stage.

They read our note to the crowd and immediately recognized it as the most difficult item there, pretending to forget about it, not include it in the voting, and mistake our cries for it as some kind of local custom.

Sadly, the dichotomy between audience tricks and juggler tricks reared its ugly head once again.

No one else in the theater recognized how impossible it would be to keep our pie in a stable pattern and other more flashy, but ultimately far easier to control items won the crowd selection votes.

Still, for one shining moment, we knew that the leading performers in our field recognized us by shouting:
“It must be some form of local greeting…PIE!!  Pie everybody!”
We saw their epic show more than once, therefore, I'm not sure if the "pie" moments were in Albany or the time we went to Schenectady to see them at Union college.
Leaving that show was one of our epic moments.
We left Union college, located conveniently on the corner of Union and Union.  There was a long line of traffic waiting to turn left. Jesse suggested it would be faster to turn right.  It was faster, but in those pre-GPS days where reading the printed directions backwards never worked, we were quickly lost in a sketchier part of Schenectady.  I pulled the car into a gas station to ask for directions to the highway and the guy told us which way to go, including the confidence inflating line of:
"If the light is red there, run through it. Don't paddle your feet."
We went that way and things still didn't improve.  Brian then began calling out directions from the back seat that flawlessly got us onto the highway toward home.  I figured he WAS reversing the printed directions.
The joke was on me.
What we didn't realize until we reached that highway, was Brian got fed up with our continued foolishness (sense a theme here?) and was laying down in the back seat, yelling out random suggestions without once looking where we were going.
Miracles do happen.  Maybe Lisa was right after all?

I need to point out that loosening one shoe and kicking it into the other person's chest was legal at the time that I did it to you. It was only against the rules after the rule was made up after I did it

Addition to lights out combat and strobe light combat , I remember turbo combat. That was where we all held our breath.

I will swear this on a stack of Bibles until my dying day: whoever was on the bottom when the roller shot out from under the rollerbola, stayed horizontal in mid-air until the person above them crashed into them and then you crashed into the ground together. It was full-on cartoon physics

Scott, as always, many thanx for reading and being an important part of these memories.

A) The shoe flip was a totally brilliant combat move. It was only banned to keep those with less skill and pinpoint accuracy than you had from gravely injuring the rest of us.

B) I forgot to mention "holding your breath" combat. It's a good thing those floors and walls were padded. We combined it with lights out as well, I believe. It's a wonder no one ended up in the RPI infirmary.

C) That's exactly what that airborne moment felt like, but I always assumed some sort of relativistic effect was going on.