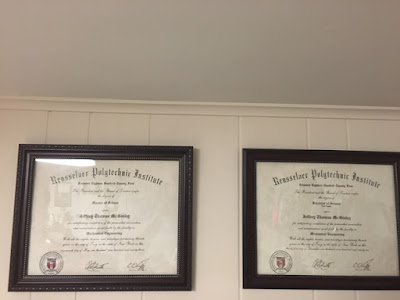 When Jesse and I first got to college, we realized that we would be the “Class of '92” like the Doctor said he was in the classic last Key to Time episode, 1979's “The Armageddon Factor.”   I finished all my requirements by December of 1991, but since: I knew I’d need a graduate degree eventually, the job market had dried up considerably while we were studying, and that kind of Galifreyan reference was too good to pass up, I filed all my papers to allow me to officially graduate with the class I'd entered RPI with in June of 1992.

I was already in the Mechanical Engineering Graduate Program, so I thought. (I’ll explain eventually, it’s worth the wait.)  However, that didn’t prevent me from taking place in our class’s proper ceremony, or the Senior Week that preceded it.

Once again, thanks to the previous generation mucking it up for us, alcohol consumption was drastically more controlled than the Senior Weeks of yore we heard of.  At every specific event, such as the picnic, we were all issued armbands allowing us no more than two beers during the duration of said event.

Senior Week was sponsored by Miller Genuine Draft, which became the third beer I gained a fondness for during my college life.  I did often choose Black Label for my six-pack on Mystery Science Theater nights, but miraculously, likely on unsupervised evenings in the forest, I had developed a taste for that discount brand well before college.

The other two beers I’d discovered at RPI were Bass Ale and Red Wolf- Budweiser’s answer to Killian’s Irish Red (It has been discontinued, but there is a close relative at Animal Kingdom.)  As far as I can tell, a British distributor came through Troy early in our RPI days.  Every single bar and restaurant Downtown in Troy had several bland domestic choices on tap, and Bass Ale.  Holmes and Watson was the exception, a groovy, literary Sherlock themed place with Fridays/ Applebee's style to the food, but better than any chain.  It still holds the record for the largest domestic and international beer list I've seen in my life.  Sadly, it closed after we left. I guess we went there a lot too.

The one exception to the armband rule was the “Booze Cruise.”  The school rented a three-floor Hudson Ferry Boat and unleashed the Senior Class on it. They got around the armband rule by charging for drinks. However, they were heavily subsidized. Beer was a dime or a quarter a cup if I remember right and mixed drinks were less than a dollar.

This may have lubricated some decisions for the evening.  Due to an inability to both talk to women, and more importantly, to dance at all, I avoided the level with the dance floor completely.  There was a Karaoke deck, which I would normally avoid as well. However, I had friends….and cheap drinks, let’s not forget that.

Randy wanted to sing, “Bust a Move,” but refused to do it alone. Jesse joined him, in spite of the minor handicap of not knowing the words.  There were sections where he made clicking noises with his tongue in time with the music while Randy rapped along.

Jesse’s thinking (if it can be called that) and the ability to purchase a Scotch and Soda for pocket change, led me to joining him on that deck for one of the reasons I’d join him in almost any endeavor throughout our history, from horror films to late night comedy, “It would be funny.”

He requested the Karaoke Master to play, Shirley Temple’s “On the Goodship Lollipop.” In spite of having horrifying flashbacks associated with that song, I was beside him on stage. The two of us puffed up as manly as was possible and sang along in as deep, gravelly and nasty sounding voices as we could.
We were cheered…

By our friends. Everyone else booed us a great deal.

Comedy can be incomprehensible sometimes.

On the bus ride back, Randy started singing a parody of Oscar’s “I Love Trash” which would get more development later in the week.  Most of us returned to our room to figuratively and/ or literally pass out for the night.

Brian went Downtown.  When I heard about this, I was stupefied.  At the time, I easily outweighed Brian by the factor of an oversized retriever. When we first convinced him to join up with the juggling club he became known as “The Lord of the Rings” years before that would be a cool reference. This was not only because he focused on learning tricks with those lesser utilized props, but also because at that age he could pass his entire body through one of them...
Leading to the obvious, “Now entering the ring,” jokes, of course.
Yet his alcohol tolerance left mine staggering about in his wake. He must have been somewhat affected, however. He related a story of ordering a drink at a bar, being told the price, pulling a handful of post Booze Cruise change out of his pocket, staring at it for a moment, sadly shaking his head and walking away.

Still he was fine the next morning and for festivities the rest of the week.

We weren’t sure if there would be a Senior Week “Laughter Hours.”  Knowing us, we should have been sure, but given the last minute acknowledgement it was a bit on the discombobulated side, even by our standards.  Still, it served as an excellent farewell. Fellow Seniors Randy and Brian were there for the sign off.  (Scott graduated a full year early, but would return for the next year's finale.) Randy finished writing his “I am Trashed” parody and sung it live on the air, with Jesse and I humming back up.  We started ad-libbing drunken noises and cheers, which bolstered Randy’s initially hesitant start, and by the last verse, he was totally going for it.

Brian chimed in often with his particular variety of wise commentary. It was somehow fitting that the final edition of Toothbrush Talk was live on the air.  I think he also encouraged us to throw in Vice Neil’s line from the end of the Motley Crue documentary I had on videotape into the final song set,
“I’m outta here, man!  SEE YA!”

I could hear the decision to continue Laughter Hours on my own become concrete listening through the recording of that show.

Jesse brought his sketch notebook with him, and combined many short ideas into a spoof of “After Dark- Your Club and Concert Connection,” the weekly listing of area upcoming shows and performances we read our first semester on the air.  Before his “Farewell Trio,” he made sure we got in a last track from the Uncle Floyd Show album.  Randy and Brian had never heard of the New Jersey staple that shaped Jesse’s young sense of humor. It was appropriate going out on introducing our friends to new comedy.  The “exposing others to our comic tastes” thing is something we both did before and after “Laughter Hours” and was a big part of why we wanted the radio show.

His ending songs were well chosen. Based on his lifelong fandom, our recent performances, and the fact that we had been watching Marx Brothers' films all week, the first of three was Groucho Marx singing,  “Hooray for Captain Spaulding” which features a large section based around- “Hello, I Must Be Going.”

The second song was “The Future’s So Bright, I Gotta Wear Shades,” by Timbuk 3.  The song was only six years old at the time, and fit in with the theme of the Senior Picnic that day where they gave us sunglasses.  He didn't include any of the three real musical groups he brought swaths of to the show-  They Might Be Giants, Talking Heads or Frank Zappa, but considering I used them frequently the next year, and kept listening to them on my own up to the present, their legacy was secured.

His final choice was not only one of the first songs we played, but an immensely fitting tribute, the Fool’s punk version of “I Won’t Grow Up” from Peter Pan.

We signed off the air for the last time as a team with a big explosion because Jesse always wanted to:
“You set your goals…and you go for ‘em!”

There were a couple of final Senior week activities and then it was time for the cap and gown walk.  There I was, already a semester into my Master’s degree, but I delayed this moment to graduate with my friends as the “Class of ’92.”  Both before and after me on the massive line in the RPI Field House were students from literally all over the world, many of them with last names appearing to be assembled by sneezing out a bowl of alphabet soup.  All of them were pronounced correctly.

When it was my turn to receive my diploma, the Dean announced “Jeffrey McKinley, Mechanical Engineering.”

There would be repercussions.

I can't believe how much you remember! Thanks for getting it down!

THanx for being a huge part of it. Hearing the shows again made a bunch of other memories cascade back.

I still have my diploma in the envelop in which it was mailed to me in Aug 91. I've taken it out 3 or 4 times to look at it.

You've lived with many more different walls than I have over the years. Maybe that's why. Thanx for joining in.