New Who Views: Everything Old is Who Again

Well, well.
This is an interesting turn of events. 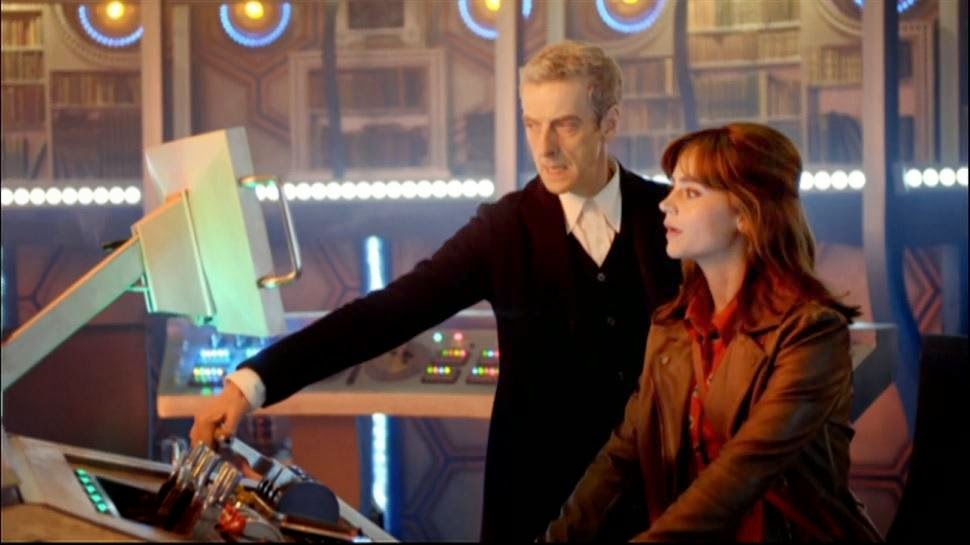 The Doctor is older than I am again.  YAY!
In fact, this Doctor’s actor is as old as any Doctor has ever been at the start of his run.
Although due to medical advancements, (and partially by design) Peter Capalidi’s current fifty-five appears quite a bit younger than William Hartnell’s did in 1963, it is one heck of a jump up from Matt Smith.
With a new Doctor, I feel like I should say a few words about it.

But I don’t need to because the Time Lord and the Paternoster Gang already did it for me.
Previous regenerations went back as a refresher to the step by step introduction into the “Whoniverse” that the series return began with.  This one was a little different.
The show has built up an enormous enough fan base that it didn’t need to return to the starting point. Instead Steven Moffat continued his steering of the series simultaneously in completely new directions and back to its roots.  (This includes the subtle changes to the opening theme and credits.) The Twelfth Doctor is very much a throwback to the classic years.
In this season premier he, and several friends, talked directly to the audience about why that’s going to be okay.
OK, technically they didn’t talk directly to the audience.
They talked to Clara who fulfilled the role of NuWho fan surrogate quite nicely.   I think I liked Clara better in this story than any previous one.  There was probably some “she’s not Amy and Rory” going on at the beginning but that’s not all it was.
She’s definitely more relatable as a standard companion than as a temporal anomaly.
Of course, since this is Doctor Who, standard means intelligent, strong willed, and perfectly willing to tell an ancient time travelling lunatic genius when he’s out of line.
I also felt the flirting between her and Matt Smith undermined a great deal of what they established as special about the relationship between the Doctor and River.
(Not to mention the Doctor and Idris.)
Clara reacted the way one would expect many fans that have only seen the new series and are used to, and probably very happy with, young attractive Doctors would.  The comments from Doctor Number Twelve, Madame Vastra, Jenny and Strax summed up the real core of what is worthwhile and likeable about the show.
More importantly, they all detailed how each of those elements in the show transcend the age and appearance of its star.
Well, maybe not Strax, but having him there served to detail there will be no drop in the levels of awesomecrazyfunweirdness that is the hallmark of the series.
Like everyone else, I started trying to point out where Peter Capaldi’s mannerisms resembled his predecessors in the role.  I could easily knock off a list from this single episode pointing to moments where he matched all earlier Doctors.
However, I stopped myself.
Because, deep down, I believe that exercise is possible with almost all of the Doctors, particularly the truly great ones.
The reason is simple:
They understand that it isn’t “All Thirteen” different characters, or even Thirteen different versions of a character.  The Doctor is truly one character that we’ve gotten to see Thirteen glimpses into without ever revealing the full truth.
I think we’re on the road to another “Truly Great One” myself.
Think about this:  Tennant was a lifelong fan and look how awesome his run was.
Capaldi’s got over twenty more years of lifelongness before taking on the role!
Anyone who hasn’t seen "Deep Breath” yet may wish to take a hike.
Or in the word of Professor River Song, sweeties:
SPOILERS!

I found the best explanation to the doubting Clara (and probably to a mass of young Whovians with no prior experience) came in a phone call from her “boyfriend” himself, the Eleventh Doctor.
I’m impressed they kept that appearance a surprise.  As nothing like that has happened before, it caught me completely off guard and added a large amount of impact to the exchange.
Having both Eleven and Twelve simultaneously identifying with the other slammed home the idea that, despite vast differences in appearance and style, they truly are the same man.
More importantly, it gave Clara a beautiful Good Bye scene with “her” Doctor.  In an earlier sweet surprise, Matt Smith’s Christmas ending was turned into an Amy moment, as it should have been.
However, that deprived “The Impossible Girl” of a final, tear inducing, farewell with Eleven all her own…
Should have known Steven Moffat wouldn’t give up any chance to get the McGinley house weeping at the screen again.
Also should have known he’d eventually bring back the clockwork men, since “Girl in the Fireplace” was his only episode before taking over that he hadn’t referenced yet.
Speaking of Moffat, and boyfriends:
Missy?!?!?
What the…?
Paradise?
Huh, buh, wha?
Could be Apalapuchia:  Did “Girl Who Waited” Amy survive?
Could be the Library Computer:  Is River jealous?
(And can we please get confirmation that Tasha Lem and the Papal Mainframe are really Professor Song and the Library Computer...come on, I know I'm not the only one thinking that.)
Could be a fragmented time stream: Are bits of Clara angry?
Could be a jettisoned TARDIS room:  Does Idris want “her thief” all to herself?
Something was said of “an old foe”:  Is Missy really The Master?
(The Missyter?)
Or his wife, imbued with power from his return, for that matter?
My daughter thinks it’s a young Madam Kovarian.

The Doctor-Donna regenerated?
Mercy Hartigan revived?
The thing from "Midnight" returned?
Heck, maybe I was right and she really is Mary Poppins!
Thanks to the nature of Doctor Who she can literally be anyone, anywhere from any time.
Man, do I love this show!
Fantastic!
Allons-y!
Geronimo!
Um…
“Just see me.”
Er…
“I don't think that I'm a hugging person..."
Nah…
“Oi! Big, sexy woman!”
I should stop.
Oh well, I’m sure his catch phrase will be something wonderful, and fitting.
Remember “Geronimo” came right at the start in “The Eleventh Hour.”
(That sentence actually makes sense. Man, do I love this show!)
But Allons-y took a while to congeal.
All right Mr. Show Runner Man, you’ve got us hooked again, and we’re hanging on tight for another wild ride.
Eye of Harmony to power, Time Rotor to Speed!
Posted by Jeff McGinley at 2:00 PM