At all different ages, I’ve hunted down books to open my mind.

In all that time, only one cracked it. 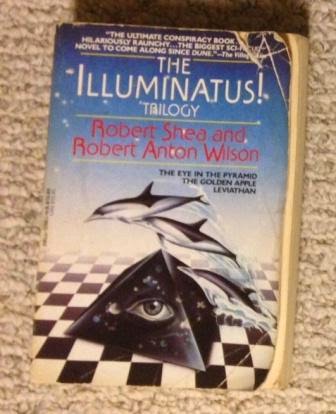 I read the book for the first time on a break from college, and scared the hell out of my parents because it left me wandering the house in a daze for most of the vacation.

Robert Shea and Robert Anton Wilson started with the premise that every lunatic conspiracy letter they received as editors of Playboy were true, tossed in a heap of their own libertarian beliefs, added a generous helping of sex, drugs and rock and roll and created a series of three novels first published in 1975.

It isn’t readily apparent upon first reading that the separation into three books makes any sense at all.

In fact, upon first reading the initial hundred pages don’t make any sense at all.

I don’t mean it’s hard to figure out details of the plot.

I don’t mean there are underlying mysteries to the characters that are troublesome to unwind.

I mean that for over a hundred pages, the reader has no idea what the flying farquardck is going on AT ALL.

The narration constantly and abruptly shifts between first and third person, and between multiple narrators.   There’s no warning or indication when changing from young to old, male to female, or the occasional squirrel or dolphin.  Many of the individuals are under the influence of mind altering substances, adding a painful twist to the package.

The reader is eventually rewarded for plying through the big pile of crazy with a great deal of bizarre humor, interesting views on free thinking and an entertainingly distorted look at history.

The book (books?) break the fourth wall in several impressive ways, including moral crusaders decrying the acts depicted, and yet to be depicted, in the story.  The most self-depreciating of those moments is a book review by a character that plays a larger role in Schrodinger’s Cat. 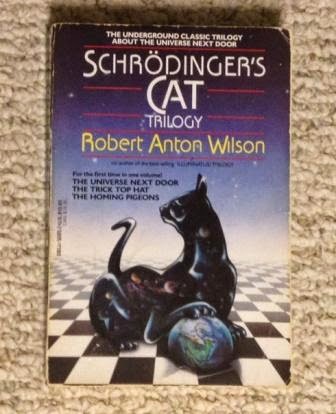 By the same authors, that trilogy deals with multiple parallel alternate universes, making it kind of a side-quel to Illuminatus.  It features many of the same characters, but altered (and constantly changing) versions of them.  It doesn’t so much recreate the world of the former trilogy, but instead provides various other windows into something similar.  It has cool ideas and good jokes as well.  Fans of the first should check it out if they haven’t had enough mental damage.

The review itself is a highly detailed and completely accurate scathing pan of the Illuminatus Trilogy itself.

True to the tenants of Discordianism, they are one of their own biggest targets.

Speaking of that religion masquerading as a joke, or perhaps the other way around: one of the most mind ripping items that came out of this mental adventure was finding how much of the ridiculousness was accurate.  Many of those whack-a-do theories had some pieces of fact in them.  The disturbing part was the true parts were often more whack-a-do than the made up stuff.

The Principia Discordia exists, and did before the trilogy.
It also predates the Flying Spaghetti Monster by decades and is a hoot and a half.

The law of fives, the POE and a bunch of other bits that seem invented for the novel also predate it.  Emperor Norton was a real guy, exactly as bizarre and awesome as described.

The first time I really got my brain around everything that happened in the story was when I read nearly the entire thing (700 pages of it) in a single night Up the Lake by the fire, assisted by several red solo cup refills of Southern Comfort.

After that experience, I could even follow the first hundred pages the next time through. Not only that, but the separation of the free form, often altered state, stream of consciousness narration into three distinct sections finally made sense. Not quite enough that I can explain it coherently yet, though.

Any attempt I ever make to describe this thing always falls short.  It’s not so much read as experienced.  It’s a mystery, it’s a spy thriller, it’s a historical science fiction Lovecraftian horror tale, and it’s a romance between an enormous mythological monstrosity and an obscenely named artificial intelligence - who may possibly be the author of the novel, which several of the characters know they’re living in.

The book presents many nifty ideas, and frames them in a way that makes them extremely appealing.  However, it then tends to deconstruct those same ideas and riddle them with holes shortly thereafter

Discordianism claims to truly believe in balance between the creative impulses of both order and disorder, but acts in more ways to support the latter because the world’s authority figures tend to bend reality towards the former.  Similarly much of Illuminatus is left leaning; however, the faults with the standard philosophies and practices of that side are also knocked down with regularity.

Between all the dirty jokes, mass confusion, and paranoid fantasies several valuable ideas are hidden.

The importance of independent thought is a key one, balanced by both compassion and logic. Granted the world presented is illogical, but the importance of accepting the obviously illogical through some semi-rational method comes up…sorta.  Like I said, it’s hard to explain.

Hagbard Celine said it best:
“Think for yourself, schmuck.”

Other ideas are presented in weird or offensive ways that can hide their value on first glance.

Celine’s “Never whistle while you’re pissing,” is a nonsensical and gross way to highlight the true benefits of giving a task one’s full focus and attention, without letting distractions get in the way.

Another lesson on perception is buried under an example most would find completely inapplicable to their lives.  When George Dorn gives him a hard time about his luxury car, and is told that as a well-dressed man in such a car, Hagbard explains he is never stopped by police and therefore can carry and deliver illegal drugs with ease.  Hippie looking Dorn admits to having stopped carrying anything remotely against the law in his tie dye looking VW mini-bus due to being pulled over constantly.

The bits about the number 23, and the Law of Fives, again originating in the Principia Discordia, are a marvelous illustration of the human mind’s ability to find patterns, particularly if it has to impose them itself.

From the Principia: "I find the Law of Fives to be more and more manifest the harder I look."

Illuminatus is more direct:  “All phenomena are directly or indirectly related to the number five, and this relationship can always be demonstrated, given enough ingenuity on the part of the demonstrator."

The book is immensely filled with references and gags.  A quote from Schrodinger’s Cat comes to mind when thinking about them all:

“If you don’t pay attention to every little detail, you miss most of the jokes.”

This is another reason to experience this novel.  The education provided by the myriad references to stuff that actually (sort of) happened.  It builds a large repertoire in the newly stretched mind for a large amount of fresh humor to be understood.

More importantly, it will create more people who will understand why I started screaming, “I can see them!” at the comics page one day several years ago.

My favorite bit of Discordianism the book not only illustrates but also named, as well as being an active participant in, is Operation Mindf*BEEP!*.

Me, I believe it’s akin to George Carlin’s “mental hot foot.”  Basically a way to keep people on their toes, open their minds a little and force them to question whether everything has to fit together in a perfectly rational and pattern matching way.

After all, I have been wearing a t-shirt with the meaningless four word name of this blog boldly emblazoned on it for years (and more recently a hat), giving random and inconsistent answers to, “What does that mean?” to every asker well before I started it, or read the Illuminatus.

My favorite part of this operation though is through the phrase coined in the book:  Bavarian Fire Drill.

The idea is that if you act with confidence and authority, people are automatically conditioned to follow you.

This is a family trend.  My Uncle Sal and his friend, while waiting on the boardwalk for their wives, talked enthusiastically about the fireworks show at nine PM whenever anyone passed by.

There was no fireworks show at nine PM, much to the disappointment of the massive crowd that they had managed to con into showing up at that pier by overhearing them.

It always helps to have an ally, and one of my best happened in tandem with a friend who was equally at home in the Bronx Zoo as I am.

As the group of us passed through the monkey house, one of the ladies noticed no fruit in the cage of the pygmy marmoset, like there was in all the other cages.  She said, "Hey, what do these guys eat?"

Note that the pygmy marmoset is the smallest monkey in the world, and an obviously harmless and cute little ball of vegetarian fluff..

I quickly cut off her incredulous, "What?" with,
"Oh yeah, they're known as the piranhas of the trees...a large troop can leap down from the branches and devour an entire cow in minutes."

We kept the banter going back and forth until the crowd that didn't know us was visibly backing away from the cage, and mothers were dragging their children off to other exhibits.