Who Needs Icons When You've Got a Talking Raccoon with a Machine Gun?

All along, the Marvel Films have been referring to themselves as being in “The Marvel Universe.”

However, that’s been a bit of an exaggeration. Though there have some Asgardian bits thrown in from the Thor side, it’s been an excessively Earth centric set of tales… 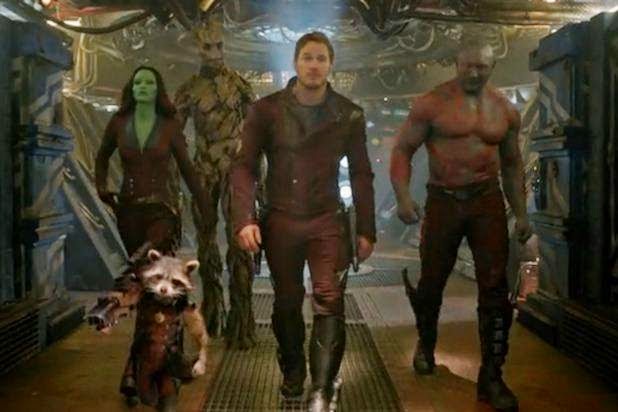 Guardians of the Galaxy opened the window to the true Marvel Universe, and dove through head first into the vast and varied universe it is.  It also opened to the biggest haul an August weekend at the movies  has ever seen.

Yeah, as expected, it was awesome, grab the family and go see it!

However, I was shocked that it was well above my already high expectations.

I think the biggest surprise the picture had was contrary to the dark and "realistic" take many super hero films choose these days.  It positively reveled in the idea that many parts of this vast and varied Marvel Universe are extremely silly.

Think about this:  Yondu wasn’t a part of the version of the Guardians that inspired this film.  Therefore, they retooled the character considerably.  The only parts they kept from the original were: blue skin, a red Mohawk, and the power to control arrows by whistling.  Not exactly the most grim and gritty of choices.

Not that the characters were silly, they were funny. There’s a subtle difference.  Because tragedy tends to be part of most comic book folk's origins, the Guardians all had their fair share.

And because Disney’s in the mix now, there was an opening scene that rivaled Finding Nemo on the tear jerker scale.

However, the tragic sides of their creation don’t haunt and weigh down their personalities continuously.  This is driven home fairly dramatically by that opening tragic moment transitioning directly into a man dancing across an alien world while using a nearby rat-lizard as a microphone to lip sync into.

This is a good place to point out how fantastic the music was, and how it somehow seamlessly blends impressive orchestra work, with terminally catchy Seventies hits, and somehow makes both perfectly fit with whatever's happening on screen.

The film functions fantastically as a comedy, but the Guardian’s painful pasts aren’t made light of.  Instead they serve to bond the characters together, and also to the audience.  What could have been the darkest individuals, the strong (personality wise and physically to the point of being ultra violent) Gamora, and the equally violent, and tortured by guilt Drax, come up with some of the greatest punch lines.  By highlighting what starts as confusion and disdain, but slowly grows into respect and acceptance for Starlord’s honorable slacker ways, the interactions become comedy gold.

The combinations also allows for a happy tearjerker moment at the end of the adventure that serves as the payoff for several items that weren’t the gags they first appeared to be.

The silliness didn’t apply to any of the villains, however. They were serious viable threats throughout.  It is very easy to see how they could evolve into the main antagonists that all of these Disney Marvel films are driving towards, as a direct and deadly counterpoint to Loki’s classy and charming form evil.

If I say anything else, I’ll start spoiling stuff, and it was filled with far too large a pile of multiple awesomenesses for me to do that.

But don’t forget to stay through the credits for the triumphant return of Marvel’s first movie star.

The critics and movie going masses that have propelled it to August box office record land are all correct.

Marvel already proved their genius by combining parts from the movies it already introduced everyone to into the mega entertaining and successful Avengers.

Now they’ve firmly established dominance by achieving an equally entertaining and on track for similar success adventure for a bunch of goofy space pirates that almost no one has heard of before.
I’ve never read a comic with these guys in it…and that’s saying something.

Not only that, but I think this film has the best chance of appeal to non comic book and sci fi fans of anything they’ve done. People are comparing the influence of a Raccoon and a Tree Man to Han and Chewie’s effect on my generation.  Disney Magic indeed!

After their hit or miss past, I think Sony and Fox should pay whatever admission fee the Mouse Empire demands to let their movies live in the same sandbox with the real cinematic Marvel Universe.

Then maybe Disney will have enough money to buy DC before Warner Brothers can screw up the Justice League movie.
Posted by Jeff McGinley at 2:00 PM