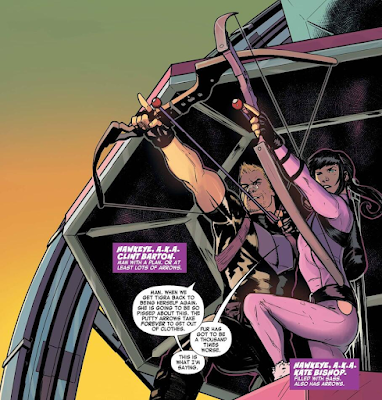 Back in my first Avengers reviews I mentioned that the West Coast franchise of that group was a gateway into comic collecting for me.  I also mentioned that Clint Barton was my favorite character.
What I didn't mention, as it didn't exist to mention at the time, is that Anabelle's favorite comic book character has been Kate Bishop since she first encountered her, inspiring her to go back and read the ENTIRE Young Avengers history. This could, unsurprisingly, be found in long boxes in my comic room, and now live in Anabelle's comic box.
Therefore the two of us were extremely thrilled when this show was announced, and also with the series itself.
More importantly, it went beyond appealing to rabid fans like ourselves.
My wife, Rosa, who ignored a couple other of the Marvel TV series, looked forward to, and paid full attention to every episode.
My sister, her family, and my, "I like the movies but will never read a Marvel comic" mother all enjoyed it as well.
This was a heck of a show.  At only six episodes, it had a quick pace with no padding.
There were multiple moments and decisions that brought Clint closer to the 616 Universe version of the comic book version of the character.
Kate Hawkeye (yes, they both use the name in comics) comes into her own as an less experienced, but talented crime fighter who earns a spot on the up and coming super-hero list.  I think with America Chavez in the announced Doctor Strange sequel, all we need is Teddy to do some deep cut Young Avengers / new West Coast Avengers stories.  Bring on JEFF THE LANDSHARK! WOO!
Spoilers follow, I'm too excited not to talk about it.
Clint and Kate get comic book accurate costumes, woo!
There are trick arrows all over the place!  And they are the really insane kind that makes the character fun, not just explosives and computer chips like we've seen before!
A bunch of public servants who LARP are made fun of a little, but are mostly shown to be staunch and useful helpers.
The "obvious" bad guy, (who is  "The Swordsman" from comics) turned out to be a red herring and an amusing ally.
The precedence for Kate's parents being villains was maintained in a surprising manner.
Echo's story came straight from the comics!  (That's Maya for the non-comic fans!)
To do that, they had to bring in Kingpin from the Netflix series! Donofrio continued to be amazing. It was the same week we saw Matt in a Spider-man film.  Seriously, my two favorite Marvel characters (Daredevil and Hawkeye) on screen only days apart. All I would have needed was a mention of a teleporting "fuzzy elf" for the hat trick.
While just as physically lethal as he is in the comics, and previous TV appearances, Kingpin was shown to be out of his league (and rightly so) when facing an Avenger.  For those that missed the Daredevil TV show (for shame) it established that Fisk's suits are specially made, armored material.
It tied up emotional loose ends from Black Widow and Endgame, and did so honestly and with effective closure. Much like Thor, Yelena isn't humorous in the comics, but due to fantastically funny actors, the interactions between her and Kate were brilliantly funny.
Bringing in Echo, who had close ties to the Ronin story in comics, to help close out that arc was a fantastic, worldbuilding choice as well..
Hawkeye gave his wife HER watch back, and it was a SHIELD logo that said 19! Shield Agent 19 was Mockingbird's original code name. I still haven't forgiven Byrne for splitting up Clint and Bobbi along with Wanda and Vision, but after the other series did nothing to help, this move clearly does.
Sorry, If I took longer to put this together it would be more coherent, but creating a live action version of my favorite character and my daughter's favorite character that we can share together AND brings the MCU closer to the comics we know was too much for me to wait on.
Lucky the Pizza Dog, woo!
I love the weird inside references that comic book fandom has given my family.  Anabelle watched the opening and closing with us, but was at college for the middle episodes. We didn't watch at the same time, and would text random non-spoiler phrases when each watched it.  One week we both sent the other two excited words:
FROZEN PEAS!!!!!!!!!
Posted by Jeff McGinley at 11:00 AM

The whole show was fantastic. We all loved it. The scene in the last episode with Clint and Kate discussing what defines a hero is my all time favorite MCU scene so far from any movie or show. (Except for maybe the final episode credit scene. But for very different reasons obviously)

Marvel and Star Wars took a long time to become a Daddy daughter thing for Vic and I but glad it did over the last few years.. We also thought this series was very good and thoroughly enjoyed it.. Loved the humor between Yelena and Kate..... We are both biting at the bit and looking forward to the next chapter in the MCU (after Spiderman NWH as we saw that last week.....

Kim- Yeah they captured the Clint as mentor idea really well. Both characters are in a very different place than they were in the comics but it all clicked. and oh man that scene was a hoot and a half.

Jerry- Comics became a stronger Daddy/ Daughter thing (because me) than Star Wars, but that's there as well. But its more generational. Rebels and Rogue One are Anabelle's Star Wars more than others. Yes, I love the way they've let the comic potential of the actors out when it is there. If they'd figured that out with Hemsworth earlier, Thor films may have done better sooner. They can pretty much go anywhere now. I still find it hilarious watching the whole world connect to the insane story telling methods of comic books now.