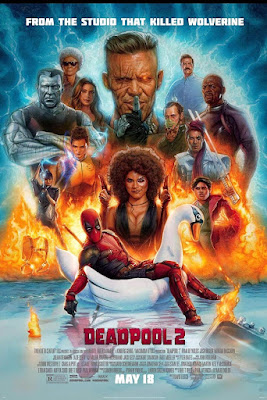 Deadpool 2
Knowing spoilers saved the film for me. If I didn’t know he unkilled Vanessa with the time travel end credits montage, I wouldn’t have enjoyed the movie the first time through, as their relationship was built so well.  The Deadpool films work because as goofy, violent and ridiculous as they are, all the emotions are real.
Man, that Logan music box and references were hilarious.
Similar to the first film, the opening scene was filled with details that were paid off later in the movie. However, it was a much darker reveal.
It’s hard to pick a favorite Yukio. They’re both great. I wish one of them had a different name, so we could have them both.
Yet another X-men dark future. This one is handled the way the comics usually do. We’re introduced to it, the characters fix it, and one or more individuals from that time line end up hanging about.
Cable illustrates how effective Deadpool’s snarking was at changing the tone of the film. He’s silent, or completely serious, and his scenes play like a straight, tragic action movie.
Deadpool films are now 100% in continuity with the X-films. The music was played, the Dark Phoenix cast cameoed, and Juggernaut mentioned wearing his helmet to keep his wheelchair bound brother from controlling his mind.
Colossus really wants to help and elevate Wade. He’s seen Deadpool kill before, many times.  What sets the big shiny man off is when Wade kills after he’s been accepted as, and is representing the X-men.
I never caught the picture of Ruth Bader Ginsburg in the resume pile for X-force, that’s hilarious.
There are all kinds of Marvel characters with "luck" based powers. Technically, the Scarlett Witch falls under this as well. They did an amazing job displaying them with Domino.
Having the X-universe and the MCU separate had one positive effect. It makes very little sense in the comics to have all mutants hated, and many other heroes celebrated, especially when the general public doesn’t know everyone’s origins.  The separate universes work in that regard.  The MCU “mutants” Scarlet Witch and Quicksilver, weren’t mutants, they were created by an Infinity Stone...at least until the Fox purchase and Wandavision aired.  This may be the first X-film with non-mutants.  Juggernaut is in the mutant prison, so he is one unlike the comics. Cable appears as only a cyborg, but in the comics, as Jean's and Cyclops’s son, he has his mother’s mental abilities. Shatterstar however, is an alien…not a mutant.
And neither is Peter for that matter. Go get ‘em sugar bear!
Speaking of the Juggernaut, it was awesome to see him at full comic power. (Hysterical choral accompaniment non-withstanding.) It was a classic Juggernaut versus Colossus fight. Contrary to his battle with Angel, now Piotr is the faster one, while Cain is the stronger and more durable.  Ryan Reynolds, by letting this battle take center stage, showed he’s a real fan of the books.
Peter was the only one besides Domino that made a smooth landing with his chute. He’s also the only one of the team Deadpool saved with time travel. Coincidence? 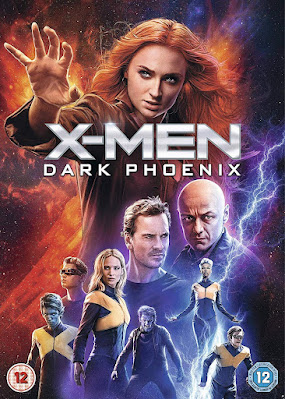 Dark Phoenix
This last entry of X-bits may be long, because I don’t remember anything about this film.  Hey, aliens, who knew?
The film dove straight into “Jean is an over emotional female who can’t control her powers.” Wow.
Way to contradict everything you set up in the last story.
The president has an X-phone. This means that, opposite to every other movie in the franchise before and after, the giant battle in Age of Apocalypse between one group of mutants trying to destroy the world and the other trying to save it has made the X-men look good in the eyes of the general public.
Raven and Beast are in their blue forms when they go out, but make themselves look human at home, where they are supposed to be teaching impressionable young mutants.  There is no logical in story reason for this.  At least Raven pays lip service to the fact that this, and the entire plot and set up, was completely irrational and contrived.
Over half a dozen film appearances and Cyclops is still useless. Maybe he’ll fare better in the MCU reboot.
This is a film set in the Nineties, the decade Jubilee was at her highest prominence.  She doesn’t even get a cameo appearance as she did in the other movies.  Instead, we got to see Dazzler, in her Seventies costume.  If they weren’t in the woods, I bet she’d have been on roller skates.
Thanks to the actor wanting to leave the role, Mystique has a completely avoidable death. (Much like Tony Stark in Endgame.) Except instead of a heroic sacrifice, it’s coupled with Jean’s origin story to make her unredeemable.  Even though the Phoenix Force was external; it was only a power source, not a personality changing living entity.  All the attacks and issues came from her lack of control.  Honestly, it’s as if they picked all the worst parts of the previous attempt at this story, Last Stand, and said, “Let’s be sure to do that again.”  Why not have her fight off possession by her own force of will, and then be the “big gun” again.  Seeing her leading the fight against the alien invaders would have been much more satisfying than falling back on the “out of control emotional woman” idea once more.
With this cast, there were inevitably still some good moments.  Hank calling Professor X out for being a manipulative jerk was a prime one.  Erik dressing down Charles was also well done.
Hey, Magneto founded Genosha, the independent mutant state. That would have been a much better story, and a perfect capstone to Erik’s ark.  Instead, it’s a side note where Jean comes to ask how to control her frail womanness and then goes full on supervillain for no visible reason.
Scott stepped up a little. We saw a bit of him taking point. Cyclops even got to be the wieldier of the F-bomb this time out.  It was a good effort, up until all the X-men and Genosha residents acted as dumb as possible outside Central Park to assure mutants would look bad.
In what would have been a great climactic moment from Jean to show her control of power by vanquishing the evil alien, instead she needed to be rescued by “her boys” Scott and Charles.
Praise where it is due-  Storm and Beast fighting on the train was an outstanding showing for both of them  This was followed by Nightcrawler’s murderous rage, something that SHOULD NEVER HAPPEN.  Seriously, in this respect, he is like Superman - where his powers could make it extremely easy for him to use lethal force. (As showed by Azazel in First Class) However, what makes him a superhero is that he would NEVER take that path.  I have yet to see comic book Nightcrawler done correctly in any other medium. The ball is in your court MCU, don’t screw him up.
Jean finally waking up to take out the aliens is sort of what I suggested above, though her look of total sadistic glee takes away from it being a heroic moment.  Then the main villain, what’s-her-face, states that emotions make Jean weak. Jean counters that they make her strong before killing again, and running away from Earth.  Jean’s argument would be easier to believe if it didn’t’ contradict the ENTIRE PLOT of the movie we just watched.
The film ended with a crapload of people dead in ways that could easily be blamed on mutants, after many of those mutants used their powers in terrifying and destructive ways out in the open in Manhattan. Cyclops was still useless and became more traumatized. Beast, who preferred to be alone in his lab as much as possible and was grieving his love, inherited the head master role.  Nevertheless, Erik and Charles, go ahead and have your European sidewalk café happy ending that you stole from Bruce and Selina in Dark Knight Rises, I'm sure everyone else will be fine.
I realize New Mutants should go here, but the one time I tried to watch it, I got bored and annnoyed ten minutes in and watched the new Mortal Kombat for the second time in twenty-four hours.
Click here for IndeX-men
Posted by Jeff McGinley at 11:00 AM

“ Having the X-universe and the MCU separate had one positive effect. It makes very little sense in the comics to have all mutants hated, and many other heroes celebrated, especially when the general public doesn’t know everyone’s origins”

This is an excellent point which had not occurred to me

Thank you. It's nice to know after a life time of reading this stuff, I make the occasional good point.