My hat is back, and what’s left of the shirt and Converse sneakers I’ve worn to every Batman preview for over two decades was busted out yet again. 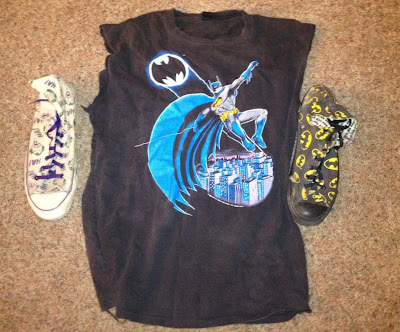 This made my (and my sister’s) outfit older than a large percentage of people at the midnight show. (Yes, mom was there too, we're a strange but fun family.)

Here’s the review (Spoilers for the first two Nolan films, generic comments on the new one.)

Christopher Nolan’s films have been the best and truest adaptation of the comic book character at the time they were released of any Batman films ever made.

Batman: Mask of the Phantasm holds that honor by building off the already fantastic Batman the Animated Series.

Christopher Nolan’s films have been the best and truest adaptation of the comic book character at the time they were released of any LIVE ACTION Batman films ever made.

I still say Batman (1966) holds that honor by accurately recreating the insanity of 1960’s comics done in the TV series, and then taking everything up a notch.

Batman Begins had a truly novel approach, untried in any live action modern theatrical film about the caped crusader.  It was a movie about ...
The previous generation had Bat-films that were all really vehicles for the starring bad guy, with Batman himself ducked back in the shadows most of the time.  Little brooding flashbacks detailed bits of why he put on pointy eared armored pajamas and hit people, but mostly, it was all about the wacky villain du jour.

The first Nolan Film had both Scarecrow and Ra’s al Ghul, but the main focus was on the new Untold Legend of the Batman. While it has become standard fare to make fun of Christian Bale’s Bat-voice, he did an excellent job playing all three roles required:

Batman
The Real Bruce Wayne
The Playboy Bruce pretends to be

Granted the whole, “I won’t kill you but I don’t have to save you” thing had me ranting for months, but I’m feeling much better now.

Allowances were made, and extra help was provided by the supporting cast for Nolan’s “realistic” take on Batman. Having that help come from the likes of Morgan Freeman, Michael Caine, and Gary Oldman immeasurably raised the quality bar for these films and helped define that this was a fixed length tale of the Dark Knight Detective.  Even Katie Holmes helped - because without Batman’s thought balloons, having his conscience personified made more sense than talking to himself for two hours.

Making it finite also avoided the problem for a realistic film that,  in his comic book version, Batman is effectively the least realistic of all super heroes.  Any regular guy, even a billionaire, trying to do everything old Brucie does without some magic, radioactive mutation or alien super science, would end up jailed, insane, dead, or most probably some combination of all three.

That minor point aside, Batman Begins managed to capture the flavor of the modern darker Batman mythology, set in a world relatable to non-comic geek movie goers.

The Dark Knight continued the story and character development of Bruce Wayne (and gave Batman the long lost ability to turn his head) while returning to the villains as headline format…but what villains.  The Harvey Dent story alone was compelling. His death at the end, while impossible in the serialized fiction world of comics, worked in this encapsulated trilogy.  It put a finish on his tale, and with Rachel, a mark on Bruce that was a permanent failure, rather than the never ending tragic and unattainable hope for redemption in the comics.

Then there was Ledger’s Joker – Though I doubt anyone will ever capture the Joker the way Mark Hamill’s voice acting has, Ledger came pretty close as a mix of the post Alan Moore Killing Joke insane theatricality of the clown prince of crime with the original 1940 Finger-Robinson creepy schemer, placed in a brutally realistic setting.  I nearly had to be restrained in my seat when he started spouting about his abused childhood… 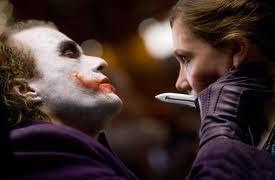 and I also needed to be restrained, this time from a personal standing ovation, when his origin story changed every time he told it.

Again the biggest difference between the Nolan films and the Batman comics is that these movies have been staged from the beginning as a story which will end after three parts, with the Dark Knight Rises as the final chapter.

The latest movie was consistent in quality and tone to the previous two films, once again replacing super-powers or unbelievable skills with networks of competent allies on both sides of the law.

The story, as the other Nolan films, contained elements of a several famous Batman comics.  To prevent possible spoilers to nerds who’ve read them as many times as I have they are listed below in black. (Cheated myself out of a few surprises because I recognized plot threads…curse you geek knowledge.) However, like the other movies, even though it used the comics as ideas, or even storyboards, there were enough changes and twists to throw a few surprises in.  Highlight the area to read them if you wish:

Launching into one of my patented comic geek rants for this film would be pointless.

OK…would be MORE pointless than usual.

The Nolanverse has been established over two previous installments, and any discrepancies with the source material are to make events and characters fit better into the established storyline.

Therefore, instead of focusing on changes, I’ll point out the areas where the spirit, if not the details of the characters matched what we geeks have come to expect.

Alfred and Commissioner Gordon were AWESOME!  This important portion of the Bat-mythos has been present in the previous chapters and continued to be held up particularly well in the finale.  These movies also added Lucius Fox to the awesomeness.  My guess is his awesomeocity will increase in the comic books as a result.

Likewise the ability of both Batman and Ra’s Al Ghul to have far reaching and influential effects on individuals well outside of their personal sphere of influence based purely on legend and reputation was also shown quite impressively.

Catwoman was properly ambiguous, clearly a criminal yet just as clearly drawn to Batman and his mission.  Anne Hathaway did a spectacular job of playing the always in control Selina Kyle, even when it meant pretending to be out of control. She was clearly Batman’s equal, but not as a straight female copy. Rather she displayed some areas where she wasn’t as good as Batman and others where she was clearly superior.  In other words, Anne Hathaway was perfect.

She was not, however, purrrrr-fect. That untouchable qualifier will only ever be reserved for Julie Newmar in my mind…and various other parts of my anatomy.

Then there was Bane.
I have a confession that learned comic fans aren’t supposed to admit. I’ve been a HUGE Bane fan since he premiered.  The idea of an evil version of Doc Savage - Man of Bronze, positioned as the anti-Batman really caught my attention. Doomsday was a plot device, but when done right (See Gail Simone’s Secret Six for a prime example) Bane can be a deeply complex character. He’s never been done correctly before in other media:  the Batman and Robin version was a waste, and even his appearances in the normally stellar Batman the Animated Series lacked much of what makes the character interesting. (Youg Justice is probably the closest they've come...why that universe wasn't the Nu52 instead of what they did, I'll never know.)  While many details and visual characteristics of Bane were changed from the original version in Dark Knight Rises the core of the character remained.  Bane was presented as a foe for both Batman and Bruce Wayne that provided a physical, psychological and financial threat at levels previously unseen in Gotham.

In summary - The Dark Knight Rises was a well-crafted, compelling and visually exciting film, which provided a clear and well thought ending to the Nolan Batman series, and I hope it makes boatloads of money to teach Hollywood that intelligent adult superhero films are worth it.

Having said that, I sincerely hope that the Avengers manages to make a couple trainloads MORE money than it does.

It’s not that I have anything against Bale’s farewell, I loved it. (And since he visited that hospital in Aurora, my respect for him goes way beyond his acting ability.)

Dark Knight Rises was a better film than Avengers, by most standards of evaluation.

However, I saw it once, it took a while to recover, and I’ll probably not watch it again until the home release.  I saw the Avengers in the theater three times WITH MY DAUGHTER (twice with my wife)– and each time we could have walked right back in after it ended and enjoyed it again.

I really would prefer that Hollywood learn they can make more money through well made, but also fun and entertaining for the whole family, type super-hero films, rather than overly dark adult ones.

Let’s be honest here, the state of Gotham, Bruce and Commissioner Gordon at the beginning of Dark Knight Rises indicates very clearly that the winner of the battle in The Dark Knight was the Joker.  (Adding extra remorse to Ledger’s untimely death…seeing the Joker celebrate his victory during the carnage of the latest film would have been EPIC!)

Lost the point for a minute there, but here it is:  as good as Ledger and the Nolan films in general were, that’s a harsh realization for a super hero movie.

These three Batman films were fantastic, intelligent and artistic, but they were very grown up. They may make tons of money, gain critical acclaim, and even Oscar recognition. However, I’ll betcha, when the Bat-Reboot films get ready to start up in a few years, the inside of the articles will talk about filling big shoes left by Nolan, but the headlines will all read:

“BIFF!  BAM! POW! BATMAN’S BACK”
Referencing a nearly fifty year old TV show that is reviled by many “serious” fans of the Bat.

And the reason for that is:
The 1966 Batman TV series made a strong impression on people when they were children and became part of their psyche.

You want to win over critics and make a successful film, you make adult dramas.

But if you want to make a deep impression on the cultural soul, it has to be fun for the kids too. 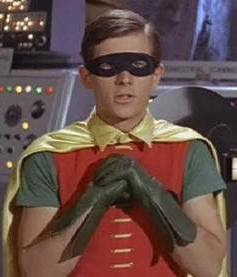 
Please mark comments with "SPOILERS" if they contain any, thanx!