She Wolf of London Through a "Kid's" Eyes 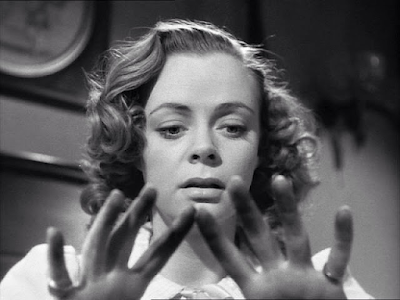 Hey, June Lockhart is in this one!
Maybe that's how she became Lassie's mom.
This is the only film in all five classic Universal Monsters' collections I didn't know a single thing about. The movie specifically states the time period is back at the turn of the century.
This means,
in relation to the other films...
Honestly I have no idea.
There's a Holmes and Watson vibe to the two police inspectors we meet at the beginning. However, the film doesn't really follow through on that.
It should have done more of that.
The story does go back to referencing old family curses and pagan legends for werewolf mythology instead of what Universal Movies had created before.
It should have done more of that too.
On the light on the balcony to ward off evil:
Rosa- That's a biiiiiiiiig lantern.
Me- - It's kerosene, there has to be room for the fuel.
(Thrilling commentary, no?)
On the film in general:
Rosa- "This is kind of...  boring."
Me- "Yeah, it's trying much more to be a Gothic Romance with suspense than an actual monster movie."
Rosa- "I want more wedgies and..."
*waves arms around dramatically*
"UUUuuuuuuuUUUUUUUuuuhhhhhh!"
On the "Watson" character later in the film:
Me- "He died?!?!
The funny, chubby, likeable guy was the only one in the movie who believed in werewolves."
On the film in general (Note: it has a run time of only an hour) yet again:
Rosa- "This is really boring. You never saw this?"
Me- "I never heard of it."
Rosa- "No one heard of it, it’s so boring."
On June Lockhart crying because she thinks she's killing people as a werewolf:
Rosa- "I’m crying too, of boredom." On Martha, the former housekeeper who still lives there:
Rosa- "I don't trust her."
Me- "You mean you don’t trust the creepy, manipulative lady with the questionable past?"
Rosa- "No, I don't."
On the Gothic, Rebecca like ending showing Martha was gaslighting June Lockhart and was the real killer:
Me- "So... There's no actual wolf in this."
Rosa- "Not even a 'wo'."
Me- "The original Wolf Man was supposed to be like this where you didn’t know if he was transforming or crazy. Luckily Universal said, 'Absolutely not, you need a monster in the monster movie'."
Rosa- "Yes, definitely."
Rosa- "From now on...
*Stares intently at me*
you have to know."
Click here for Universal Monsters Index
Posted by Jeff McGinley at 11:00 AM

I like movies where we don't know if there's a monster or if it's supernatural. Or I like them in theory. I don't actually know of one that is like this. At least I can't think of one at the top of my head.

I think Heredity would have been better left open-ended.

Sorry that the movie was boring. Although it did add extra comedy to your post.

Thank you.
Story of my life "at least it was a source of comedy material."

My favorite mysteries are not a "who done it" but a "what the heck is it" but this one telegraphed it from the start. So it was boring and obvious.

It's kept me writing...
Since grammar school if you look at some of the weird assignments I turned in back then.