Real Rocky in a Rocky Versus Real Redux 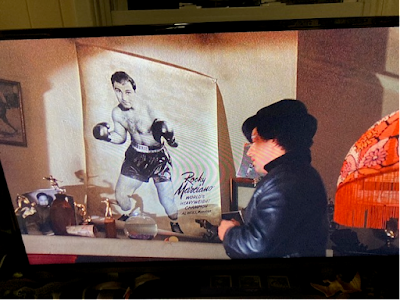 Confession time-
My weekend night video game relaxation has almost exclusively been playing Fight Night Champion for a long time.
Yes, open world games are more immersive, but they also take a lot more concentration and remembering what was going on, sometimes adding to stress instead of reducing it.
I've been reading books and websites on boxing, leading to saving up ideas for which match-ups to do on the weekend, then blowing off the week's steam on this game. That leads to wanting to read more books and websites on boxing the next week, and the cycle continues.
Like all modern (yes eleven years old is still modern by my standards) EA Sports games, knowing about the sport itself, and the individual athletes is not just helpful, but almost necessary. My general style is as an energy saving counter-puncher, but as the fight progresses, I'll use each boxer's signature style accordingly.
Way back when I first discovered Fight Night Champion, I ran an AI controlled tournament between boxers from the Rocky films, and their real life counterparts.
Two things have happened since then.
A) I've gotten much better at the game.
B) I read Rocky Marciano's biography.
For many weekends I had been playing as him in various historical, and "dream match up" fights.
After watching the Rocky movies again for inspiration when we got the new Elliptical Machine, I had some new ideas, and many new pains. The Elliptical must be working, because everything hurts now, not just my legs. My original plan was to insert Philadelphia's Smokin' Joe Frazier in all the matches from the films.
However, he doesn't have the option for "bare knuckles mode," which I needed for Rocky V. (More on that later.) Also, I haven't read his autobiography yet. When that happens I'm sure I'll be using him most weekends, and likely do this again.
With his prevalence in the movies, like last time, I decided on Marciano. This time, however, I controlled him in the ring against all of Balboa's opponents. I've gotten better at filming the "instant replay" option as well. Therefore, now there are knockout videos instead of still pictures.
Lets get ready to rumbbbbbbbbbbleeeee!
Rocky and Rocky II- Apollo Creed.
If "The Brockton Blockbuster" featured in the films instead of "The Italian Stallion" they would have been significantly shorter. Rocky Balboa was completely outclassed in the movies, but had indominable heart and stamina.  Marciano was the only Heavyweight Champion of the World to retire undefeated, based mostly upon peak conditioning giving him unstoppable drive and power. Wading though a hail of speedy jabs and combinations (blocking some, bouncing off others), Marciano's onslaught of historically damaging blows ended "The Master of Disaster" after only four rounds.

Rocky III -Clubber Lang
In the game, like the film. Clubber hits extremely hard, but gasses himself early in fights. Rocky withstood his ferocious hooks, and against Marciano's "Suzy-Q" right hand, he was no match, falling in two.
Clubber...you ain't so bad.
Rocky IV- Ivan Drago 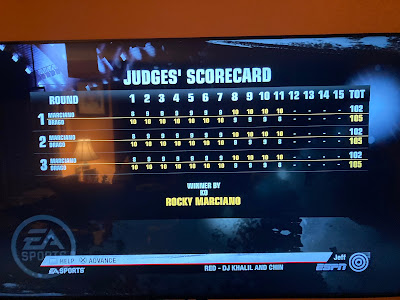 The winner of the first tournament, Drago is still the toughest opponent in the game. I clearly have no understanding of how the stats and AI settings work as even after looking at his and modeling other fighters on them, I am unable to duplicate his performance. He was completely unbeatable for a time, until falling to the maxed out middleweight we'll meet later. (Or, in fact, next week, because I can't control my output sometimes.) Oddly, once he lost that match, without any connection between exhibition bouts in the game, I was able to beat him with other fighters. It's like his little digital soul was damaged.
This was Marciano's hardest slog, just like Balboa's. Battered and bloodied, as he often was in his real fights, Marciano wore Drago down over time. He finally started winning rounds after losing seven by establishing an inside attack, and achieved a knock out in the twelfth.

Rocky V- Tommy "The Machine" Gunn
I didn't bother downloading Rocky Balboa's protégé, who turned on him, into the game. That is because the real life boxer who played him, Tommy "The Duke" Morrison, already was there. As I said, normally (given the game's mechanics) I fight conservatively, especially at the start, changing styles based on fighters when its time to press an advantage. Based on an early stunning blow, for this gloveless match (to simulate the street fight in the film) I went full out, using Marciano's well known, swarming, total assault method. It was the shortest fight I've ever played. (Once I figured the game out that is. There were some really short, unsuccessful matches early on.) If not the only, it was one of very few first round knockouts I've scored. Rocky's legendary power was in full evidence.
Aside- After watching what a jerk Tommy was in the movie, this was far more satisfying than a video game has any right to be. (No reflection intended on the real Tommy, who I used to root for and enjoy watching in my USA Tuesday Night Fight days.)

Rocky Balboa- Mason "The Line" Dixon
Just like in the movie, Dixon, the perceived "Paper Champion," earned respect in this bout. He was the overly cautious fighter this time, relying heavily on slipping punches and feints. While he was well behind on points, he did cut Marciano over the right eye early on, and withstood multiple flurries of Marciano's normally lethal hooks. He lasted longer than any other opponent with the exception of Drago, and was able to beat the count after getting knocked down in the fifth. After being dropped two more times in the sixth, however, the line was drawn.

Bonus bout A-
I felt bad leaving out Joe Frazier, since while it's very likely I will do this same exercise with him, it is not nearly as likely I will do another whole post about it.
What if Smokin' Joe could still see and his corner let him get up that last round in Manilla?
Honestly, no one could have expected either of those two men to do more that way.
Completely honestly, no one could have expected either of those two men to do what they did that day.
This is an older film of mine, allowing me to highlight my progress compared to the rest of the videos in this post, specifically about picture quality, compression and controlling replay speed.
Wow, that was terrible looking. How about a better (if slightly too fast) one?
Bonus Bout B-
Here's Smokin' Joe is after bobbing and weaving around, as well as shaking off many of, Iron Mike Tyson's power shots for nearly a half a dozen rounds, before demonstrating why his left hook was one of the most feared in the history of boxing.
For another Bonus bout, come back in two weeks,
because as usual, I over did it with something that was supposed to be a quick reference.
At least I'm consistant.
Posted by Jeff McGinley at 11:00 AM

Some of those were pretty beastly fights. I can't get over how quick Tyson punches. Must be impossible to defend/dodge those.

Thanx. Part of that is it's an older one, and I didn't get the replay speed right...but yeah.

Prime Tyson was something else. He was a combination of speed, power, combinations (and probably the key) intense training - giving him amazing defense movement and stamina.

I never played this one -- pretty cool!