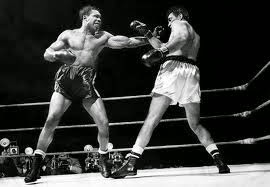 The first boxing matches I remember seeing were down in the basement with my Grandfather. Whenever they’d visit, we’d move the little TV down there to my Grandparents’ bedroom to allow him to watch “The Fights.” Being an old Italian from the Bronx in the time before political correctness existed; he would root for “the white guy.”

To clarify: he was watching said fights on Proto-Telemundo and Ur-Univision UHF stations in Spanish. The only way he could see any picture at all through the static was by running about twelve feet of tin foil off the antennae and across a nearby picture frame. Honestly, with that image and sound quality, “white guy” was more akin to the lighter shade of chess pieces being referred to as “white” than any racial delineation.

At some point in talking about boxing, Muhammad Ali needs to be mentioned. This is that time. He has been listed as the greatest athlete of all time, and with ESPN rating boxing the “most difficult sport in the world” in 2004, that fits. His mouth won him both supporters and detractors, but his personality and charisma cannot be denied. Well before I developed a full understanding of his sport, I knew enough about who he was to be upset when Leon Spinks took his title on February 19, 1978 and relieved upon his wining it back on September 15. When we had to do our puppet show book report based on a classic novel, that rivalry was my inspiration. I recreated the dramatic fight between Buck and Spitz from Jack London’s Call of the Wild as a boxing match between “Lion Stinks” and “Muhammad Dog-gi.” The fight was called by a human puppet with a clipped and nasally voice, How-Weird Co-Smell. (An impressive imitation for grammar school if I do say so myself.) 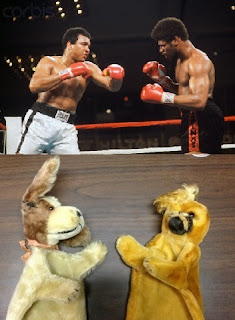 1) What’s the deal with Classic Novel puppet show book reports? Its thirty years later and my daughter just had to do one.
2) How the hell did I pass that assignment?
3) Isn’t it about time I stopped talking about dog puppets and got back on topic?

I learned a fair amount about the older boxers from my grandfather, mostly with my mom reminding him of bouts they saw together. He also taught me a bit about stance and form. Despite being in the European theater of World War Two the only fighting he ever openly discussed from over there was the time he decked another soldier during an abandoned barn bout, in retaliation for the jerk dipping Grandpa’s handkerchief in beer and sticking it back in his pocket during a game of pool.

I ended up learning the most from my father when I was older, though. Like most things, I was surprised at how much he knew. Not that it was surprising that Dad knew a lot, he just tended to keep quiet about things most of the time. It took ten years for him to tell Mom she wasn’t buying his favorite brand of tea. 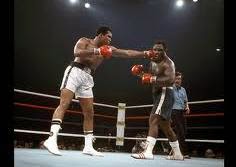 My education began in earnest when we watched the Rocky films. He commented that if real boxing matches looked like that, both fighters would be dead. He amended that assessment by saying the Thrilla in Manila really was that brutal, but neither Frazier nor Ali was ever the same afterwards. Buying him the video tape for his birthday one year allowed me to confirm his opinion.

He also pointed out some of Rocky Marciano’s fights reached that level, but usually only one sided. Before hearing it confirmed on another video purchase, I remember him telling me that some of Marciano’s punches, even gloved, sheared opponent’s teeth off at the gums. I can understand being impressed by that, because…damn! 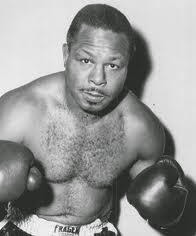 Interestingly, the fighter Dad talked the most about was Archie Moore. He was truly impressed by “The Old Mongoose,” not because of any single spectacular event, or flashy personal style, but his overall career. Even in defeat, he was never a push over, and younger fighters would have to “survive him” as a rite of passage. To put his time in the ring in perspective, when he started as a Light Heavyweight it was 1935, the year of the Max Bear-Jim J. Braddock Cinderella Man championship fight, and two years before Joe Louis would become champ. His near final fight, four decades later in 1963, was against a kid named “Clay” just before he’d take the title from Sonny Liston and shake things up by changing his name. Moore still holds the records for the longest reign as Light Heavyweight champion, and the most knockouts in a career (131). He was rated the greatest Light Heavyweight of all time, the fourth best puncher overall, and was one of only two men to knock down Rocky Marciano. More importantly, he succeeded during an incredibly long term in a decidedly hazardous calling, maintained enough of his faculties to live another thirty five years running the "Any Boy Can" program reaching out to kids, and was the first professional boxer to inspire his daughter to follow him into that career path.

Actually, I probably learned a lot more about my Dad than I did about boxing based on his opinion of Archie Moore. 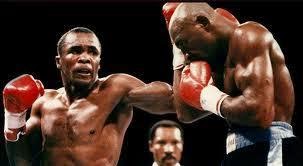 There were multiple fights he increased my knowledge base during; one was the April 6, 1987 Hagler-Leonard match up on HBO. The hype was constant, and I was kinda disappointed that it ended up ending in a decision rather than by knock out. That set the stage for him explaining to me the differences between speed, power, styles and expectations for the different weight classes, and also how the scoring system worked.

The most important thing I learned from him related to boxing happened in our kitchen.  I was a teenager, and already significantly taller than him.  I was performing the standard right of passage, "Now I'm bigger than you," phony sparring with Dad.  Following a couple tapping jabs each, he threw a hook and I cleanly ducked under it...

That is, I would have cleanly ducked under it if he was aiming at my head.  Since he was my father he was aiming at my shoulder, meaning I ducked INTO the punch, caught it square on the jaw, and proceeded to bounce off the refrigerator.  The lesson was:
"Don't try to out think your old man." 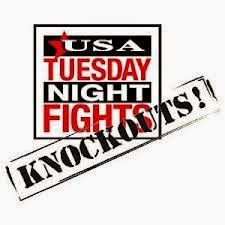 His other lessons helped me to better appreciate the full range of boxing I was exposed to during the stretch of time I watched USA’s Tuesday Night Fights. I found it in the mid Ninety’s, well after it started in 1982, and followed it on a semi regular basis until it ended in 1998.

The Heavyweights were always my favorite, but the cross section of rebroadcast pay-per-view, and non-title fights provided an interesting mix. Thanks to Dad’s lessons, I could better appreciate the performances of Duran, De La Hoya and Camacho, among others. It worked out really well considering the mix of scandal and self-destruction that plagued the heavyweight division during those years.

There were also some weird anomalies. Since lower level, four round matches were a large part of the programming mix, Butterbean, self-proclaimed “King of the Four Rounders,” made quite a few appearances. To realize what a bizarre proclamation that is, think about how many hall of fame quarterbacks are known for being ahead after the first quarter, compared to how many are known for game winning two minute drills. 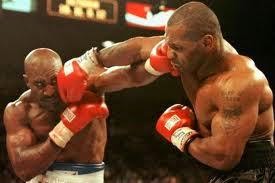 I was never enough of a fan to consider any Pay Per View, and catching the Tuesday reruns was fine with me. Although seeing Holyfield whup up on Mike Tyson on November 9, 1996 at a family gathering was a great bonding moment. Pity the sequel turned into an unpleasant act of cannibalism.

There were a couple of up and coming heavyweights that I believed I had “discovered” on USA and would be able to follow to HBO or Showtime as their abilities bloomed. 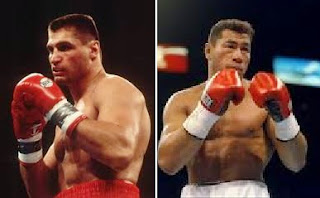 I’m never going to make a career out of being a boxing talent scout.

Andrew Golota “The Powerful Pole” was a big blonde monster that looked like Ivan Drago come to life. He was destroying all of his opponents on Tuesday nights, and I was naïve enough to believe his claim that making a snack out of Samson Po’uha on May 16, 1995 was an accident. I watched him live on premium cable when a riot erupted in July of 1996 when he chose to ignore his power and skills, and instead used Riddick Bowe’s jujubes as his personal speed bag. The rematch in December ended the same way, but amazingly without the riot. We didn’t have that channel, but I listened to it with the image scrambled. Even green and wavy I could see Bowe’s grimace. Golota’s career meandered around a bit, with more “I quit”s than someone who beats people up for a living should have.

Looking even more impressive than Golota was “The Thunda from Down Unda.” I saw Jimmy Thunder’s March 18, 1997 one and a half second single punch knockout of Grimsley that still stands as the fastest ever. He rose to…um…slightly better than mediocre, gaining some regional titles and couple of belts (the lesser IBO and WBF) along the way. He retired in 2002 with a 35 and 14 record.


The one fight I remember my dad being very happy with the outcome of was 45 year old George Forman’s tenth round knockout title victory over Michael Moorer on November 5, 1994. 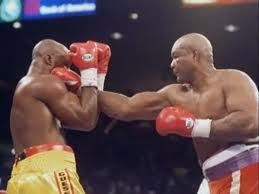 Some people believe the fight was fixed because Moorer led on points so heavily.

However, that leaves out some important details:

A) Moorer’s corner admitted he didn’t train well, ten rounds of boxing, even when you’re winning, is incredibly tiring.

B) Foreman’s straight right, while lacking snap, was strong enough to split Moorer’s lip and or mouth guard…or the roof of his mouth…or the roof of his home? I’m not really sure, boxing reporting tends to be a bit sketchy, but something was definitely split.

C) In a quote from Diggstown, my all-time favorite boxing movie, which I’d like to insure members of my family, I did not forget, I’m just saving it for a sequel post:
"This is a man who knocks people unconscious with a single blow. I consider any such man extremely dangerous, even at 48 years old." (Or 45 in this case.)

I truly understand Dad’s joy at an “old guy win” as I grow older myself.

Heck, that gives me two more years that I could still turn pro!

Or maybe (he said tossing in a segue to a future post) I’ll just stick to boxing video games.
Posted by Jeff McGinley at 2:00 PM