As a fan of boxing with little to none of the genetic requirements to be skilled or aggressive enough to pursue it myself, using video games has always been the main available substitute. 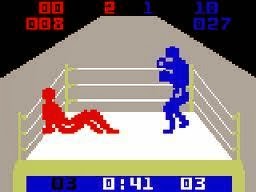 Intellivision boxing, on the more advanced sports home console at the time, provided a choice of a whopping six boxers.

1) Blue: Defensive – allowed you to take a couple more punches before being knocked down by a barely injured opponent because of your own weak punching ability.

2) Red: Offensive – allowed you to deliver more powerful punches before being knocked down by an injured opponent because of your own weak blocking ability.

3) Tan: Endurance – allowed you to win, because you were able to soak up more red punches, or wear down the blue defense over time.

4) Light Green – Medium everything – allowed you to fight #5 on equal terms.

5) Dark Green – Medium everything – allowed you to fight #4 on equal terms.

6) Yellow – Random – allowed you to lose. The randomization seemed to consist of alternating between, “mostly sucks” and “completely sucks.”

Four and Five were the most important because as horrifying as the graphics were kids, there was a more terrifying aspect to the game. NO SINGLE PLAYER OPTION. Yes, in order to play this game at all, you had to actually find a fellow human being and then SIT NEXT TO THEM, because the controllers were tethered down and the internet didn’t exist.

In my case, I had to talk my sister into a game that she usually couldn’t win and was based on a sport she didn’t like. Believe me; the most challenging contest was completed long before the Intellivision ever got turned on. 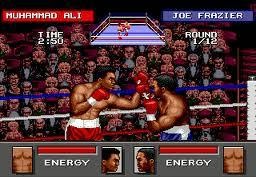 The next level of boxing cartridge I dove into was Greatest Heavyweights for the Sega genesis. There was a big step forward in graphics allowing the people to be identifiable as human. The game came with about forty fighters, a majority made up, but eight actual Heavyweight champions. (Nine if you count “Mike Dixon” filling in for a scandalized individual whose image and name got pulled at the last minute.) There were a few visual cheats to add depth, but the game was still primarily two dimensional. Features were differentiation between head and body damage, and also varied fighter heights and speeds. One of two big additions was allowing the creation of a custom boxer, using stock faces, hair and body types, to allow a “campaign mode.” (In memory of Intellivision, I often picked odd skin hues, blue, green, red, etc.) More importantly, a single player option was available, freeing my sister from the need to ever play. The intensity of the sport was captured fairly well. The proof being that Greatest Heavyweights was one of only two games my sister could tell I was playing while safely listening from her own room, like so:

Now technology has advanced by leaps and bounds supplying Fight Night Champion to fill the need I had forgotten about until finishing Dad’s book and once again remembering I was a boxing fan.

The game is insane.  I had to double check pictures to tell the difference between it and real life. 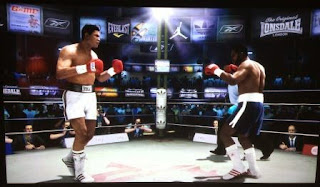 There are twenty one locations, all based on real places, ranging from local gyms, up through fight clubs, and full out arenas. The fancier ones have full commentary during the fights.
There are multiple weight classes of boxers all containing representatives from several eras. The Heavyweight champions of the seventies are there, along with the eighties Middleweight Vegas stars, and multiple other classed champs from many ages. There’s over fifty boxers in all, not counting the download content “Legends Pack,” which throws in another five Heavyweight champions from the twenties to the fifties, and a whole new bare knuckle mode of play.

Oddly a fair amount of boxers would not release their likeness to be in the bare knuckle game version because of the damage it would show. However, the regular game allows adjustment of a damage modifier, making them look just as bad. I guess the “professional boxing agent” and “computer savvy” Venn Diagram has minimal overlap.

Unlike some other games with more detailed art engines that require you to “draw” all your own extra characters, this one has an online location for uploading and downloading. Being a completest geek, whether it is comic books or sports simulations, as soon as I loaded the game and installed the extras and patches, I went hunting.

I should probably issue a warning to readers unfamiliar with my “old guy game guides.” There won’t be anything here about “Champion Mode,” a storyline portion of the game that’s basically an original boxing film. There also won’t be anything about “Legacy Mode” where you build a boxer and take him through his career.

No, this old guy is going to start off praising the one fantastic improvement that lets a gamer with almost no skill obtain hours of enjoyment. Intellivision was only two players, Sega added one player, but PlayStation 3 gives the ultimate in Old Guy Game convenience…

That’s right, set it for zero users, pick two fighters you’ve always wanted to see go at it in the venue of your choice with fabulous graphics, sound and AI provided for you. Then grab a glass of wine, and its Fight Night, baby! 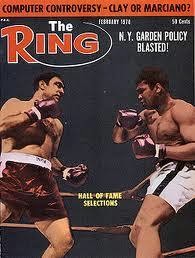 Back on January 20, 1970, Superfight was released. It was a film of specially choreographed moves, edited together based on the predictions of a massive computer of the time of who would win a fight between Rocky Marciano and Muhammad Ali in their primes. (It was Marciano by TKO in the eighth. Ali believed the “computer was from Mississippi.”) This real event was inspired by an earlier, audio only radio version, and itself inspired the plot of Rocky Balboa.

Now that technology is available, and surpassed in my living room.
My results were pretty close. Marciano was actually knocked down in the third, and lost the first six rounds on points, but he rallied and scored a knock out in the ninth. 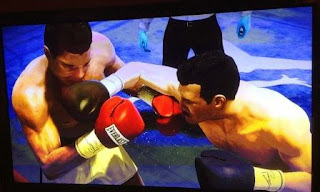 I went on line to get Archie Moore first of course, choosing him at the height of his Light Heavyweight title reign. That’s a somewhat underrepresented weight class anyway.


Next, due to his being a relative of one of the “Up the Lake Joes” who encouraged our youthful forays into forest boxing was Roland LaStarza. His first fight with Rocky Marciano, on March 24, 1950, ended in a controversial split decision that was the closest Marciano ever came to a loss.

Roland’s face looked slightly more accurate on screen than in my captured still, but his fighting style matched what I’d seen in old films pretty closely, and he was announced “From the Bronx” which always adds importance and strength to anything.

After spending six rounds cautiously blocking and counterpunching, he finally got his (computer based) knockout victory over the tired Marciano. 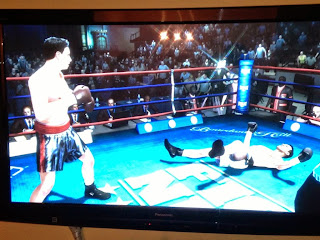 This highlights where some realism is lacking from the game. After surviving their initial match, LaStarza suffered bone and blood vessel damage to his arms, which I believe would have cut down on his punching strength considerably. It may also explain why he, and several others, was taken out much easier by Rocky Marciano in a rematch.

The quality and realistic-ish-ness of the game made me decide to stick to only boxers when looking for new characters. Even though the likes of Harry Potter and the Joker were some of the first created boxers I saw on line. Sometimes it helps to remember no matter how representative of the true sport a video game is, it’s the geeks that run the internet and its world. For example, TVTropes.org has, besides giant and extensive main pages, entire summary pages for every episode of both Doctor Who and Star Trek but only one main page for all six Rocky films combined. Also, this happens between every round. 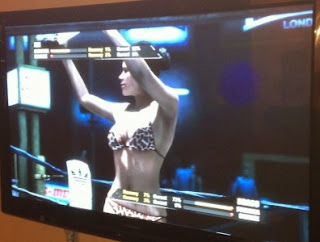 My next acquisitions were the Heavyweights I followed in my Tuesday Night Fight days, Thunder and Golota. I faced them against each other, and after several fairly dominant rounds, Thunder won with the application of one of his patented knockout punches. 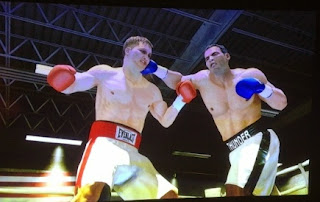 In an attempt to increase the reality of the simulation, I gave them a rematch. This time, I controlled Golota for the very opening of the fight to insure the application of a couple of his trademark punches: 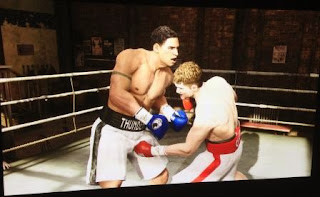 Golota did receive a warning and substantially lose the first round on points; he then found it much easier to defeat the visibly more susceptible to stunning blows Thunder a few rounds later.


While I decided to limit the game participants to real boxers, the characters from the Rocky movies are far too embedded in both national and pugilistic culture to leave out. There was a problem with this, however. Picking the boxers I happened to randomly admire and/or remember usually netted only a couple of options to sift through and find the most accurate. Trying to find the best one of characters that have personified the sport for decades required a full on scientific experiment.

Setting to No Players once again, to keep my own lack of ability from tainting the results, wine in hand the entertaining trials began.

Apollo Creed Vs. Muhammad Ali.
Creed was based on Ali. There’s a bit of Joe Louis in there too, and possibly some Sugar Ray Leonard. (Though how much of Leonard was based on Ali to begin with?) But it’s mostly all about “The Greatest.” Ali even admitted to Stallone or Weathers that he was sorry he didn’t think of the nickname “Master of Disaster” first. I made them fight each other and after a couple of early round knockdowns, it was the only fight I selected to go the full ten rounds and the only draw.
PASS!


Rocky Balboa Vs. Clubber Lang
Clubber lead at the start, but once he tired a little Balboa knocked him out cleanly with a barrage of hooks in the third, just like triumphant fanfare portion of Rocky III. Eye of the tiger, baby.
PASS!


Ivan Drago Vs. Middleweight Tommy “the Hitman” Hearns
There’s a method to my madness here. I wanted to test the big Russian against someone WAY faster than him. Sometimes gamers sacrifice too much speed to amp up the power on the big guys and it makes them useless.
“Hitman” led dramatically in points easily for a several rounds. Managing to duck, dance away from, and occasionally block most of Drago’s blows.
Then “The Siberian Express” threw a straight power punch that blew through Hearns’ upraised gloves, and hit him square in the face. Tommy dropped like a rag doll and it was the only knockout I’d seen in my observed matches where there was no attempt to, or chance of, getting up.
No count, nothing, just flat out immobile.
PASS!

Once I had confirmed I had picked the right ones, it was time for the tournament. (Coming soon) 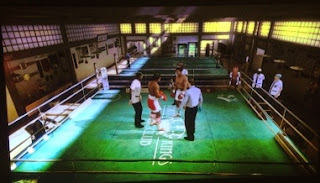