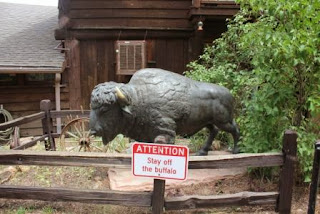 A leisurely breakfast was the order of the day after the exhausting travels of the previous night, before once again piling into the Impala. We still hadn’t named the car, Anabelle wanted “Batmobile” based on the color. However, since it got the shakes when braking downhill, and had problems finding its top gear on the highway, I felt it wasn’t worthy of that title.

Both these issues were explained away when we called the rental agent by, “Chevy’s do that.” Good to know next time we go car shopping. 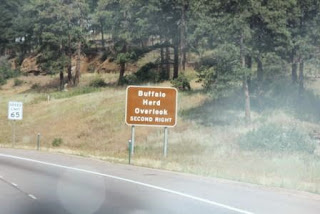 We drove out to the much drier and safer Interstate 70 again, pulled over on the west bound side to check the “Buffalo Overlook” and saw absolutely nothing in the field across the road. We had to continue down the highway for a bit before U-turning. On our way back on the east bound side we decided to pull over at the “Buffalo Overlook” because there was a parking lot on that side. We figured we might find some kind of sign or indication when the animals would be released. Instead, what we found was a large herd of the creatures, wandering around the same field we looked at from the west bound side. Apparently they were some kind of ninja stealth bison or something. 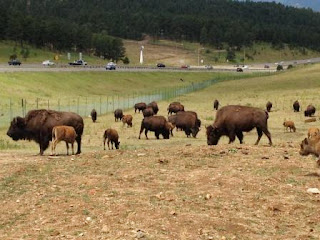 Along with Rosa snapping pictures with the Super Deluxe Magic Camera and me using the Smartphone, Anabelle decided to make sketches of things we saw as well, adding an artistic air to the day’s adventure.

After getting tired of the olfactory experience, but more importantly of answering my telling her to “smell the nature,” with “I did, it’s gross,” Anabelle was quite ready to leave. We climbed back into the still unnamed Impala, allowed the multiple GPS and directions to argue with each other about which of the three possible routes were correct, and made our way up Lookout Mountain to the Buffalo Bill Museum and Grave. 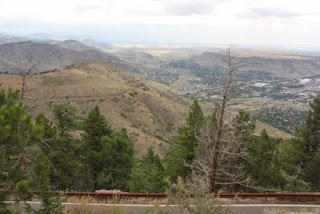 Experienced with the Colorado Afternoon Rain Phenomenon, we spent some time taking in the gorgeous views before entering the building. A sign stated four states could be seen from this vantage point. We knew Kansas was a straight shot eastwards, and that the mountains would block the western view of Nevada. North could be Wyoming, but New Mexico had to be too far south to see. LuzMaria and I guessed Nebraska bordered close enough to be seen next to Kansas but we were stuck on the fourth. We kept looking at maps and pictures as the day passed and trying to figure it out.

The museum itself was very cool. Originally founded by William Cody’s kinda sorta adopted son; it was filled with information and items that presented a detailed history of Buffalo Bill. A short film was narrated by the guy who charged us admission, a renowned expert on Mr. Cody’s exploits and author of several books. This was an unusual occurrence for us, as the ticket takers and curators of the New York museums we visit are not normally the same people. 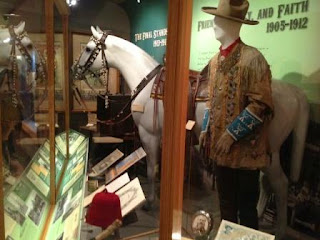 The collection and information was exceedingly in depth. It went out of its way to present that, despite his name and reputation, Bill Cody wasn’t really part of the wholesale bison slaughter and was an ally to the Native Americans. 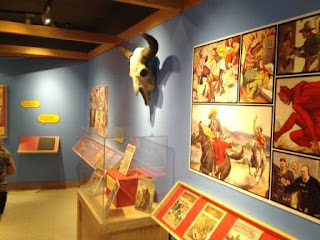 There was also a special exhibit about dime novels, comparing them to comic books and pointing out how Buffalo Bill was basically viewed as a superhero in his time through those publications. The place even had a little interactive section for the kids with a plastic horse to pose on. It was yet another deceptively full, highly nifty and informative little museum. 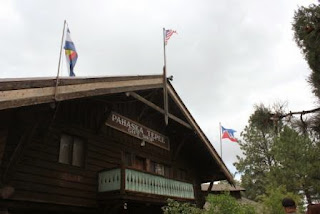 We had lunch next door in the Pahska Teepee, which was the original museum but now only houses the café and gift shop. I found out that signing for the rare buffalo burger the night before was an anomaly. The reason it was an anomaly is that no other place would even CONSIDER cooking a burger any way other than well done. Fortunately, my ever changingly health conscious taste buds recently added both beans and onions to the list of stuff we like, making their famous buffalo chili a viable and excessively tasty option. Anabelle agreed and began her career as the nefarious chili and cracker thief.

Full and happy, we spent a large chunk of time in the multi room, highly stocked gift shop. We managed to find souvenirs for almost everyone, as well as some cool stuff for ourselves. Anabelle looked at a couple things she liked, but wanted to buy a toy old west style revolver for herself. We talked a little and she ended up buying the other stuff and let her daddy buy her first toy gun…sorry, I’m getting a little misty, I need a break.

If I am correctly remembering the date of the Disney trip I first saw it on, I found a bighorn sheep belt buckle I had been looking over twenty years for. As its Anabelle’s favorite animal, we were both delighted. I questioned the woman who sold it to me about the four visible states. She confirmed Kansas and Nebraska, and also Wyoming which they count even though technically it is too far to really be seen. I asked what the fourth state was, and after staring at me long enough to determine that - yes I was exactly that stupid- she said: 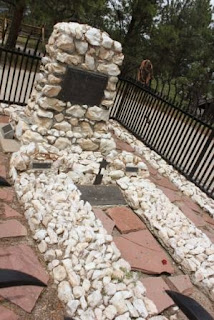 We squeezed in some final mountain view pictures, as well as ones of the grave itself before ducking into the Impala to avoid the expected afternoon thunderstorm. This one also came with lightning that mocked all of Rosa’s attempts to photograph it.

To stock up on the mass of fruits and vegetables all of our dieting styles require, we shopped at a Sunflower Market. The bill came out overly high, and upon checking we discovered that the celery was charged as a cord of firewood. As celery is one of the few vegetables I still find inedible, I can understand that mistake.

Upon loading the car in the downpour, I learned that I had yet again left my clubs in the car all day without posing for impressive view juggling pictures.

On the way home, we paused for a, and I quote, “quick run into Wal-Mart.” When Anabelle and I had been in the Impala for a half hour we decided:

A) To go into the store after them.
B) To not let the sisters go shopping alone again with us sitting in the car.

An excellent home cooked fish dinner followed by watching Captain America finished off the night for Anabelle. Once she was asleep Rosa and I performed our nightly photo downloading ritual. In addition, we finally hammered out the schedule for the rest of the trip. The often recommended drive up Mount Evans was not added to the list after Rosa saw the large amount of twists as the elevation climbed on the map.

Prepared for the rest of our stay, exhaustion claimed us once again.