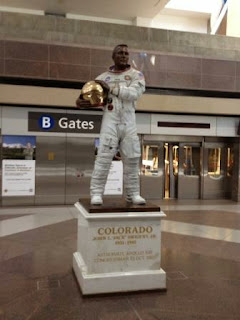 The final day of the longest continuous vacation I had taken in my adult life began with a cryptic message taped to our bedroom door. It probably would have been much less cryptic if I had been working harder on remembering Spanish. I got the general gist of it, but had to wait for Rosa for confirmation. There was much pathetic snuggling for most of the morning, alternating with my wife and daughter, until the volume of what was left to do forced us to awaken.

The message said that Titi LuzMa might not be able to get out of work to drive me to the airport, which meant we needed to add Atmobile driving lessons for Rosa to the events of the day. Amid the chaos of getting ready to leave, we were able to get a birthday message to my younger, and more technologically connected, cousin far easier than we got one to her dad.

I made Anabelle her requested grilled cheese sandwich for breakfast, but neither of us was very hungry. We spent much of the morning telling each other there was mail outside, and leaving little notes on the stoop. Yes we were both cute and pathetic at the same time. We went over “brave things” again, and she wanted me to hold her cardboard “Green Lantern” logo she used to remember to be brave to help me make it alone through the next two weeks. (EXTREMELY cute and pathetic.)

I was happy to learn that I didn’t really overdo “Leave me alone, I’m on vacation,” since my belt needed an extra hole to properly support the size of my new bighorn sheep belt buckle. Secure in that my drawers would stay drawn, Rosa’s Atmobile experience could begin. 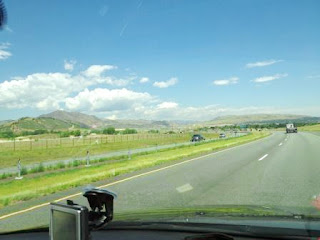 We immediately gained great respect for our spouse by switching roles. She was now driving an unfamiliar car around roadways she was unsure of, while I was trying to clearly state directions and take pictures from a moving vehicle. We both learned the other was much better suited to the tasks they had been doing up until that day. 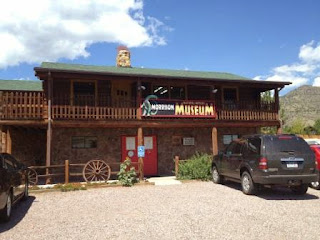 Our first stop on the tutorial drive was a return to the Morrison Museum. Even though the designs were on the dull side, the place and its volunteers had generated enough respect and admiration in me that I needed one of their t-shirts. We also bought Anabelle an awesome set of plastic dinosaur skulls that Safari (the current manufacturer of Carnegie Dinosaurs) put out. 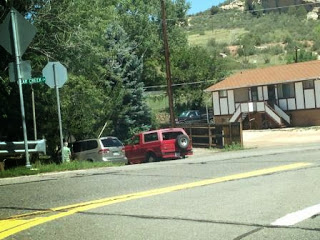 We passed two more mint looking Ford Broncos on the way there. It must be something about the crisp mountain air that preserves them. 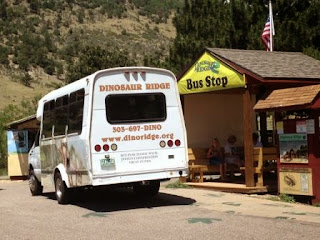 Our next stop was another return visit, this time to Dinosaur Ridge. Rosa remembered seeing Girl Scout patches there, but it turned out they were only on display, and required being part of specific Scouting field trips to get them. We got a generic patch instead and an extra post card. 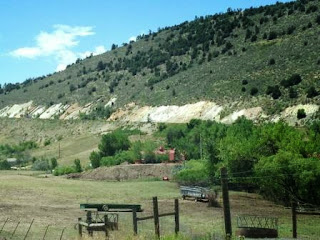 The GPS decided not to completely hate me for once, and I managed to navigate us to our final stop on the Atmobile training tour: Chipotle! 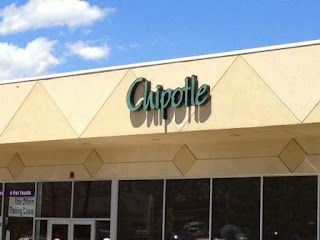 I wanted to get a sample of their healthy, tasty, and turbo fast Mexican food before heading back out of their range. I even splurged and got the less than cardiac friendly flour tortilla instead of a “burrito bowl.” Of course, when I got home, I learned there were two Chipotles within walking distance from work. So much for noticing my surroundings.

Titi LuzMa shifted her schedule, allowing her to meet us home for lunch. Returning issues with the garage door meant that the Atmobile was to be left out in the lot, and not get a final trip to the Atcave.

A storm was forecast, because we were still in Colorado, prompting us to rush out of the house. I managed to stash my gifts and postcards in the rush, but some things got forgotten. We remembered Rosa’s glasses in the driveway, and ran back in to get the item critical to her navigation skills. Unfortunately, I didn’t remember my hat, which I made sure to take out of its home for the past two weeks (the Atmobile) and then left in the bedroom. I noticed it was missing about halfway down Interstate 70, far beyond a turning back point.

Anabelle and I sat in the back seat looking through photographs on my phone. Not just pictures from this trip, mind you. Our cute patheticness had us reviewing images starting the previous February.

Thanx to some issues going on in the front seat, there were several exits and entrances of the highway, with multiple U-turns in between. I certainly wasn’t going to mention anything. This not only extended our picture reviewing time, but netted Anabelle the sighting of a New Hampshire license plate and two more Idahos. 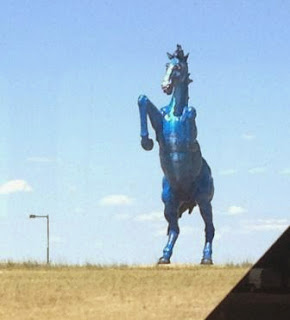 We arrived at the Park and Ride, with the ride part being an excessively bumpy and wobbly bus trip. The only good part of it was I finally did get a picture of the Big Blue Bronco statue on the way to the airport. Poor Anabelle needed us to buy some more Dramamine, as we didn’t expect to need it on the straight flat drive to the airport. I also bought her some caramel suckers, to keep the whole cute and pathetic thing going. 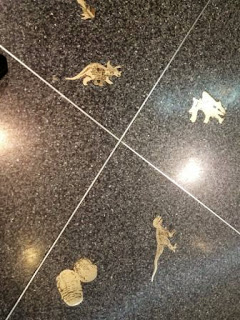 There was enough time before boarding to sit together in a little Ice Cream place after the suitcase was checked. After pushing it with the burrito, I just enjoyed my family’s company and heaped thanx on my sister in law for putting up with me for two weeks instead, until it was time to go.

They had the full body scanners up and running in Denver Airport, which have slightly different rules than the regular scanners. I thought I was all set to go through, and learned at the last minute that my laptop had to be all by itself in a little bin, and also that only removing my belt buckle was insufficient, the whole belt had to go.

Therefore I was completely discombobulated when I finally got through security while trying to gather my crap, get dressed and wave goodbye at the same time. Whatever it is I’m allergic to must have been all over that scanner pad, yielding a massive itchy feet attack on the tram to the gates. I managed to run to a store, and blow four dollars on one Claritin before remembering I had a Benadryl in my pocket for just such an occasion. 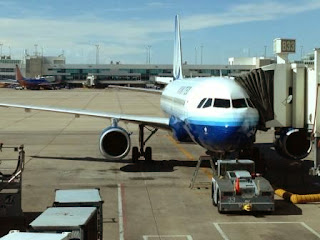 On the way to the airport, I got a phone call telling me my gate was changed from B36 to the nearby B33. This despite the fact that I requested text message updates for the flight. At gate B33 I took a picture of the plane to send to my family (trying to keep the cute and pathetic streak going). I then realized that the gang of surly individuals around the gate were all waiting for an excessively delayed flight to Las Vegas.


My phone picked that point to inform me of a missed call. It must have come through when I was sending it, along with everything I owned, through the conveyor belt scanner. It turned out that my gate was REALLY B45, on the other side of the terminal. Instead of buying a real meal for the flight and calmly continuing to send cute and pathetic texts and pictures to my family, I instead sprinted like a loon across the terminal, pausing only to fill my water bottle and grab another bag of Buffalo Jerky which inherited the title, “dinner.” 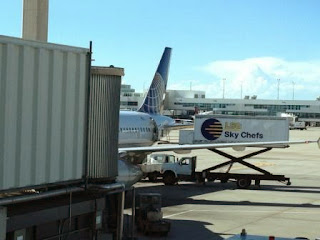 I got where I needed to be in time to take a picture of the real plane taking me home, and for the boarding announcements to be made, but not really heard. The very petite, very polite, and almost completely incomprehensible attendant was trying to inform us in which order to line up, but no one could make out much of what she said. As natives of Colorado milled about, a guy with a very strong and obvious New York accent actually needed to be somewhere. He very politely, but very efficiently got all of us lined up, checked everyone’s boarding numbers and sorted us around:

“OK, you go now. You’re after them, but before me. Everybody else line up here and get your passes out.”

We were boarding in a completely organized manner almost immediately. One Colorado guy (in his Colorado hat and t-shirt) was joking to everyone who would make the slightest eye contact with him, “That’s the most polite and friendly New Yorker I’ve ever seen. Ha Ha Ha!” He went on and on the whole way onto the plane about what an amazing and unprecedented event this was. His astonishment made it somewhat hard to hear the petite attendant asking if I would consider checking my bag. My answer of, “I can’t, my wife told me not to,” was assertive enough that she didn’t push her request at all.

We all settled in the plane, and had a bumpy but not overdramatic flight, complete with a near constant lighting show out the window.

Mr. Colorado Guy, amazed that a New Yorker could show ANY politeness at all, proceeded to watch Casablanca on his laptop for nearly our entire flight home… 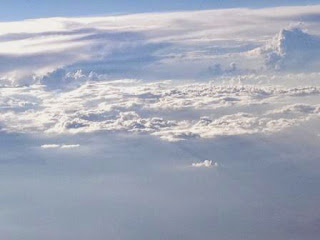 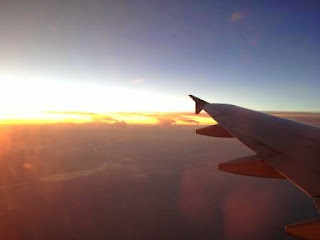 Days at Distance
Posted by Jeff McGinley at 2:00 PM