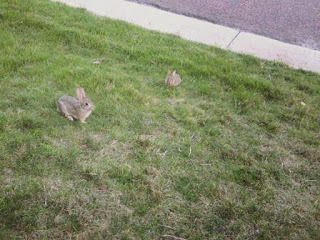 I got picked up at the airport in the middle of the night (Thanx, mom!) and staggered out into near triple digit heat and humidity that would have slain those two women from the Garden of the Gods where they stood. The house was far worse. After spending half of a brutal July with no air conditioning on at all, the atmosphere inside was nearly solid. What little time there was for sleep before work the next day was fitful, nearly lung collapsing, and quite painful…

As I fell completely out of bed trying to find a comfortable position.

I went back to work, did stuff around the house and yard, made some paintings, failed the occasional attempt to take lightning pictures of my own, and put extra time into swimming Up the Lake. I could stretch my limits, not having to feel guilty about abandoning them on shore for the extended period it took to accomplish my first couple of four mile swims. I honestly thought I had a five miler in me, but my body answered that request with a resounding “NO” that left pains in my joints until after the first snowfalls of winter.

Anabelle did a fair amount of swimming as well, in the pool. At least she did after Mami skimmed all the bugs out. I’m kinda sorry I missed what must have been quite an entertaining bout of dueling skeeved outness.

Displaying some kind of mental connectedness, Anabelle’s two little cousins kept asking to see the same pictures on my phone that I had looked at with her on the ride to the airport.

I also used my time alone to catch up on various viewings they either would find boring:
Such as the Second Dune Miniseries,
Inappropriate:
Such as movies with swords, explosions, or exploding swords.
Or too badly voiced to take seriously:
Such as The Dark Knight Rises.

They, on the other hand, caught up on more Marvel films, finally did see the Katy Perry movie, and also saw Men in Black III in a second run theater. I did show Anabelle the first two Men in Black films, which she liked, and suggested seeing the third together. But nooooooooooooooooooooooo, why would any of Daddy’s movie recommendations be worthwhile? She had to decide to see it on her own, and then call and taunt me about how good it was. Ah, the rewards of parenthood.

They took a bus to the above movies, having returned the Atmobile. Once Titi LuzMa could join them again, they went to a couple of other places as well. Meals were had at both Three Margaritas and El Rancho again, for which I can hardly blame them. Especially since everyone is forced to eat Buffalo Burgers the way Rosa prefers them out there: Well Done to a Crisp. This is in opposition to the Tex/Mex place near home where the “medium to medium well” we had to argue to get for her came out raw enough for me to enjoy…forcing her to turn her burger into a Sloppy Buffalo Joe, by trading her patty for my taco meat. 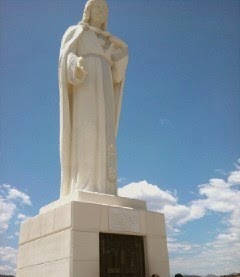 They walked to the park several times on their own. They also climbed the steps to the Cabrini shrine (without drinking the holy water accidentally upon returning this time) and went back to hike both up and down Dinosaur Ridge together. Despite all the warnings posted around the area, we never had any rattlesnake sightings while I was there. They got to see a big one.

I miss all the cool stuff. They also saw something that they described to me in a surprising text message as “A bunch of weasels.” A little inquiring on my part revealed it was a veritable housing development of prairie dogs next to the base camp. I’m not exactly sure how we missed that many on our visits, maybe the snake drove them out.

One of the big reasons they picked to stay the time span they chose, was to be there for the city’s major celebration of Peruvian Independence Day. For no explainable reason, the celebration location was moved at nearly the last minute. It was shifted over to an undesirable and potentially dangerous section of real estate.

This changed their plan considerably, and instead they returned to the Peruvian restaurant we had visited. However, most of the restaurant staff had gone to the celebration. The place was out of almost everything:
Entrees
Sides
Deserts
Waiters
Cooks

All that was left was some picarones, pollo ala brasa and the stuffed llama at the bar. From the way they described it, I’m surprised the building was still there. Luckily, what remained was still delicious.

They visited an impressive art museum, which became the “Tiny Town” of this vacation.

“Daddy, when we go back you haaaave to see this thing at the art museum.” 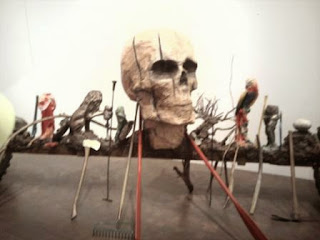 It sounded to be chock full of interesting exhibits, fun hands on learning stations for the kids, ample amounts of modern art to make fun of, and examples of high end artistic furniture that Rosa was measuring for placement in our home. Plus there was a laminar flow fountain outside leading to my getting cryptic text messages about being on “Goofy’s foot.”

I also received several excited text messages about picnics where the elks returned for a visit and giant pancakes. I don’t think the elks were eating the giant pancakes. You never know, the messages blended together a bit sometimes. 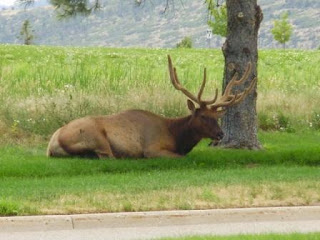 As much fun as we had apart, it was apparent by our phone and text charges at the end of the month how much we missed each other.

The day they were to return home, I got a less pleasant than usual text concerning a “hell storm.” At first I thought it was merely a misspelling, but a check of the weather website showed the entire state completely clear, with the exception of a large red blotch directly on the path between Titi LuzMa’s and the airport.

They were bombarded with marble sized and larger ice balls amid thunder and wind. They, and many others were forced to pull over and the possibility of missing the flight completely loomed.
It calmed enough to let them make it to the airport, and wait on the insanely long security line.

They managed to get on the plane, with their airport dinner plans destroyed by the weather. Arriving in New Jersey, they were safe but starving. However, that was nothing a stop at the diner on the way home couldn’t fix - the same diner we ate at prior to leaving to prevent generating any garbage before abandoning our home for a hunk of time. We worried a bit that we didn’t hear back from Titi LuzMa for a while, but after driving back through the hell storm, it was her turn to pass into the realm of unconsciousness.

With the Diner circle complete, we were reunited, and celebrated thusly the following night at Hunan Taste, because “Leave me alone, my family is back from vacation.” 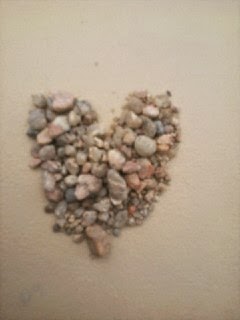