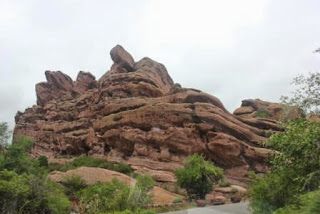 I set my alarm to get an early jump on the day.

It went off and I leaped up to shut it, because Rosa was unconscious, as was Anabelle in the other room. Realizing that was a pretty good idea, I passed out again.

We got up a bit thereafter to have breakfast. Somehow I managed to knock the ceramic rooster off the top of the paper towel dispenser during that meal, foreshadowing later events. (The things breaking aspect, not the chicken aspect.)

Our planned trip to Red Rocks Park started only a little later than initially expected. Fortunately, the drizzle that blattered upon the car stopped as we passed through some very Cadillac Ridge from Cars looking rocks and reached the site. 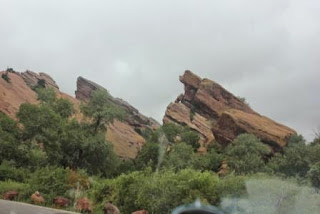 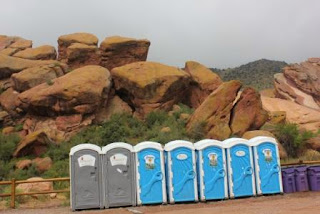 We paused briefly in the lot to photographically document a rare sighting of an Idaho license plate, while trying to not make it obvious to the Potato State tourists exiting their car that it was their bumper, and not the local, famous rocks we were documenting. 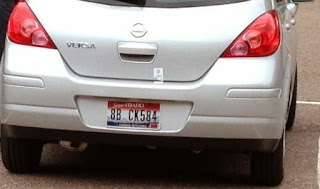 Fortunately, the facilities connected to the gift chop/café were much saner, although reaching the men’s room involved circling the building, 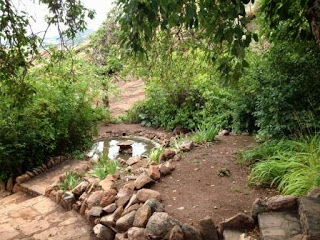 passing by a hidden (possibly enchanted) garden, and leaping over a moat. (The Denver area is in no way built to handle drainage after heavy rains.) 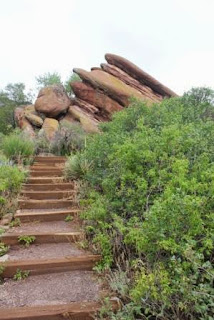 We chose the shorter of the two hiking trails for our stroll, and still saw a great deal of impressively colored and shaped stone scenery, as well as interesting plant life, particularly many weird looking cacti. Thanks to technological advances, I began to discover that even a goofball like me can take impressively artsy fartsy nature pictures with a Smartphone. 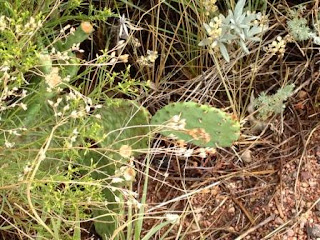 Titi LuzMa normally hiked the trails for exercise and took them at a much higher pace than Rosa and I wanted to (or were able to at that altitude). We hung back to take in the sights as we walked while Anabelle fired her turbo boost to keep up with her Aunt. This caused her to miss the first deer we saw near an impressively gnarly and twisted looking tree, but we all got a good look at the second one. The deer sightings marked the beginning of wildlife mooning me on this vacation. 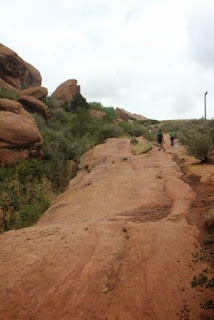 Nearing the end of the short trail, on a section that crossed the top of one of the large “Red Rocks” that gave the place its name, a small boy fell down in front of us. Being famously rude and impatient East Coasters, we offered assistance and components of our first aid kit.

Shortly thereafter, when Anabelle took a spill, being famously friendly and helpful Westerners, the local populace kept on hiking at full speed around us. 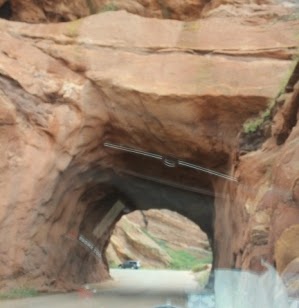 A concert was advertized that night of the local symphony orchestra playing the works of John Williams. While hearing “The Imperial March” when surrounded by the ancient and beautiful stone pinnacles would have been impressive, we wisely did not buy tickets. The nightmarish thunderstorms that rolled through that evening would have made it a very soggy experience. 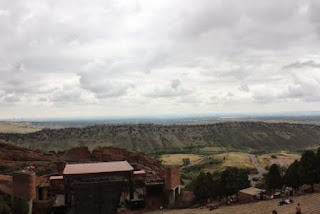 I finally remembered my juggling clubs on one of our outings…as we were leaving. We took a few quick parking lot pictures, packed up and moved on. 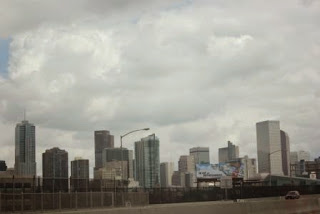 Hungry from our hiking, we steered the still nameless impala towards downtown Denver and an excellent Peruvian restaurant. Rosa checked into the “Peru” shirts they had at the counter (none in her size, she eventually got one in, of all places, Peru) and the tickets to the upcoming Eva Ayllon concert appearance (none in her price range, or safe neighborhood) before we were led to our table near the giant stuffed llama. Anabelle found a nice pin, though. The buffet (for them) and roast chicken (for me) made for a very welcome late lunch as a reward for our exertions.

We returned home hit the pool for a bit and had plenty of time before the Sunday night Mass started, therefore we easily made it to church early.

As we tried to leave, the garage door started to glitch and wouldn’t close. We couldn’t leave it open, because of the food, exercise equipment and other things Titi LuzMa stored there. Also, the keypad to set the alarm is by the door near the garage, not the front door, and we weren’t sure we could make it through the whole house without killing ourselves before the alarm initiated.

This left us with the option of very frantically, and equally unsuccessfully, trying to fix the automatic garage door opener while dressed for church. With that a total failure, I moved the car close to the front of the development row, locked the garage door from the inside, and told LuzMaria to wait for me across the house and outside the front door with the key. I miraculously was able to set the alarm and run up the stairs and through the home without injuring myself or anything else, at which point I took the key and locked the front door. Unfortunately, due to the frantic and sporadic nature of the previous conversations, while I locked the door she attempted to rush around to the car by going to the BACK of the development row.

In yet another desperate sprint, I shot around to where the car (and my family) really was, reversed down the lane to pick up my sister-in-law, and zoomed off to Church. Thanks to the rest of the world being much less focused on punctuality and speed than the New York Metropolitan area, Mass started late and we got there just as it began.

The service was fine, if slightly more Jesusy than we’re used to in our home area and we returned home to continue fiddling with the door opener. From this point on in the vacation, we left the Impala outside to reduce the number of mechanical items I needed to interact with on a daily basis.

Although the indicator and diagnostic lights were implying that the fault was due to a short, Rosa’s application of Windex made it look much more like the failure mode was connected to a filthy sensor.

The door seemingly fixed, we settled into the kitchen to have some of my patented grilled sandwiches for dinner. I somehow managed to break the sprayer on the can of Pam during this period, making me even more leery about touching ANYTHING.

Rosa and Anabelle tried out a Dancing with the Stars exercise DVD while I did some computer stuff. They got a healthy, if exhausting, workout that primed Anabelle for her first night on the air mattress.

Anabelle could sleep with Titi LuzMa on the nights before she didn’t work, but to allow her Aunt to get ready in the morning, Anabelle moved into our room the other days. We did have the air mattress, and LuzMaria did have a compressor in her car, there were, however, two issues:

1) The compressor had to be plugged into the car, and it was unlikely we could fit the inflated air mattress up the stairs and through the hallway. (Especially with my record for breaking things.)

2) More importantly, we had no connector to make the compressor inflate the air mattress.

Therefore, citing years of experience blowing up everything from arm floaties, up through alligator rafts, and even a Loch Ness Monster boat Up the Lake, I sat down and started filling.

My method was very simple: breathe normally, and exhale into whatever I’m inflating. Rosa and Anabelle looked through some brochures and made phone calls in one corner of the room, while I sat in the other puffing away. I listened to the “Blues” playlist on my phone, since my daughter never picked that one when acting as DJ on our drives.

My family greatly enjoyed the “Daddy as a Muppet” show as I danced around with only my upper torso sticking out from under the mattress while, and after, I finished blowing up the thing. When my wife hung up the call she was on I explained that I wasn’t only putting on a show, but was in fact stuck in the corner by the now fully inflated mattress.

They popped me free and we all settled in for the night before starting our first solo adventure.