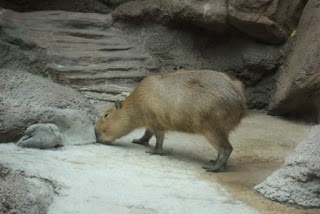 Our plan for an early start was thwarted yet again, this time by Anabelle waking up in the middle of the night with itchy feet. No amount of treatments or coatings could stop it, and we were eventually reduced to giving her a major foot bath. I woke up at about five AM with similar issues. Luckily, we deduced that there was some connection to de-shoeing before entering the house from the garage, and with implementation of nightly sole scrubbing, the problem didn’t resurface.

Thanks to our exhaustion from the night’s foot antics, we didn’t hear Titi LuzMa’s renewed issues with the garage door. We only found out about them when she called during breakfast, and said she didn’t want to bother us. We told her to wake us next time so we could lock the door behind her, instead of her trying to play “find the sweet spot” on the automatic opener.

We planned a full day at the zoo, based on our animal viewing sprint when we tried a half day the previous year. The slight drizzle concerned us on the way to the park, but not nearly as much as the torrential downpour that initiated when we parked in the hippopotamus lot.

We decided to go clockwise around the zoo this time to allow us to first concentrate on the exhibits we ran past on our last visit. The outside animals were all hiding from the unusual wet stuff cascading out of the sky, leading us to try the shelter of the feline house. 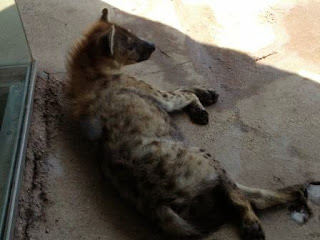 I’m not sure if it was the hour of day or the weather, but almost all of the impressive variety of cats and hyenas were napping. Also, following the trend, almost all of them had their rear ends facing me. The mooning from nature continued. The sea lions and polar bear had a great old time swimming and splashing around in the rain. However, we were starting to get chilled and squishy, and decided an early lunch was in our cards.

Sadly, the café next to our location only had outside seating, which didn’t really address our problem. We therefore decided to investigate the combination reptile house/aquarium called “Tropical Discovery,” which was huge, impressive and far more of a pleasant time when not experienced at Mach Five. 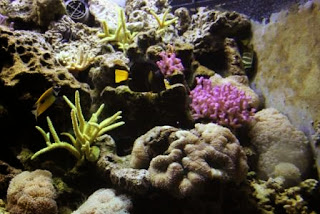 We finished checking out a wide and amazing variety of wildlife, including some far more active than usual Komodo Dragons and other reptiles. 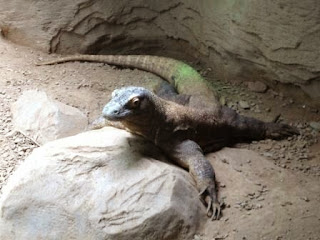 Outside was the normal Denver sun filled sky. We learned that the café did not only just have outside seating, but it also only had pizza and dessert, which wasn’t going to meet our requirements. Pausing briefly to run over to the wolf enclosure and see nothing, we walked back to the entrance.

The retracing was a good thing, however. The shift in the weather brought out all the animals we missed on the rain soaked previous pass. Lunch at the main cafeteria followed as the day got much brighter, and the fact that Denver has good Mexican food darn near everywhere, even lowly zoo cafeterias, was cause for additional celebration. 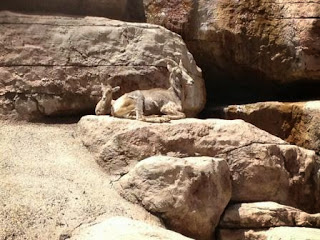 Since we came from the other direction, we accepted the hand of destiny pushing us counter clockwise around the zoo again, and made a bee line for Anabelle’s favorite, the bighorn sheep. She was sad that no males were in the display. The male Dall sheep next door didn’t help much, but the nearby penguins cheered her a bit. 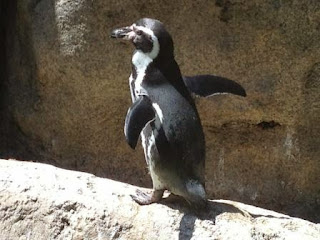 The apes were to be our next goal, but the Endangered Animal carrousel distracted our course. There was a combination of good and bad timing. True, we reached the ride at the same time as a day camp trip, in what otherwise was a pretty empty day at the zoo, but Anabelle’s location worked out to give her first choice when her turn finally came up, netting her the ride on the dolphin she was hoping for. We exited the carrousel area by a different path than we entered it to check out the impressive new Asia themed elephant area. It ended up paradoxically being both larger and smaller than we thought it was. My guess is this came from a combination of entering the exit, and thinking we were finished at the half way point. We worked our way past the hoofed mammal exhibits we dashed past on our last visit, taking more time to focus on the animals, on our way to the ice cream stand…
That unfortunately sold the wrong kind of ice cream, changing our focus back to the right side of the zoo again. 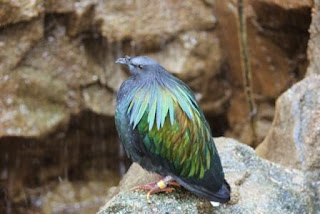 The beautiful displays of the bird house started our camera duel in earnest. Rosa cheated a bit by using her Ginormo Telephoto Lens on the Super Deluxe Magic Camera. She also cheated by using her photographic luck powers. I must have watched those damn lovebirds for an hour while they ignored each other after smooching when I first arrived. As soon as I left, Rosa snapped a kissy picture. 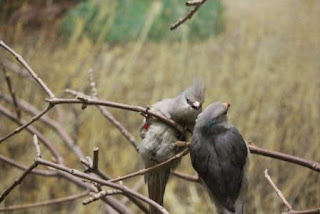 I did manage to get an excellent picture of a sloth. However, my wife and daughter maintain I took a picture of its butt, while I maintain I took its face. If it’s that hard to tell, though, I’m not sure it matters and feel kinda bad for the species in general. 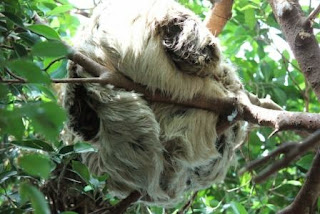 The lorikeet feeding time was over, but we were allowed to walk through and take more photos of birds romantically pestering each other. 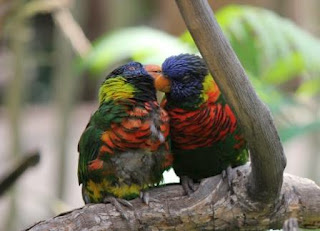 Finally we did make it to the monkey and ape houses, allowing me to thrill to the fact that human’s closest relatives were now mooning me every time I picked up my camera. One exception was an ancient orangutan, whose soulful stare made us understand his nickname of the “old man of the forest.” 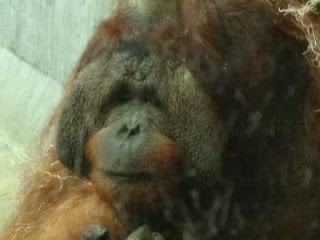 There was also a jerky teenager who went out of his way to say my Buzz Lightyear uniform shirt was weird. When I answered with an enthusiastic, “THANK YOU!” he made sure to say, “That wasn’t a compliment.” Considering how many kids and parents said awesome things about it, I consider meeting him yet another monkey butt I encountered in the Denver Zoo. We found ourselves near the bighorn sheep exhibit again, where there were still no males. Anabelle was becoming visibly disturbed about it. We checked the sign at the enclosure to learn where to see the Colorado state animal in the wild nearby, but that didn’t calm her down. The Dall sheep family impressively eating together still didn’t help. We had asked some keepers by the elephants about the male sheep, but they had no answers. Luckily other keepers we met on the way out told us that sometimes he’s not put out for medical reasons, but often he’s just cranky. My daughter’s spirits visibly lifted and she triumphantly yelled, “He’s not dead!” She probably would have had a much calmer zoo day if she voiced her concern at the start of it, rather than keeping it locked inside. Lesson learned for all of us.

We lucked out some more, as the cheetahs came out for an end of the day appearance, now that the rain was long gone. Then our luck took a drastic negative veer when we stopped for a snack.

This encounter was one of several examples highlighting my theory that what is perceived as the rest of the world being more polite than New Yorkers, is simply them being more patient, and conflict averse.

The girls ordered ice cream, and I ordered a salt free pretzel. Colorado counter guy said he didn’t want to give me the ones he had on the rack, because they were “getting old and somewhat hard.” Therefore, he asked if I’d wait four minutes for the next batch from the cafeteria across the walkway. I said, “No problem”, and sat with my family.

After waiting a Colorado four minutes (which equals ten minutes) I went back up to ask about my alleged pretzel.

Colorado counter guy walked across to the cafeteria and then returned to his job. Shortly thereafter, the woman he talked to came out carrying not a pretzel, but a bucket of wash water and a sponge.

I wandered over to join their conversation, in case it involved scrubbing some of the now discarded old, hard pretzels.

It turned out that the cafeteria had been closed since Colorado counter guy first asked her about the pretzels, shortly after taking my money. There were apologies all around, and Assistant Colorado counter guy offered me an ice cream for my already handed over cash. I opted for a refund instead, and we explored the gift shop. 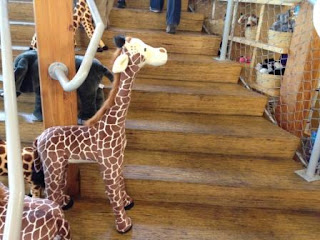 Our exploration was really only long enough for Anabelle to remind me about the stuffed giraffe I tripped over the year before, and demand I take a picture of it. Having completed this vital task, it was back to the hippopotamus parking area (now inspiring a pile of poop jokes) and home.

Titi LuzMa warned us that it might be a bad idea to leave at that time, as we’d be getting on Interstate 70 in the middle of rush hour, and could end up stuck in horrendous traffic, or worse.

I pulled toward the highway entrance, slowed up as I drove on the median and put my signal on to indicate I needed to enter the “horrendous traffic.”

The horrendous traffic then stopped cold because it saw my signal and let me in. With a lifetime of New York and New Jersey driving experience facing these excessively conflict adverse motorists, I proclaimed, “Getting home’ll be easy!”

It was still late when we got in after a long zoo day, and the home cooked meal was very welcome. Once Anabelle went to bed and we began our evening ritual of computer checks and photo reviews, the results of the camera wars could be analyzed. Though I was able to get some better angles in the interiors with the Smartphone, the Ginormo Telephoto Lens gave Rosa the first win.

Though only two hours, the time change confused us enough that we needed to postpone my Uncle’s birthday phone call till the next morning. As usual, the day ended with my nightly combination of checking computer things, a glass of red wine, and passing out face down on the keyboard. 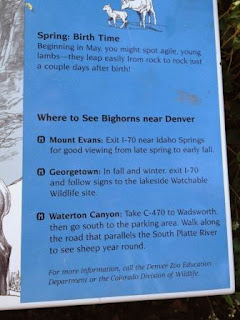 I'm curious. What is the wrong type of ice-cream? I definitely have a hierarchy of preferable ice-creams.

I'm sort of offended that you insulted monkey butts by comparing the rude teen to them.

Apologies for offending, I am a large monkey fan myself, but I am a bigger fan of cheesy transitions and segues.