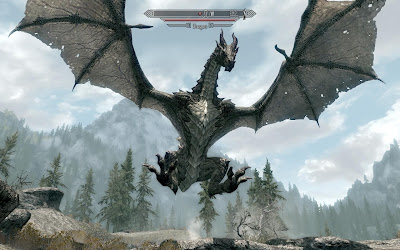 I was planning vacation over the holidays after some stressful times and decided I hadn’t wandered aimlessly through a new open world game in a while.  I’d remembered impressive commercials and comments from friends about The Elder Scrolls V: Skyrim, always liked Dungeons and Dragons, and learned it didn’t matter that I knew squat about what was written on the Elder Scrolls I through IV.

There are open worlds and there are OPEN WORLDS!!!!!
I looked in the box and found the map of a continent.

I may never sleep again.

I knew I was in trouble when I tried to figure out which character race to pick before installing the game, and that in itself took hours.

Note: I played D&D far too long to remember all these new names for creatures, meaning most of my references will be wrong.

Just about every character I ever rolled up was some variation of “the big guy who hits stuff.”   Even the first character I created, Gonzo the Halfling, was the "Fighter" of the party with Calibos the Thief and Barf the Magic User.   We were a classy bunch.

That usually narrows down my selections for initial play.  Skyrim had at least four options fitting that mold.  However, I forgot about a variable that didn’t exist in my childhood gaming days.

I showed my daughter the list of character types and she immediately got excited, “Ooh there’s a kitty person!”
Plus another one that generated even more squeeeee-ness.

“You should be the Chicken Lizard.”

Therefore my character is feathered Lizard Man named, what else?
Leopold C. Lizard.

Considering how often I fall off things in video games, the water breathing and healing abilities are nice bonuses.

Being a small, scaly, stealthy dude meant a shift in the “big guy who hits stuff” idea.  My first plan was to be a sneaky, destructive spells based, Magic User individual…

Until I looked at the spell categories and requirements.
Magic rules are still annoying and confusing.

Instead I decided Leopold was a dashing, if leathery, rogue much like Robin Hood.  I’d ally with the rebellious faction and through guile and dexterous dual wielding combat endear myself to those down trodden and oppressed by the ruling class.

Hey, they made it a role playing game; I’m just enjoying the sandbox.

The story began right into the action. Before designing the character, it started with me being brought to the gallows in a wagon load of those rebellious folks. (Letting me learn to look around before learning to move, tutorials can be well hidden.) When the tally man asked to identify myself, then the menus for design and Chicken Lizard customization came up. 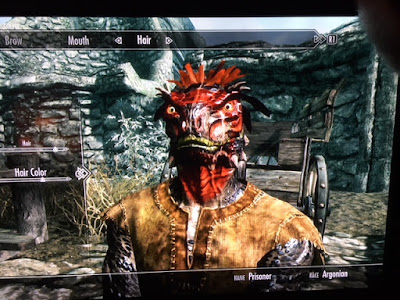 The dragon attack caused all hell to impressively break loose, in a graphical way my Intellivision and Sega Genesis trained brain was not equipped to ignore. Therefore I got lost following an escaping prisoner, who was a fellow member of the rebellious faction, and instead accidentally followed a helpful Imperial Guard who showered me with apologies for wrongful arrest and recommended me for services in the army of the realm.

Suddenly Leopold was a dashing, if leathery, rogue, quite unlike Robin Hood.  Because I’d endear myself to the well taken care of citizens and diversity accepting ruling class of the realm to use my guile and dexterous dual wielding combat against the intolerant rebellious faction.

Hey, as long as I get to hit people.

I wanted to stick with dual wielding and not build up the archery skill, as I felt it was cliché as a video game “thief.”
(I think D&D even calls them “rogues” now.  I guess the Thieves Guild has an anti-defamation league.)

However I learned pretty quickly that at low levels, hiding is a temporary tactic at best, and it is a life prolonging practice to insure any “big guy who hits stuff” has been transformed into a armored pincushion before he sees me and I become one of the stuff he hits. 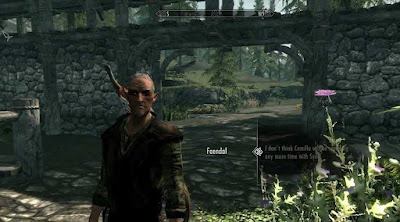 The problem with a game this enormous, outside of staying awake for mind damaging lengths, is accidentally stumbling into opponents you aren’t ready for.  In Riverwood (the first little town I escaped to) I picked up Faendal  (an Elvish archer) as a follower after resolving a goofy love triangle. (a quick and pointless introductory side quest) We took out a small, local bandit camp together, to the cheers of the local populace.

Therefore, when I heard about another bandit camp, we bravely sallied forth with promises of protection, primary in game goals be darned.

For those not paying attention:
Faendal and Leopold played the part of “stuff” in this exercise.

My initial idea of locking the gate behind me and peppering them with arrows through the bars uncovered an interesting game mechanism.  While unlocking things is an entire minigame unto itself, locking things is a technology never discovered in the land of Skyrim, leading to one of many many many reloads after being "hit stuff" to death.

The biggest reason for all those reloads is I brilliantly saved the game right on the little balcony overlooking the main part of the inner sanctum. In another unfair inequality, sneaking in was FAR easier than sneaking out, and they always heard us and gave chase.

No matter if I tried a preemptive arrow strike, a hidden attack as they passed, or a brave stand at the end of the entrance corridor, the chase ended quite badly, with much hard hitting and electrocuting of my Elfy friend and me.

After trying multiple ineffective escapes ranging from the "sneaky" to the "running and screaming" variety for both of us, it came down to choosing between starting the game again from scratch, or fleeing my lizardy tail out of there while they wailed on poor Faendal.  A couple more reloads following meeting a troupe of large mercenaries on my lonely walk home, led to running back to town through the backyards of a series of farm houses, like a herpetological Ferris Bueller.  I sold off the few treasures I grabbed on the way in and headed north.

Due to his place in some other story specific need.  Archery Boy reappeared at my side the next time the game did a location transition load. So much for that night’s sleep lost trying to get the both of us out safely.

We left the dinky, and still bandit hounded, town of Riverwood behind and went to the first large city (and finally to the main storyline) in Whiterun.  Of course a new city meant about four hundred side quests but we eventually found our way to who had summoned me for information about the dragon, the Jarl.  (Norse hairy men language for “mayor.”)  Telling him more about the dragon triggered another sighting nearby, because fantasy worlds work that way and we were off sprinting to join the guards at the outpost tower.

Being an experienced gamer, I immediately climbed that tower to gain the high ground on what was assuredly a flying and dangerous foe.

Being a modern game that teaches as you go, the dragon landed and battled the troops at a disadvantage to itself, losing while I was trying to balance on the edge of the tower to see where it was.

Then I fell off and died.

Reload- talk to the Jarl, sprint to the tower, blah blah blah, fight on the ground this time, VICTORY! 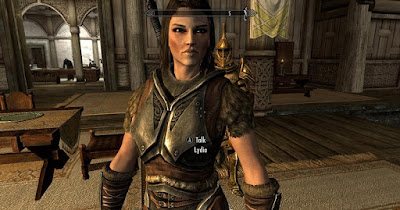 Granted she could be a little overzealousin that “big woman who hits stuff”ness. There was a couple times where an interaction with a peasant would go astray, and even after they drew what looked like a butter knife, I’d try to diffuse the situation with my roguish lizardy charm…

Then Lydia would diffuse the situation, and the peasant, instantaneously with large bladed weapon embedded in the skull finality.

Heck, the two of us accidentally “diffused” an entire abandoned fortress filled with brigands we stumbled upon on the way to help someone else.

Needless to say, by this point I’d leveled up a bunch.

Side note: If I haven’t mentioned it enough, this game is huge and crazy. I’m pretty sure you could play the whole adventure as a merchant, building up skills in manufacturing, enchanting and smooth talking, and with a little stealth ignore most of the combat, defense,  and magic skills.  It’s quite a paradox that a game that can take well over three hundred hours to finish is designed to have easy customization and differently played multiple times.

Anyway, I’d leveled up a bunch, upgraded Lydia to steel armor and a reinforced battle axe, and was ready to pay Mr. Big Orc Bandito a return visit with interest.

Yet again, my old guyness betrayed me. Games of yore would always reset when you returned to places you’d left.  We entered the cave where his lair was and found the Big Bad Bandit Chief still alone up in the front room after chasing us out.  Caught in a tiny room on his own with the two of us, he was filleted before he knew he had guests.  Down the hall a bit, we found the arrow riddled body of the wizard, next to his electrocuting staff.  I guess my Elvish buddy got off a few good parting shots while I abandoned him and ran for the hills.  Now I really felt guilty.

That left the assistant HUGE orc who hits stuff REALLY HARD back in the sanctum all by himself.  I lightninged him with the dropped staff as he ran up the stairs enough to make him into an Orcish road flare.  By the time he staggered, stumbled and smoked right between Lydia’s well-stained big axe, and my smaller and well-hidden pair of little ones it was a mercy to take him out.

Where will the future take Leopold and Lydia?

After almost forty hours of play, hopefully back onto the early parts of the main storyline.  I seem to have acquired a destructive shout ability that I keep confusing activation button with the one for "sprint."  It's caused some fun encounters with the city guards when I'm in a hurry in town.

There’ve been rumors of a vampire uprising in the west, and hints that crossbows can be found there.  That would be far less cliché.

A cloaked, feathered guy with a crossbow? 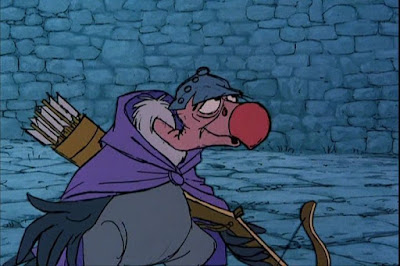 Congrats for joining the league of extraordinary non-sleepers! I have yet to finish this game and have owned it between two different generations of Xbox consoles. My wife, by the way says "Yay!" to the news of you Syrim'n. She's the household expert and I think the only one here who has finished it (and then restarted with different characters several times).

Many thanx for the welcome and for reading. Since it was some of her posts about it that got me into it, this is some kind of "circle of video life" thing here.

I am truly impressed that she's played as multiple characters. I have background mental plans for that, but will more likely be too old and feeble to hold a controller by the time Leopold becomes the Chicken Lizard messiah...or however it ends.