The Fly Remakes Through a Kid's Eyes 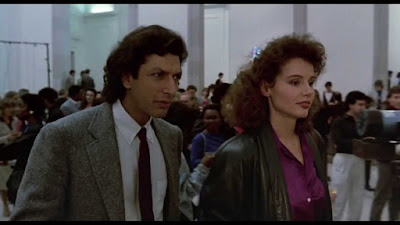 The Fly
1986
There was a slight delay before we continued through the awesome (as always) Shout Factory boxed blu ray set.   Anabelle looked up some pictures online and didn't want to watch the newer Fly films because they looked "scary."
This is from the same person who thought Poltergeist and Carpenter's The Thing were great examples of comedy, and who lists Sleepy Hollow as one of her all time favorite films.
Within a week she decided she wanted to watch them.
There was much screaming.
It was the kind of screaming that usually happens on roller coasters mixed in with her "horror movie" deranged sounding laugh. The whole family had a great time with these two. It was Rosa (who theoretically doesn't like horror movies, in spite of watching every ghost themed TV series known to man) that convinced Anabelle to watch them because they were "gross but good."
Correct on both counts!
I mentioned the lead actor was very "Jeff Goldblum"y in this one, and my daughter replied. "Two sentences into the film and I can tell that already."
You can note the quality of the original by how frequently it is referenced in the remake.  In fact, there were some aspects of Seth Brundle's speeches while losing his humanity that were perfect echoes of Delambre's written agonies in the 1958 classic. 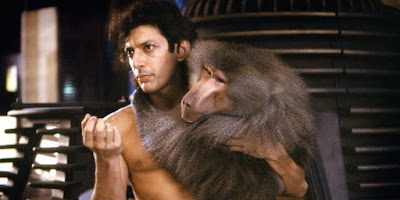 Anabelle summed up the tale perfectly when Seth experimented on himself.
"You mean the whole story happens because he got jealous and drunk teleported?"
The Eighties were a gold mine for horrific practical effects, which always look more real and visceral than CGI to me.  There was already a fair amount of yelling at Gina Davis on screen to stay away from the awkward scientist early on. However, Anabelle did approve of his having a closet full of identical suits and shoes.
When the baboon turned inside out on a teleport trial, she yelled, and then we both made Galaxy Quest jokes, because we're horrible people.
The screams, laughs and "EEEEEEEEW!!!"s kicked into full gear at the bone snapping, arm wrestling match.
Before I get accused of teen abuse, her favorite scene in the whole movie was where Brundlefly vomited on the donut, apologized for it being disgusting...

And then his ear fell off.

There were all together different types of scream in the maggot birth dream though, and they were not accompanied by laughter.
Both happier noises were there when the fully flied creature spewed digestive juices on Stathis, Ronnie's harassment-full ex and boss that led to the drunk teleport.  Naturally they had returned earlier  when his jaw fell off at the start of the final transformation. His leg was off camera at that point prompting Anabelle to ask:
"Does he have a 'Floot'?"
To which I replied, "I think he's well beyond 'Floot.'" 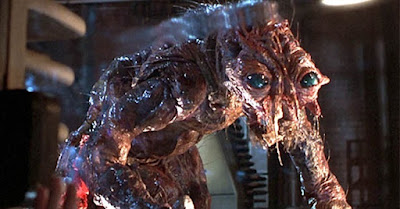 She thought Stathis was a complete sleaze at first (which he was) but liked him by the end for both simply surviving, and helping out.
One great thing about this film is the relentless pace. It clearly showed you don't need a two plus hour run time for every story. The movie is set up and scares with no fluff at all.  The first scene had the two leads meet at a party, where Seth invited Ronnie to his apartment to see his teleporter. The film took off at full speed and never slowed down, containing everything it needed to in a mere ninety-six minutes. 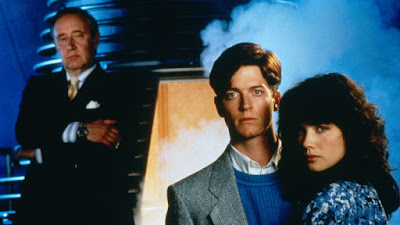 The Fly II
1989
In spite of telling me she was suffering from P.T.F.D.-
"Post Traumatic Fly Disorder"
Anabelle wanted to watch the sequel only one day after the remake.
She asked about it first and I said it was more Sci Fi action than straight Horror.
Displaying her knowledge of other famous franchises of that era, she asked why it wasn't called "Flies."
When I told her it starred Daphne Zuniga from Spaceballs and Eric Stoltze, she stared at me blankly for a very long time.
Then I added, "The actor, not our cousin."
"I did not know there was an actor with that name," was her reply.
She was quite surprised at how much was taken from the less than stellar Curse of the Fly to inspire this one in much better ways. (Including the main character's first name.)
She did have issue with the more clearly displayed and defined rapid aging of this Martin.  On the one hand, his much shorter lifespan, and advanced intelligence would lead to accelerated maturity.
On the other hand, as Anabelle put it during Martin and Beth's intimate moments:
"STOP THAT, HE'S FIVE!!!!"
It is definitely less of a horror film, but it was nice to see someone in these stories deserve and get a happy ending for only the second time. Anabelle said the opening birth scene was what she was expecting in the last movie, "NOT A GIANT MAGGOT!!!"  (P.T.F.D.)
The rest of the story was less gross as well, with Martin's eye removal being more clinical looking than Seth's shedding. Anabelle's response was, "Oh he's got a fly one behind it," rather than the screaming laugh when she chastised his Dad in the previous outing for having a cabinet full of bits that fell off.
Even the final flybrid itself was much less scary, likely due to it forming "naturally," ending up with a more aesthetic appearance. While my wife covered her eyes, my daughter did highly approve of (and cheer on) him vomiting on and dissolving one guard's face and squishing another guard under the elevator.
That's my girl.
She said she missed the baboon when Martin tested the cat,  was very upset at what they did to the dog, and full of vindictive glee that the same fate happened to Bartok.
That is also my girl!
Oddly, while she didn't want to watch any similar attacks in the movie, Rosa was hoping the jerky security guard would get vomited on to a large degree.
That is my wife!
I kinda feel like- since the jerk specifically insulted, manhandled and tazed his girlfriend- Martin wanted to deal with him as a man, not a fly.  Granted, snapping his spine like he was folding a pizza box to throw in the trash was more "Mortal Kombat fatality" than "man-like," but it was closer than belching forth a flood of corrosive goo.
Naturally when Martin emerged from his cocoon in full fly mode, but still hidden in the shadows Anabelle asked, "Does he have a 'Floot'?"
I replied, "I'm pretty sure he has a 'Fleverything.'" 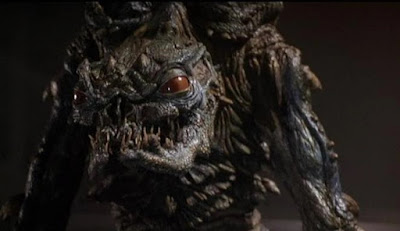 Stathis went up even further in Anabelle's estimation in this round. This was first and most importantly for making darkly humored jokes about Seth vomiting off pieces of his anatomy, and second for helping Martin and Beth.
Overall, she was very sad there are no more Fly films...
As are we all.
Buzz Buzz!
Here are Anabelle's final rankings, highlighting that it is a generational family trait believing that, sometimes, (or, in fact, often) bad movies can be more fun to watch than good ones-
Enjoyment-
Return of the Fly 1959
The Fly 1958
The Fly 1986
The Fly II 1989
Curse of the Fly 1965
With a footnote that she enjoyed all of the first four a great deal.
Her Ranking of Actual Objective Quality of the Films-
The Fly 1958
The Fly 1986
The Fly II 1989
Return of the Fly 1959
Every Movie Ever Made Since The Beginning of Time
Curse of the Fly 1965
Final Aside: "Floot" had an online definition. It means to fluff a pillow.  We were disturbingly excited by acquiring this knowledge, and Anabelle immediately asked, "When Philippe goes to bed, does he floot his pillow with his Floot?"  Therefore, I decided I don't care that I could not find decent confirmation for this.
Universal (and other old horror films I guess) index
Posted by Jeff McGinley at 2:00 PM

This morning Alexa let me know that it's the 35th anniversary of the Fly. I thought of you and this post. Then I was doing my French Duolingo lesson for the day and one of the exercises is learning how to say "Help me" in French!

Ah the wonderful world of synchronicity rears its head again. Congratz on the ability to pick up another language. I don't have that gene.

This happens to me a lot with posts, I accidentally just miss anniversaries, I had no idea were coming. Oh well, close enough.
thanx!