Toss a Coin to Your Rewatcher 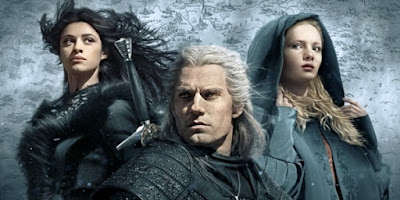 I finished my second time through the first season of The Witcher.
It remains crazy good.  It has clever, complex characters and situations to keep it smart and interesting, mixed with classic sword and sorcery tropes to keep it fun.  It's truly a mature fantasy tale, not merely a low level fantasy adventure with sex, gore and profanity thrown in.
Though it excels at those. 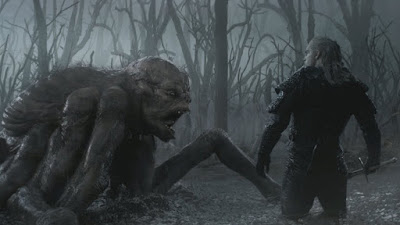 Between the combat and canoodling there are well constructed themes, intriguing individuals and moral dilemmas.
How good is it?  If Daredevil isn't my favorite Marvel comic book character, he consistently remains in the top three. I thought all three seasons of his Netflix series were amazingly well done.  (Huh, and the fact that Witcher show runner Lauren Schmidt Hissrich was a writer on Daredevil probably has a lot to do with it.)
Yet, I was never tempted to rewatch old Hornhead.
A big part of the desire to view The Witcher again, and the enjoyment of doing so, came from the non-linear storytelling nature of the series.
While I'm thrilled they are making more, its a bummer they stated they would abandon the out of order method of presenting the tales.  With seemingly ageless characters and the rich history of the land and people they've created, there would be ample opportunity to have adventures with complex back stories weaved through them, allowing the audience to continue to try to figure out when things occured based on subtle clues.
I had planned to talk about the logical lack of aging for Geralt, Yennifer and some other characters, and then provide some theories about Jasker.  The problem with coming into a show late, is there are a zillion theories about his possible immortality online already, and the writers have debunked them all...so nevermind.
The point is- with the extended timeline already established, and the fantastic back stories they've presented, it would be a breeze to keep using the non-linear storytelling instead of straight flashbacks to introduce new (and flesh out old) characters.
Then again, each character's story in Season One was presented in order, the surprise that they weren't all concurrent was cool, but would be hard to duplicate.  As long as we get flashbacks I'll be happy.
Another outstanding point about this series is they have addressed what I think of as "The Conan Problem." It's the reason I feel Conan is only written in a way that feels correct to me by Robert E. Howard and Roy Thomas.
But first, speaking of that Cimmerian, another fantastic thing about the Witcher is the music!  And as stated Monday, I know good orchestral fantasy music when I hear it. The score is epic, and most of the end credit songs are also epic.  The Leitmotifs help identify characters throughout the changing timelines.  Picking up the three hour Japanese import soundtrack was a no brainer before I finished my first pass through the season.  Like most fans of the series, I have been humming "Toss a Coin to your Witcher" non stop for months. 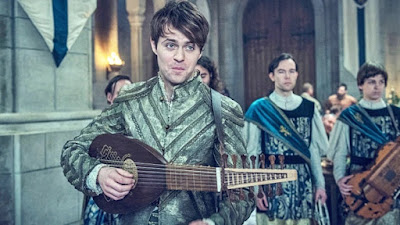 Jasker's songs are dangerously catchy, usually funny as anything, and when they morph into fully orchestrated themes...yes...epic. Joey Batey took what could have been a one note comic relief and made him likeable and deep enough to steal many of the scenes he's in.
Back to "The Conan Problem."
What I'm referring to (to semi-quote myself) is most other writers try to give Conan more character development and internal turmoil than Howard (or Thomas) ever did.
Conan is primarily a static character, he lives in the now.
Geralt is different from Conan, he's clearly more "book smart," much less superstitious, and has a bit more going on inside.  He's still a brooding and mostly static individual. Too much growth or introspection would take him away from the fantasy archetype he is that makes him entertaining to watch.  His character arc mostly comes from accepting the code of belief he's already demonstrated he has.  With this frame, he has carried being the focal point of the series excellently.
If anything Conan writers may have it easier because he goes through a series of jobs: mercenary, thief, pirate, king and so on, to add variety.  The character doesn't really change as time progresses, but he gains skillsets.
Geralt is a monster slayer with honor and a drive to protect the innocent, even if other's define the innocent as monsters. Using battle prowess, some magic powers, knowledge and potions, he's basically got one job. 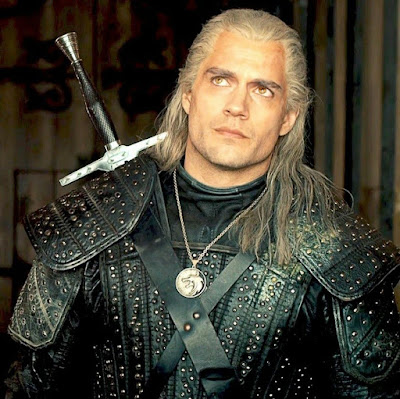 Everyone in-universe believes Witchers have no emotions, and Henry Cavil's performance proves that wrong several times an episode, usually with impressively subtle reactions, and dry wit.  These stand out even more since he pulls off the glowering unstoppable battle master with equal amounts of grace and power.
This show's solution is an interesting and effective one.  Geralt doesn't go through much development in the season.  He is Geralt of Rivia.  He has his job, his honor and his morals.  He is the title character but not really a classic protagonist following a journey of change and growth. 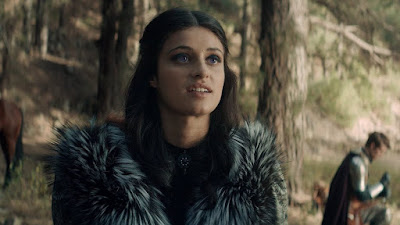 The women of the stories are the protagonists, especially Yennifer.  We follow Yenn's character arc and changing goals from her sub-humble beginnings to becoming one of the most powerful beings in the realm.  Heck, she plays a key role in the climactic battle of the season, while Geralt spends most of that final episode in an unconscious flashback.  The series is sneaky about this, since she doesn't appear in the first episode, allowing Geralt and Ciri to demonstrate the setting through their tales. Anya Chalorta (and the writing of course)  make Yennifer of Vengerberg deeply flawed but relatable, and therefore a delight to follow throughout her complicated journey.  The co-stars she plays off of build the details of her and their characters as well as the world being shown. 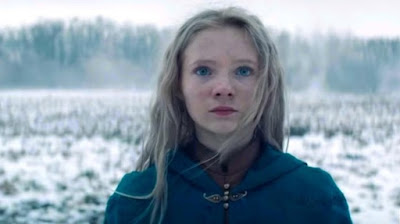 We see, not only the start of Ciri's journey, both internal and physical, but also her family's past,  laying out the setting and history of the realm.  Watching her confidence and power increase as she travelled makes me look forward to how Freya Allen will expand on this next season.
Geralt moves in and out of the women's, and other stories, interacting with elements of them, and having awesome sword fights with bad people and things (which are often also people)  along the way, with Jasker often in tow to sing about it.
This also solves another rather large Conan problem: the women in the classic pulp adventures tended to be two dimensional- as sources of evil betrayal, mindless prizes to be won, or both. (Except Belit, naturally)
The season is a larger example of how each episode worked. It told a complete story, but it also laid the ground work for all manner of open ended possibilities and questions. 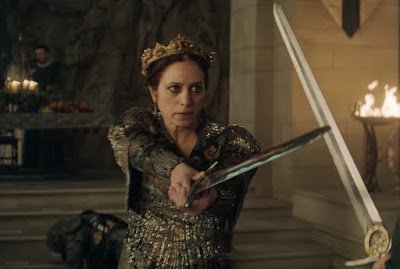 The complexity, and the benefits of multiple non-concurrent stories extended to many of the lesser seen characters as well.  I'd like to see more history of the Lioness of Cintra myself, who started off looking like the leader of a classic fantasy "heroic kingdom" but had more layers of darkness revealed as the series progressed.
The same is true for the Rectoress of Aretuza, who started off appearing manipulative and sinister, but over time...
well...
looked more manipulative and sinister, but with layered redeeming qualities. 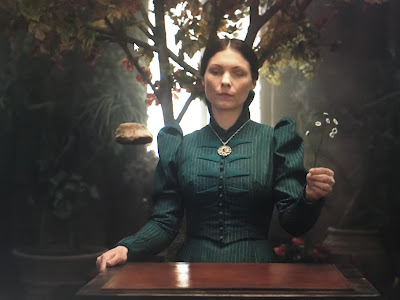 And aside from, "Where to the main three go now?" I have so many other questions that I would happily spend a side story in several episodes experiencing.
Such as:
What's the history of Cintra using Druids instead of mages, and what is the difference between them?
Where is Ben Ard, where male sorcerers train, and is it far away, or like... another wing of Aretuza?
Did Dara go find the elves in the mountains, or go back to the Dryads?
What's the deal with Vilgefortz whacking one of his allies after the battle?
(That's an obvious main story question, but Vilgefortz is too fun to say to leave it out.)
Yes, I know the books and games probably answer some of these, but I am now emotionally attached to these versions of the characters, and the personal stamps Lauren Schmidt Hissrich, the other writers and the actors have put on them. I have no doubt they will continue in their own direction, and I will happily be along for the ride.
The cast is fantastic, and the stories are amazing, with elements of fun, darkness and a lot of thought provoking-ness.
I happily anticipate the next season. The world they created is so rich, we should at least get extended flashbacks if not true non-linearity.
And more wicked songs by Jaskier.
And more time with the violence and profanity loving dwarfs, whether or not they have anything to do with the story at all.
Family asides-
To my sister, yes you will probably enjoy the adventures of the more pumped up than he was for Superman, occasionally shirtless Heny Cavill  much more than the franchise that prompted the phrase, "I don't care about Frodo or his stupid ring."
To my mother, no you can't borrow the discs, it is only on Netflix. But we need to figure something out between this and the Dark Crystal show.
Posted by Jeff McGinley at 11:00 AM

Email ThisBlogThis!Share to TwitterShare to FacebookShare to Pinterest
Labels: TV

I don't know that I agree with you about Geralt's static nature. The first series is interesting because Geralt's storyline actually is an adaptation of a number of short stories, which have been turned into a cohesive narrative. (Yennefer's story, in contrast, was written whole-cloth, and Ciri's is the start of the novels proper.)

I don't think Hisslich and company get enough credit for what they did with Geralt. In the books, the short stories aren't even in the same order. But by putting Renfri's tale before the Striga, then the banquet, then Yennefer, we get a beautiful sense of progression that establishes a nice emotional arc for Geralt. But that's entirely an invention of the adaptation from material that is by necessity separate and static.

I THINK next season is going to correspond with the actual start of the novels, though. So we're going to see Geralt's storyline follow what's established in a long running series: probably a lot more development and movement over a fairly long span of time.

I was working toward saying Geralt is more static than other characters in the Witcher but not as static as Conan, and giving the women more detailed stories like they did here would have helped Conan." but that was wordy even for me.

I knew they hammered a bunch of short stories into a cohesive arc by adding their own bits to it, which is really impressive. I didn't realize they reordered them to make it flow better with the story they created, that's extra cool.

Given how well they did this season, I would hope and expect that even if it follows the novels proper there will be a large amount of original material mixed in.

Thanx again for reading. See you next season.