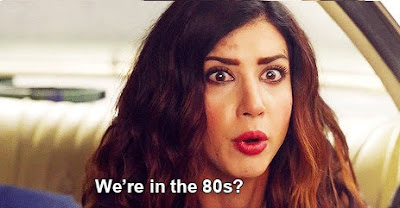 Warning
This post contains bad, foul, filthy and unacceptable language - the words that “will curve your spine, grow hair on your hands and maybe, even bring us, God help us, peace without honor.”
This is not a post for children.  Kids, take a hike.
This is also not a post for those adults who are offended by this type of language.  Do yourself a favor, and go read some of my cute stuff before moral outrage can kick in.
Just about everything else on this blog is clean…Stupid sometimes, but clean.
End of Warning.
Another Dana Award proves I'm clearly using this year's George Awards to make up for multiple shows I watched without writing reviews. 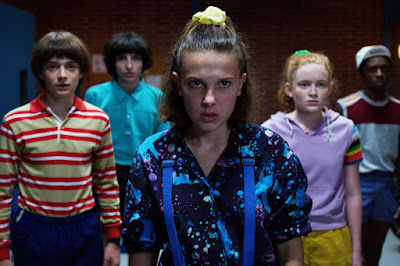 Stranger Things started strong, Anabelle began watching it, I caught up, and we finished the first season individually around the same time.
Then we watched Season Two together...
Then neither us of us could get excited about watching Season Three for almost two years.
That's a pretty telling review for Season Two right there.
"The Boy" convinced her to watch the Third outing of the Hawkins gang, and she let me know it was excellent.
I watched it very quickly as well.
The opener was a little heavy on the "hey its the Eighties vibe" and I was initially hoping for a storyline of "Joyce and Will get sick of everyone else's crap and kill them all."
(It's really hard not to always root for Winona Ryder after growing up watching her in all sorts of weird genre stuff.) 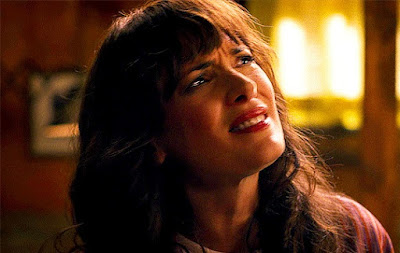 However, once things got moving and the John Carpenter-esque tone took over, it was the best season so far.
The Eighties was the highlight of horror-comedies that were actually scary and Season Three channeled that vibe amazingly well.
The characters veered back into more likeable territory for this one.  Steve's character arc from popular, jerk-ass bully at the start to where he's basically the most compassionate one and the emotional core of the group has been amazing.
The fact that the story looked like a typical zombie tale, but worked in both body snatcher and Lovecraftian body horror kept the audience guessing.
It had a well done and satisfying, if downer, ending, but with one season left, I'm sure they'll fix some of the sad parts.
As for the Dana Award for Profanity in Television Moment, this season was the first dropping of a Stranger Things  F-bomb.
Will totally deserved the honor, and what would have been the resulting Dana Award, when he destroyed his fort after his friends continued to act like a bunch of jerks.
However, his was only  implied and covered over due to the storm in what was a hell of a scene. Instead it was spoken by possessed mega-psycho- possessed-bully Billy.  Since these are my awards, a bully is not getting one.
Therefore,  it goes to the always awesome Dustin, played by Gaten Mtarazzo.