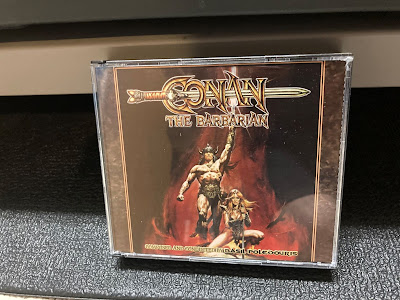 By now, I'm certain it comes as no surprise that a large number of orchestral soundtracks have made it into my collection.
I have albums of entire franchises, several by John Williams. Almost all of Star Wars is in there, including "Complete Soundtracks" (which, due to bonus tracks tend to run longer than the movies themselves) of the Original Trilogy.
In yet another "no duh" included in my collection is a complete soundtrack of Superman: The Movie.
Speed is required for acquiring complete soundtracks as they tend to be limited pressings. I missed a recent one of Howard the Duck.  It made me sad, but my family seems unabashedly pleased by this turn of events.
I've got all of Howard Shore's Middle Earth music, with some completes in there as well,
Every available season of the returned Doctor Who plus a decent collectors set of the classic series,
All of Pirates of the Caribbean,
A complete Dark Crystal,
Jurassic Park and several other franchises,
A whole playlist of John Carpenter music,
Plus multiple representatives from the Marvel Cinematic Universe,
Various DC films,
Superhero movies from before there were shared universes,
and piles of others.
However, there is one orchestral soundtrack that stands a mighty thewed head and shoulders above the rest:
The score to Conan the Barbarian by Basil Poledouris.
The other work of this former redshirt including, Robocop, Small Soldiers and Starship Troopers is excellent, but Conan is stellar.
I've read several reviews by people who know more about music than I (that list includes just about everyone, something I'm sure I have made obvious with these posts) calling it not only an excellent soundtrack, but a fantastic piece of classical music in its own right.
The fact that a composer of one of my other favorite orchestral soundtracks, Bear McCreary,  tweeted this was his choice for best soundtrack made my unhealthy fascination with it feel more acceptable.
It has complexity, tender moments, repeated interweaving melodies, and several of the most powerful passages ever recorded.
This music has the distinction of the first I had to hunt for to fill in on the original "Mighty Stuff" tape.  The recording on that tape was made by holding my boom box next to our old console television speaker to capture Mako's  opening narration and the opening theme, followed by the "Riddle of Steel" speech by William Smith (Conan's Dad).
Eventually I upgraded to a cassette of the soundtrack, which I proceeded to wear out in the car and while exercising.
The selections from that score are the most common ones I would "play" in my head while on my marathon swims to keep timing. I varied between "Anvil of Crom" (for inspiration and power) "The Wheel of Pain" (for focus and pushing through) "Riders of Doom" (for stability and pacing) and "The Orgy" (for a jaunty lap).
The tape died before I could transfer it to CD, but luckily I caught the limited release of the COMPLETE soundtrack. It has all the tracks from the film, unused or alternate cues, and the original album which comprises highlights and edits, plus some narrations.
Over three hours of glorious Cimmerian classical music.
"What is best in life?" indeed.
Come back next week for the end of this silliness in a celebration of what is simply the GREATEST running tape ever recorded in the human history...
or Cybertronian history.
Click Here For Index.
Posted by Jeff McGinley at 1:55 PM

I like these posts, because I can go on Spotify and listen to some of the music you mention.

If there's any music, I would say I'm a little less ignorant about it would be probably film composers.

I know Bear McCreary from The Walking Dead. I went to his Spotify page when you mentioned him in regards to Godzilla. I was surprised to see The Walking Dead not listed in his most popular songs.

I'm tempted to look at all the composers I like and see how many are known for what I love them most for.

The other day I had a Doctor Who song in my head...have to go look it up. I think it's an 11th Doctor one.

Found it. It's I am the Doctor.

Now I'm going to listen to the Conan Soundtrack while I play Minecraft.

Clarification...I mean "known for" in terms of what's most popular on Spotify.

Thank you, that's pretty cool. I had no idea Bear McCreary did the Music for SHIELD until I looked him up for Godzilla.

Its funny what you miss when their compositions are years apart. There are some phrases Hans Zimmer used in Gladiator scenes that are almost note for note matches for famous Pirates of the Caribbean tracks.


"I am the Doctor" is one of my favorites a really "driving" tune but with a lot of fun fiddly bits.

thanx for taking the journey.