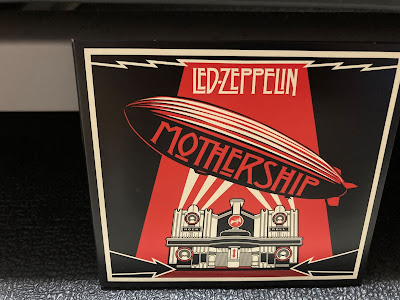 In the past few years something weird happened.
I found myself dusting off my Queen CDs, then purchasing albums by Elton John, the Doors, David Bowie and the Beatles. (Leading to Anabelle's expanded discovery of the last one.)
Could it be, that after a lifetime of Comedy, Novelty, Metal and assorted musical crap I was developing good taste?
The Horror...
Since I still listened to all of that...
Crap, I guess...
there wasn't any real cause for alarm.
I figured out that because of the complete transfer to having my navigation system also contain my playlists, I absolutely never listen to the radio anymore.
Given I'd always tune to the local rock station during some drives wherever I was, I suddenly lost access to all these frequently played artists.
This led to the purchase of the "bonus track" item listed in the post since I never owned a Led Zeppelin album in my life.  However, since everywhere I have driven during this mentioned life, (or any other I know of) there have been at least two, and often up to four stations that had at minimum weekly, but usually daily, "Get the Led Out" sections, leading me to drive to Page,  Plant and friends with some regularity.
Aside- my very cool great aunt in Florida ran a cleaning service that included some well known clients, that's why I always think of this band's lead guitarist as, "That nice boy, James."
After a while of the randomized playlist, high tech modern music experience, I realized I missed those Classic Rock driving moments.  Our second visit to The Play it Loud exhibit at the MET drove home I had yet to add Zeppelin to my collection. I looked around and found a "best of" with some songs I knew and many I didn't.
I then experienced a realization that will be lost on modern music fans who listen from the mystical cloud that always lists the name and artist of the songs.
It turned out I knew EVERY SINGLE SONG on the album very well.
I just had absolutely no idea what the titles were...
And in many instances I thought two (or in severe cases three) of them were actually one single song.
If the rest of this list hasn't made it clear that I'm musically clueless, I figured I'd use this "bonus track" to ram that notion home.
Come back next week for some lame excuses to talk about a whole bunch of albums.
Click Here for Index
Posted by Jeff McGinley at 2:00 PM

Email ThisBlogThis!Share to TwitterShare to FacebookShare to Pinterest
Labels: music

I was actually going to skip this post, because I'm so ignorant about music. But then I decided to give it a try. I'm glad I did.

I can really relate to knowing songs but not knowing the titles.

I also tend to be aware of current popular singers but have no idea what songs they sing.

Thank you, glad you joined in. As you can see, the whole point of this series is I am completely ignorant about music. It's nice to know I"m not alone.