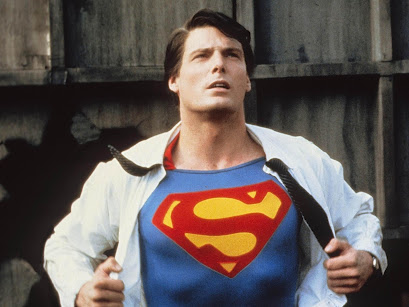 What better way to celebrate passing a thousand posts on Monday than by revisiting what was part of the first of many geeky superhero rants of this blog, only four posts in: Talking about the Christopher Reeve Superman films.

Especially this close to mom's birthday!

We had watched them when Anabelle was very small, so she’d seen them but had not reached her current ability to Mystery Science Theater them, or recall them in a “Bucket Junior” fashion.

We’ve been working our way through the Timm-Dini Verse Animated shows plus we’ve finished Batman ’66  and its follow up in awesome animated  insanity:  Batman Brave and Bold, plus several of the newer DC Animated direct market films and even the classic Fleisher Superman shorts.

One interesting note about all of those: Batman, on screen and in comics, tends to vary all over the spectrum in his interpretation, with a few key points holding the character constant.

The versions of Superman are much more aligned with each other, and also tend to start with the origin story more often.  I think it has to do with him being the first super hero that his origin is used to set the tone for the universe.

With all these versions of the characters, it seemed like a good time to revisit the classic live action films.

Classic translates in to worthy, valued and precedent setting.

The original will always be my favorite super hero movie.

Christoper Reeve will always be my Superman and the voice I hear when I read comics is his.

However, there is another aspect of the term "classic."

“Classic” usually indicates stories made for another time.

This is the textbook case of how to do the three act superhero origin story.

This is where John Williams created the most iconic use of “rising fifths” that appears in all Superman themes before and after.

This is really where it started.

And Tim Burton’s Batman established the idea of a merchandised, superhero blockbuster.

But Superman proved you could make a major motion picture about a superhero and treat it seriously.

Even though director Richard Donner and star Christopher Reeve were the only ones who really treated it seriously their efforts shone through and made the film as significant as it is. The thing is, though, this really was a product of another time for two key reasons.

The first is that this is Pre-Crisis Superman.  Clark Kent is the disguise he wears.  Reeve was perfect at showing a split, but his Cary Grant like goofball Clark was out of place to my daughter, raised on the modern version of the character where, opposite of Batman, Clark defines who he really is.

The second, is that this is one hundred percent a seventies film. They didn’t know how to do superhero blockbusters yet, therefore, they made what they knew.

This is a classic disaster film of that era with a costumed main character.  The destruction of Krypton at the beginning and the destruction caused by Lex’s missiles fit right in with Earthquake, The Towering Inferno, and Avalanche.  There’s a whole lot of set up, and then a mess of miniature damaging chaos.  Superman mostly lifts heavy things and fixes damage.

The helicopter and train scenes still give me goose bumps, however.

The pacing is slow by modern storytelling standards, and the cartoonish bad guys had Anabelle saying, “This film is a trip” quite a bit. Hackman was awesomely, ridiculously over the top, as were Beatty and Perrine.  But that over the topness worked great for these zanier, silver and golden age type villains. 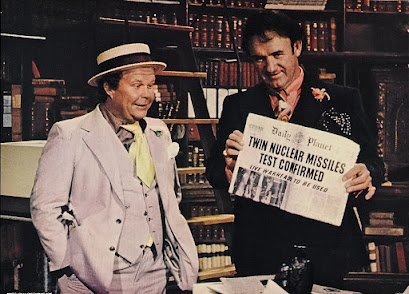 Lois varying between overly sarcastic and mean to Clark but acting like a fawning schoolgirl to Superman was another Pre-Crisis element that bugged my daughter.

What did catch her attention, and the main reason these are classics, is Christopher Reeve’s performance. Even after hearing me talk about it endlessly, the “Lois, there’s something I have to tell you,” scene made her go, “Whoah!” 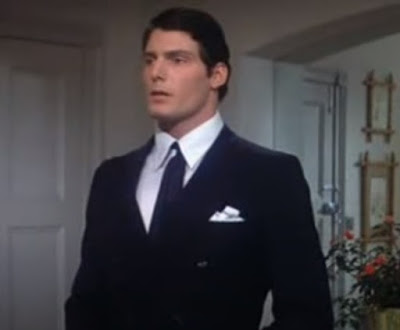 He’s just so ridiculously earnest in the role.

You believe him when he says he’s a friend, and when he mentions Truth, Justice and the American Way.

You believe why hard boiled Lois Lane recites poetry in her head when next to him.

You believe his happiness at rescuing a kitten from a tree, and his pain and loss when he can’t save Lois.

You even believe he’s angry enough to fly faster that the “time barrier,” as weirdly as that is handled and filmed.

In short…you believe a man can fly. 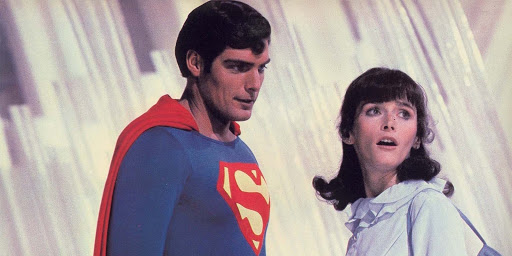 When this first came out it was a big step up from Superman lifting rocks and fixing dams. Heck, it had the greatest super powered cinematic fight scene we’d ever seen!

Let’s be honest though, it was pretty much the only super powered cinematic fight scene we’d ever seen. Anabelle has grown up in the world of the continually expanding MCU.  The fights in this movie were basically more disaster film stuff with people in odd costumes.

Her biggest problem though, was one of the main selling points of the film. For Pre-Crisis fans of the character, seeing Lois and Superman finally together was a huge deal.

For someone who knows the Post-Crisis story that Lois and CLARK are married…eh, not so much.

Anabelle was absolutely livid that he’d be dumb enough to give up his powers after using them to save millions in the last film.  She also had a few issues that they were able to walk and rent a car to get to and from the arctic without powers.

There were supervillains this time, and Terrance Stamp's scenery chewing monster of Zod is always a joy to behold.  I don't think anyone else could have pulled off, "KNEEL BEFORE ZOD!" with the power and authority he did.  The old school idea of giving the big bad goofier sidekicks hung around though, and didn’t impress her all that much.

She did cheer for “General, Would you like to step outside?” 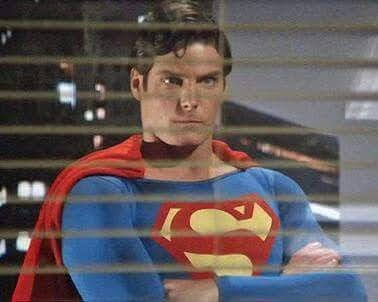 It comes out when he "accidentally" falls and puts his hand in the fire. Anabelle was impressed with his transition there as well.

The change in directors caused her issues though, even though she didn’t know it specifically.  And I’m not only talking about the “Saran wrap of entrapment” power.  With the “depowered Kryptonians going off to jail” scene cut out, after seeing them fall into the ice crevices, she said, “They’re dead.”

It was hard to tell what she complained more about.  Lois and un-Superman’s night together, or his Super-amnesia kiss at the end.

Again, it comes back to what was the moment Pre-Crisis fans waited for becoming weird and creepy on both sides compared to the relationship Lois and Clark have in the modern version. Lois only loved Superman, but Clark wasn’t real anyway.  And Superman felt he couldn't truly be with one person because he belongs to the world, which makes him more alien.

Still, good fight scenes, and Reeve is fun to watch as Clark, and inspiring as Superman.  It is a product of its time and stands as a classic (both sides of that definition) with the original. 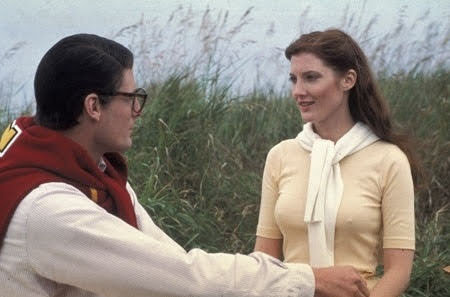 Now is where I get controversial.

The third film was poorly reviewed and remembered.  It has far more silly elements and a weirder storyline.

It is also my daughter’s favorite and the one I feel holds up the best today.

Granted every time Richard Pryor did anything, Anabelle said, “He makes me feel unsafe.”

But he WAS doing things. The pace of this one is faster than the other two.

Clark and Anette O’Toole’s Lana had much better chemistry than the Clark-Lois-Superman triangle in the other films.

And it is Clark and Lana.  Clark is more of the real person in this one.  This comes out when they slow dance at the reunion (after his hilarious fast dancing), the picnic together, and when Clark meekly but firmly rebukes Brad at the bowling alley.
The realness of Clark is exemplified by the split scene. 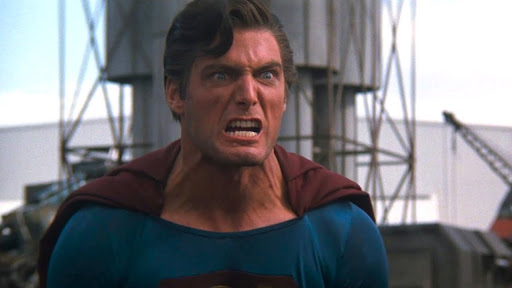 Reeve adds to the demonstration of his acting prowess by being absolutely terrifying as evil, but still conflicted, Superman.  (However, to this day it bugs me that they didn't make the fake Kryptonite red.)

Then there’s the bad guys.  Robert Vaughn and Richard Pryor’s creation function as the Post-Crisis versions of businessman Lex Luthor and mind control robot Brainiac three years before the Byrne Superman reboot that introduced them.

This is a fun movie.
The jokes are good, it keeps moving, and the characters work better and align with where they evolved to in comics and media later on.  It kept Anabelle’s attention the whole time.  She made a few comments here and there but it was easily her favorite.

That led to an enormous problem with continuing.

Me- “The next one is terrible, where he has the 'rebuild the great wall of China' vision.”

Anabelle- “That never stopped me before, (Said the girl with Batman and Robin as her favorite of those movies) I’m sure it’s great.  Is Lana in it?”

Me- “No, its Lois and some other woman.”

Anabelle- “Then I never want to see it.” 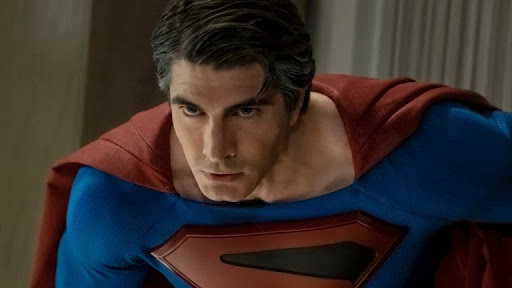 Seeing Brandon Routh as Kingdom Comeish Superman in the TV Crisis on Infinite Earths crossover  is how we started talking about watching these again since Anabelle never saw Routh's movie.

Granted once he disappeared in Crisis, and after being upset that Kevin Conroy was used as a mentally deranged murdering Batman, we forgot to record the last two parts and never sought them out, so maybe it wasn’t all that inspiring.  Routh was great though.

Knowing we we’re skipping IV, she asked what the run time of Returns was and what it was about.

I told her about Superman being gone for years, and Lois having a son…

She was already not pleased and saw the run time was 154 minutes.

“Forget it. For that amount of time, I’ll watch Hamilton again."

On the off chance she ever changes her mind, I’ll put a link here, till then, farewell and... 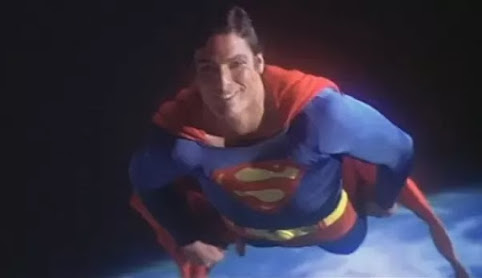 This is Anabelle. That other comment was me too. I filled out my name and everything but it went away :( i put my name in the comment in case it doesn’t work again teehee. Congrats again father :)

Thank you so much kiddo, the best part of these blogs has been sharing time and memories with you.
love
Daddy

Many thanx. Maybe Superman inspired me more than a little.