Spider-Man Trilogy Through a Kid’s Eyes 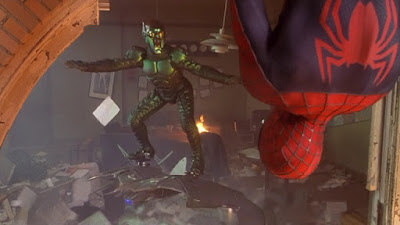 My daughter has the family apathy towards Spider-Man.  However, even with my sharing that view, these films were high quality and important along with the X-men series as the beginnings of the current trend of superhero films.
Plus Tobey Maguire did a fantastic job.
With some memories from her early youth, mostly tied to a single gag she found funny, she decided to give them a try.  We watched the 2002 original, and in less than a week had watched its 2004 and 2007 sequels.
Fortunately for our enjoyment, but unfortunately for post content, Sam Raimi is quite the excellent film maker.  Therefore while the three of us had great family time sharing these films, there was no constant snarky commenting to be documented here. 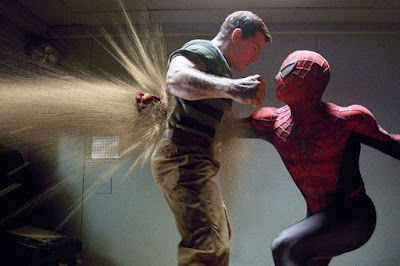 Yes, she laughed at, not with, the black suited, oddly dancing Peter and less than stellar Venom effects in the third one. Yet, the quality of the Sandman and Harry (the always awesome James Franco) arcs there balanced it out enough for enjoyable viewing. 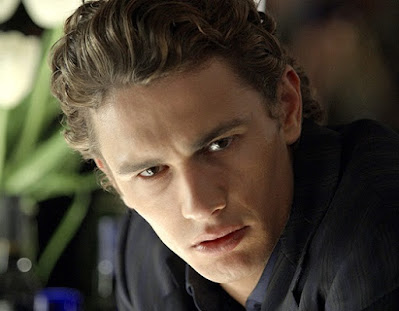 The origin in the first one is handled expertly, and swings its way (see what I did there?) into an exciting story. Willem Dafoe's Norman is terrifying in and out of costume, and the romance with Mary Jane, with Spider-man pulling Peter away from it, is spot on and builds in the follow ups.  All handled amazingly by Kirsten Dunst. 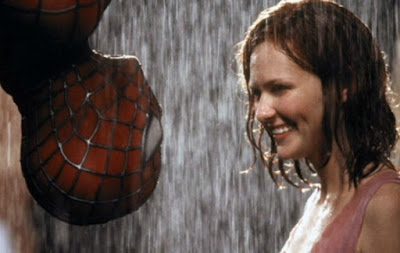 The second one had the gag Anabelle remembered.  It was Peter transitioning from a triumphant leaping, “I’m back!” to crashing in an alley and complaining, “my back.” 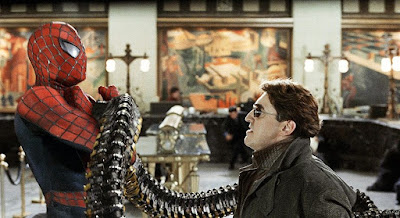 Like myself (and most viewers) Spider-Man 2 was her favorite.  The story grabs you all the way through, Alfred Molina did an outstanding job as a deranged yet sypathetic Doc Ock, the effects hold up, and like the other films, Raimi’s horror roots show through to amp up the suspense and surprises in many scenes.
We found it flipping channels on television a month or two after watching all of them on disc and watched it again!
And I noticed something new this time!
Bruce Campbell and Ted Raimi’s roles have been obvious to me since my original viewings. But it wasn’t till this time that I noticed Dan Hicks as one of the train passengers.  I guess I never expected to see Evil Dead 2’s Jake in a business suit.  He’s right behind Peter and the guy in glasses when Spidey’s trying to stop the train with his webs. 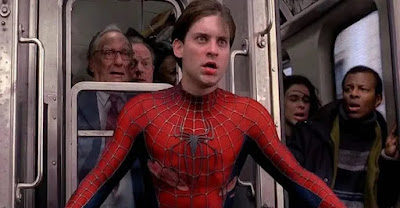 While the Marvel/ Sony Spidey films are a fantastic piece of the overall Marvel Cinematic Universe they created, individually they lack some of the epicness these old ones had, especially when it comes to placing Spider-man in his natural habitat, Manhattan.
The New Yorker "compassion but with an attitude" shout outs are also perfect.
Teen Peter only existed in the comics for a short time.  The new ones have expanded that perfectly since Spider-Man joined the MCU as a newcomer much later.  Tobey Maguire really nailed that “beleaguered everyman” quality of someone growing up, that the original Lee and Ditko comics were built on.
And, as Anabelle pointed out every time Rosemary Harris was on screen, Aunt May is awesome. 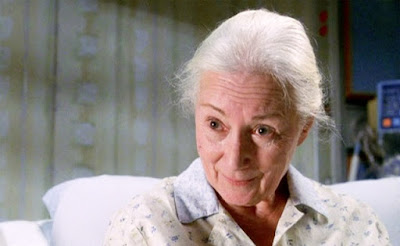 That’s about it.
Now you know why I spend so many more posts on bad movies than good ones.
Even when it’s a less enjoyable experience, it’s a better source of material. We both saw clips of them and weren’t inspired to go further…maybe we should try the Amazing Spider-Man ones after all?
Still, revisiting the classics made me extra excited for Sam’s upcoming take on another Lee/ Ditko creation, DOCTOR STRANGE!
Maybe we'll get to see Bruce as a version of Mysterio after all!!!