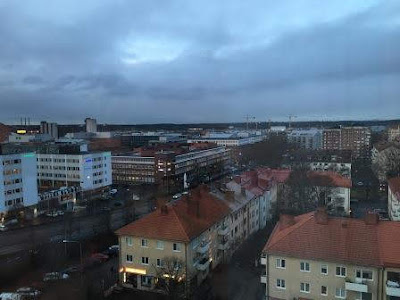 I got up in time to go downstairs for the cab.  I could have gotten up earlier to fully sample the fantastic breakfast again, but that morning hour was part of my “brain off” time following the late night meeting. Before going down, I added to my normal lucky Batman wardrobe choices, just in case.  Right next to the elevator exit was a small “local vendor” tray with donuts on it.  I grabbed one (knowing my main meal of the time travel filled day would be airline food) as I headed to the desk.

Or maybe hotels are.

The checkout sign said the key had to be turned in. I explained that my daughter collected hotel keys from when she was little and could I bring her a first European one.  The clerk said, “Of course!” and then offered a hotel pen to bring her as well.

In case I haven’t mentioned it enough, Swedish people are super nice.

She told me where the cab would pull up, but explained that it would arrive on time.  Silly me, I’d gotten there fifteen minutes early to match the time rides to the airport show up at home.

This left just enough time for a coffee so I wouldn’t have to buy a soda in the airport.
And another donut! YUM!
Yes, travel anxiety and the threat of airline foods outweighs cardiac diet needs.

I saw a “Taxi Stockholm 150000” pull up in the area she said at my appointed time Therefore, I went out to meet it.

I started, despondently, back to the hotel in the mostly dark and quite soggy morning, until I saw it make a loop and return.  Our confused conversation revealed he wasn’t my cab but was available and asked if I needed a ride to the airport.
(The suitcase must have given me away.)

Suddenly, a second Taxi Stockholm 150000 rocketed around the loop, pulled up behind the first one and started yelling in Swedish at the other cab driver and calling my name.

Yes, one cab tried to steal a fare from his own company.

I got in the right cab and was taken to the airport.  Passing through the "Much less crowded than Newark" International Airport was a breeze.  Since all the stores in Old Town were closed, I grabbed a couple of fridge magnets for my family in the duty free shop.  This is where I learned I put my wallet in my computer bag and not in my pocket after going through security leading to one last (of many) MASSIVE pre-travel panic attacks when I went to pay.

Customs was a breeze again.
“Anything to declare?”  “Nope” *stamp*.

She asked if I wanted to go in this early, since no shops or anything were past that point. Makes you wonder why they insist you get to the airport that much before the flight doesn’t it?

I settled down with my book in the hallway between gates. The flight at the gate across from ours was leaving for Spain shortly, but otherwise the place was empty.  I read a while, and soon my fellow travelers joined me in the hall.

The announcement came on that we could enter the gate area and a Swedish gentleman my age and I stood up at the same time.  We both made the groan described as “My Father’s Noise” on Welcome Back Kotter.  Then we locked eyes, smiled and nodded weakly.

The plane was exactly as empty and the service was exactly as fantastic as on the way there.  Quick boarding, no overbooking, and an on time take-off that led to an early deplaning, even in Newark. 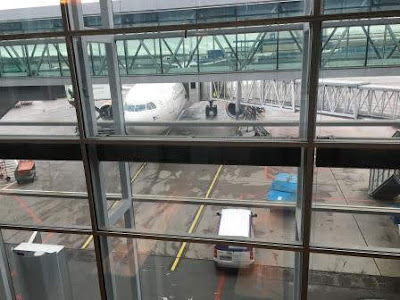 The flight was longer on the return though, almost nine hours against the jet stream, but due to the time difference was only three hours realish time.  The first meal was a regular lunch, where I used the same assembly method to make a sandwich as I did on the way out.  The second “meal” was biologically six hours later, but in New Jersey time was the lunch again.  They gave us a cheese wrap and some sides that held me over until I got home for dinner. 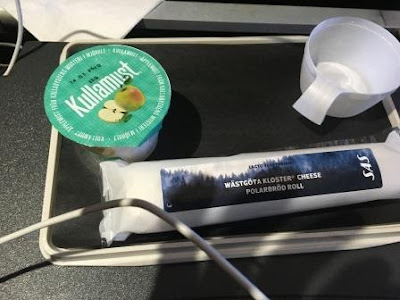 On the way to Sweden, I planned to read all comic books. However, I got into the Monty Python stuff and read that most of the way. I planned to finish the Python books on the way back. Of course that meant I got into the “Savage Hulk” magazine comic reprints from back when the Bixby/ Ferringo show was on while waiting to board, and tore through twenty-two oversized issues before landing.

Since there was no room to read the big paperback while I ate, I watched Deadpool 2 again.  The guy in front of me was leaning back, forcing me to choose a film that I knew well. I still laughed out loud a lot.
Sorry fellow passengers.

Later on I put on Godzilla King of the Monsters while I read, listening along and looking up at the fun kaiju parts.
WOO HOO!!!  I would have watched it again immediately but we’d land before the climactic fight started.

Most of the time I used my seat and the empty one next to me (woo!) to serve as navigation information. Besides the normal “Airspeed/ map/ time to arrival” readouts I usually look at that every plane has now, this one also had camera feeds. There was one pointing straight down, and one pointing forwards.

Most of the trip, they showed clouds.
(Dark and soggy followed me home.)

However, there were two extra cool moments.

The first was the break in the cover as we passed over Greenland, allowing awesome views of ice and glaciers and stuff. 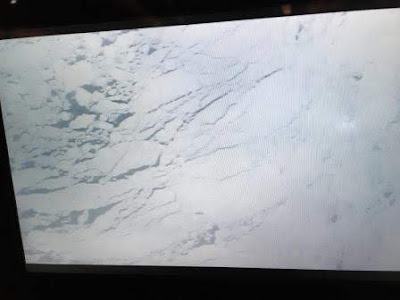 The second was watching the nose camera as we came in for a landing.  Weeeeeeeee! 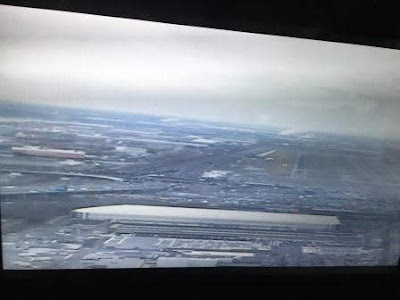 I dutifully filled out the blue customs paper while in the air. I hadn’t learned the lesson from Peru: with the kiosks, you don’t need to do that anymore.  I realized Sweden had spoiled me while I was waiting on the long snaking line.  The American citizen one was a shade shorter than the other, but compared to the speed they processed me in Scandinavia it was a culture shock.  I’m pretty sure the EU citizens didn’t have to slow down as they went through their check point. The Customs agent may have just stamped them on the head.

I found my driver, and was taken home to my loving family.

And after showering downstairs, changing clothes, and spraying my suitcase with Lysol, they gave me a warm hug and welcome home.
Shortly after my return, no one on earth was allowed to go anywhere for months (and counting for this country).  No wonder I never travel.

The wallet thing really stressed me out. But then I read again and realized it was your computer bag...and you probably didn't check that. I was picturing your wallet lost to you until landing. I know you'd get food and drink from the airline. Still....

I'd be very excited about seeing Greenland.

Thanx for sharing the journey, and the sympathy. The notation is short because I found it quickly, but those moments of searching were agonizingly long.

Greenland looked cool from overhead, but that was enough for me.