New Who Views- Assistants, Companions, Best Friends and The Fam 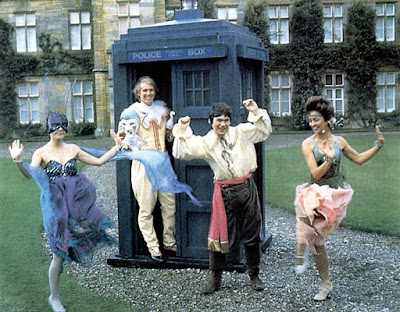 It’s been a while since I’ve done one of these.  Thanks to the BBC finally releasing seasons of the classic series, I’ve been revisiting some Fourth trough Seventh Doctor episodes with my family.  I’ve also been watching the extras on the Twelfth's boxed set, the Thirteenth's season is fresh in our minds, my nephew is getting into the show so my sister's family is revisiting Nine (Don't skip Nine!) and we’ll always watch Ten or Eleven if they happen to be on.

The comparisons got me thinking about the companions.  I pointed out on a Facebook post that the Fifth Doctor episodes knew how to handle a crowded TARDIS.  Then I had someone else counterpoint that when Peter Davison had three companions, someone was constantly passing out for an episode and they actually killed one of them off.

That is extremely difficult to argue with.

It made me wonder why those episodes that had the same number of time travelers yet they'd ignore some of them periodically felt like there were better Doctor- Companion relationships going than the current series.  Those stories were some of my first entries into the Whoniverse, but there was more to it.

Side note- Watching things at different ages gives one very different viewpoints.  I was still a kid when I first watched the series.  All the companions were older than me, so I got a vague sense that Adric was less mature, but Tegan and Nyssa seemed about the same.  Watching those episodes now, Tegan and the Doctor are clearly the adults of the gang and, while more book smart, Nyssa and Adric are the “kids.”

Watching some Fourth Doctor episodes featuring Sarah Jane made me remember an interview with Elizabeth Sladen that helped me figure it out.

When asked how she viewed Sarah’s relationship with the Doctor, she said she played it as if the Doctor was her very best friend in the entire universe that she’d do anything for.  This, and her general fantasticness, is likely why she ended up at the top of nearly every "Favorite Companion" viewer poll ever recorded.

I think that’s when the show works best, at least for me.  Early on with Ian, Barbara, and especially Susan, the Doctor was more in the mentor / teacher role.  In general then and afterwards, there were male and female couples where the male would handle the action and the female would get captured.  The classic show often called those travelling with the Doctor “assistants” while the word “companion” does apply much more to the new series.

This is especially true with the companions having more developed home lives now than the classic series had.  The new series has another advantage for emotional links, the existence of the old series making it obvious how both awesome and terrifying being a companion can be.  It showed it fantastically in the very first episode with Rose and Mickey's reactions.  In addition, that knowledge is a base of what makes the Doctor invite someone in.  My favorite version of that was when he met Martha and the "other one."  (Probably not a coincidence that Martha was the most "classic series" like companion of the new run- no extra powers, no transformations, and no horrific ending, just a decision that it was time to stop.)  A close second was the Doctor's assessment of Bill, "Well, most people, when they don't understand something they frown. You...smile."

Sarah Jane definitely codified the “best friend” idea into the form it’s carried through into today.  Liz and Jo were much closer to assistants (of varying degrees of usefulness). I think the first instance of a “best friend” in the TARDIS came before Sarah Jane though- Jamie.  The second Doctor was much sprier than the first. While Jamie still was younger and hardier, there was much more of a “two mates soaring around the universe” vibe with them.

It applies to the new series as well, as a personal preference. My favorite modern companions were Donna and Amy(&Rory), both clearly the Doctor’s best friend.  I’ve pointed out how romance feels off before.   This is likely why I liked Clara better with Capaldi than with Smith. However, when Bill came along and the Doctor went back to a mentor role. those were some of my favorite episodes with him It's partially because there was added fun with Nardole watching over him for River.  More importantly, the "best friend" dynamic was back with a twist as he tried to redeem Missy.  It's also equally likely that I will say there were "some of my favorite episodes" in any season of any Doctor.

There’s something about the idea of the Doctor wanting to experience all the wonders of the universe through the eyes of their best friend, and the companion willing to take all the ridiculous risks inherent in travelling with their best friend that works in the dynamic of the series.  It feels stronger than romance or teacher related reasons.  You’re just as likely to stay home as go out with a lover.  You’ll go on planned, and monitored field trips with a teacher. But only with a friend will you yell out of nowhere, “ROAD TRIP!!!” and wander off on adventures.

This bond, coupled with how much more emotionally tied we are to the companions in the new series, ups the trauma level when they leave as well.  The reasons for leaving are shown differently in the classic and modern series but come down to similar ideas.  The Doctor does make people better, and that's taken to a logical conclusion.  When the companion starts to become Doctor like to the point that they don't need him as much, and are starting to take the wonders and risk for granted either he pushes them away, they evolve away, or they leave because they realize they HAVE lost the wonder and/or the fear of risk.

Also, it provides an in universe explanation why the Doctor tends to be such an overbearing jerk to the male companions.  As Danny Pink pointed out in “The Caretaker”

“Doesn’t matter if he likes me or hates me, I just need to do exactly one thing for you. Doctor, am I right?….I need to be good enough for you. That’s why he’s angry. Just in case I’m not.”

That’s not someone viewing a rival for their affections, that’s someone watching out for their best friend.

Therefore, that’s why I feel the Fifth Doctor’s crowded TARDIS worked better than the Thirteenth.  “The Fam” as she calls them, are a bonded group, but they’re more bonded to each other, and she’s often separate.  Tegan was clearly the Doctor’s best friend.  The other’s he’s teaching, she’s the one he’s straight out sharing the wonders with, as he puts off taking her home.

And she’s the one who calls him out when he’s being too aloof, alien, or stuck up…no matter how amazing and powerful he is overall.