New Who Views: Doctor Who becomes Doctor WHY AREN'T YOU DOING ANYTHING??? 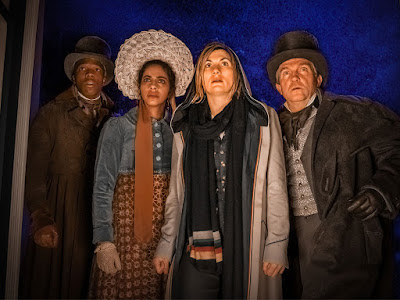 I was ready to give this season a mostly positive review.  Ignoring the heavy handed and badly executed “Orphan 55” the episodes were ranging between “enjoyable and passable” and “Yay! It feels like the old show.”


They finally started giving Jodie Whittaker force of nature level Doctor moments, where she appeared to be all bluster, but was the smartest one in the room and in total control.  Yet, she always maintained the compassion of the character.

The companions had cool arcs, and Graham especially was always awesome.

The Tesla, Fingers, and Frankenstein stories all worked really well and felt like old school episodes-  Third or Fourth Doctor era horror ones to be specific.

The plastic virus was a far better executed example of a lesson in a story than "Orphan 55" containing some cool Doctor moments.

The Judoon one teased a new mystery about the Doctor’s life and brought Captain Jack back…all too briefly.

He didn’t get to meet the new Doctor! And he was just as excited about that possibility as many fans were. I'm hoping it wasn’t just a cheap excuse to advertise Torchwood streaming on the BBC site and he’ll be back next season.

The first part of the finale was intriguing, opened a lot of questions and the characters worked well in it.

Then the season ended, with a thud.

I will give them that the CyberMasters had an extremely cool aesthetic design.

I know many of the old school fans watching the show as long as I have will classify rewriting the history of the Doctor and Gallifrey in the same bucket they put making the Doctor a woman, that it irrevocably breaks the show.

Honestly neither of those was my problem with it, and I've been defending it for a while in those circles.

The changes have potential for all kinds of storytelling directions, and if it doesn’t look like it will work, they can always say the Master was lying.  After all, the Doctor has been in the Matrix a couple of times before and saw none of that.  However, this episode acknowledged more of the old show cannon than it has for a while. "The Brain of Morbius" Doctors, the Seventh's Doctor's plot threads about not being a normal Time Lord, and the references to the Matrix and Panopticon, coupled with the "Mind Blowing" flashback scene all had deep ties to the classic series and some to the new one. (Heck, Tennant ended every season with a "what...What?...WHAT? clifhanger.)  If handled correctly it has the potential for all kinds of narrative directions, and while it provides some answers about the Doctor, raised a heck of a lot more questions, keeping the mystery alive.

My HUGE problem with the episode is the Doctor did NOTHING but look confused, defeated and tired for almost the entire episode.  Chibnall was so intent on having the Master reveal this new mythology (which I do admit had cool bits, thought it would make more sense if the Fugitive Doctor’s TARDIS didn’t look like a Police Box, assuming she's pre-Hartnell of course) he forgot Who the focus of the show is supposed to be.

The switch from, "We will use only new things" last season to "We will put a giant pile of continuity in a potato cannon, shoot it at a wall, and see what sticks," was also jarring.

I think the problem overall is Chibnall and company are so focused on "This NEW THING the Doctor has NEVER DEALT WITH BEFORE" happening over and over it makes her look weaker by being confused and surprised most of the time.  It is kind of like how the makers of the Justice League cartoon didn't notice until it was too late they had all the villains knock down Superman every episode in the first season to build them up, and it ended up decreasing him.

The Doctor was outclassed and out thought by the Master the whole time (a similar, if to a lesser extent, problem in the opener). It felt like the Master was the main character for most of the episode. And with all the explaining they put in this one, I think we deserved to know where this new incarnation falls after the Saxon/ Missy double wipe out, don't you? Maybe he did lie about everything and he's the Timeless Child?

The Doctor’s final plan involved self-sacrificing murder and genocide.  She stopped herself, once more looking confused, but then instead of the “there is always another way” that the Doctor usually comes up with, she was rescued by an old man.

1)  Having someone else commit murder and genocide in your place so you don’t have to self-sacrifice doesn’t count as “another way.”  It counts as “the non Doctory way is the only way, and the Doctor wasn’t strong enough to do it.”

2) If Chibnall and company really want to get the idea that a female Doctor is the same character as before with the same compassionate heroic qualities, having her be outclassed by male villains and rescued by male minor characters was not the way to do it.

The ending was basically the Anti-"Day of the Doctor" solution.  Wrong in every way that one was right.

I'm still constantly stunned that they made such a big deal about making the Doctor a woman, and then write her as more passive and puzzled than the Doctor has ever been.  Especially when Jodie has showed she can bring “the oncoming storm” when they give it to her.