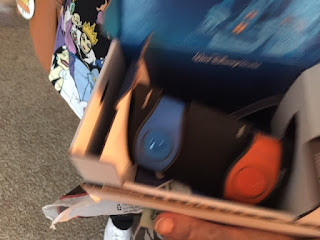 One month from today…
We'll be foraging for counter service lunch in MGM... and possibly contemplating a night hop to EPCOT extra magic.
More possibly, we will be falling asleep standing up on line for our food, but in Disney, there are always many possibilities.
[Later edit: There was hopping, yay!]

Grandma found a Figment shirt and realized another shirt was too old to survive the long Magic Kingdom Wednesday.   Anabelle updated the Shirt Grid.  It’s a family project!

One Month from Today…
We'll be discussing self face slapping techniques with a lunatic Hatter over breakfast.
This is the last "one month" note.
I'll be far too busy doing the "Less Than Three Weeks Until Disney World Dance" to focus on specifics after this.
THANX MOM!

Grandma made up a list (basically a Grid, its genetic) of all the Magic Band designs and names and sent it around:

The replies to her “No one cares” were fast and furious:

Aurora: I care very much.  It is beautiful.

Me: We are three generations of a Disney Gridding Family  of course we all care   Love the colors

Kim: I agree it is beautiful.

Veronica:  I do not. just kidding, its great!

Anabelle further takes point on the “Shirt Grid.”  Kim’s family got a bunch of new acquisitions and was working out where they went. It involved multiple calls to the two of us over the weekend. Me for general location questions and Anabelle for shirt coordination.   By the end of the night, Anabelle had re-color coded everyone’s matching selections. That’s my girl!

Holey Moley!
That was close! I didn't even know he was gone, I would have been in  a panic!
I just saw an article stating Sonny Eclipse is BACK at Cosmic Ray's.
Sometimes its better not to know things.
But he's back now, yay!

Allears has a “what Star Wars” should you watch/ read/ experience set of lists before going to different parts of StarWarsLand done by each of their contributors.  NONE OF THEM mention the prequels.

I called Disney Dining to find out how we can order from Be Our Guest online and have the meals properly credited to each room.  With all the Disney Magic they can muster…

You can’t.
Poop.
Guess we'll order when we get there again.

Aurora: I don't really care as long as we all get food.

Me: Thanx.  A Good attitude to have, young one.
I was trying to get food faster, but we’ll still get it.